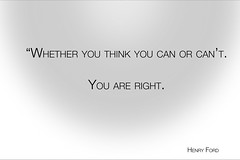 Who would you choose for your list of the 3 Greatest Sales People Ever? There’s no shortage of candidates when you consider all the fields where thought leadership, inspiration and calls to action nobody can ignore, stand out.

In sports you might consider Muhammad Ali – generally regarded as the greatest sports personality ever. But Ali wasn’t just a boxer. He was big box office too. Remember the Rumble in the Jungle and the Thriller in Manilla.

In entertainment you might choose Oprah Winfrey – who turned a day time chat show into the platform all the stars want for their confessions. Probably the biggest television show, ever.

In music there’s a very long list obviously influenced by your preference, but it would be hard to choose anybody other than Elvis Presley, who even today performs all of the time, all over the world, in tribute acts and look alike competitions.

In industry Henry Ford would be a good choice. He told car buyers “you can have any color you like, as long as it’s black”. And then look what happened.

In politics Bill Clinton would be hard to beat. Despite the many colourful stories about his personal relationships, and chequered history, he influenced political leaders around the world with his strategies for managing the media. He fought off the laser like investigations led by Ken Star, and survived the impeachment which resulted. Today he’s the goto man when a big name is needed to get important people doing things differently.

Each of these superstars would be included in the Top 3 list without causing an argument, but they don’t make it into mine. For me the 3 greatest sales people ever are:

His journey from B list movie actor to creator of a new economic theory – Reaganomics, the global leader who put an end to communism and the cold war, and the high priest of Republican politics even 25 years after his retirement, must unique. Reagan could easily be 1st in the list except:

Called in from the cold at the age of 66 to save Europe in its darkest hour – 1940 – with the Nazis having overrun Europe and baying for British blood in Northern France, Churchill persuaded the British people they could survive the German Blitzkrieg. He created new hope for all the subjected nations across Europe, from Norway in the north east to Spain in south west. He persuaded Roosevelt to fund and otherwise support the British defence effort. Ultimately he persuaded Roosevelt and Stalin to cooperate in destroying Hitler’s and Mussolini’s war machines. Listen to Churchill’s speeches. His rhetoric and delivery are inspirational even today But,

The man who transformed computing, telecommunications, publishing, entertainment, retailing, Information Technology, product design, product marketing, fashion – worldwide. This isn’t the place to list his achievements. Anybody reading this will know about them anyway.

Why would I choose Jobs over Reagan and Churchill? To be honest his achievements don’t really compare. The smartphone industry adds a lot of value, but not as much disarming nuclear weapons.

I would choose Jobs over Reagan and Churchill as the worlds greatest salesman because:

Reagan and Churchill sold people what they wanted.

People wanted whatever Jobs sold them.