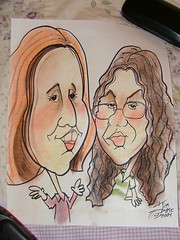 If you’ve visited Fisherman’s Wharf in San Francisco, you’ve undoubtedly encountered the many street vendors.  One of the most visible is those who promise to draw your caricature profile on the spot.  My answer to them these days when they “bark” at me to sit down and have my profile drawn is – “if you can make me look 10 years younger, I’ll do it!”

This next rule has to do with profiling.  Customer profiles have been around for a very long time.  They crept their way into sales methodologies, CRM, marketing, market research, and etc.  They have served their purpose in looking at demographics, psychographics, customer purchasing data, geographic concentrations, and other characteristics.   All these data points contribute to drawing up a customer profile that describes the characteristics of targeted customers.  Hence the next rule (see the first rule):

Rule 2: Don’t Confuse a Buyer Persona with a Customer Profile

This is a very common misunderstanding about a buyer persona.   I’ve seen many attempted descriptions of a buyer persona that describe them as a profile.   A buyer persona can include characteristics common to customer profiles however they are intended to go far beyond that to reveal deep insight into your buyers and customers.  An analogy that works well is that when an actor takes on a role, that role is described to him or her.  The role has a profile of how old the character is, what it might look like, where it fits into the story, and other descriptors.   The actor’s and the director’s job is to dig deep to reveal the motivations, the behavior, the mind, and hero-like or villain-like qualities of the role.  Some actors reveal insights into a role that were nearly impossible to have figured out before rehearsals began.

The downside is that this confusion creates a perception among senior executives about buyer personas that is off the mark.  Most have experience with customer profiles, which became prominent starting in the ’80’s.  It is problematic in the sense that the value of buyer personas is not seen and the mindset is to dismiss buyer personas as a mere profiling exercise.

Anyone who has ever sought executive sponsorship knows what I am talking about.  If the mindset is settled about what a concept is perceived to be, then the hurdle is that much harder to jump to gain executive buy-in.