It is an indisputable fact that small and medium sized enterprises (SMEs) contribute significantly to economic growth, job creation, innovation and business renewal. For these reasons, governments in several countries have made considerable efforts to facilitate the creation of new companies and encourage the success of established companies. Offering direct and indirect financial support, a simplified regulatory landscape, tax incentives to boost investments and providing access to applied research centre innovations are among the measures often used.

While these are important to the survival and growth of any business, other internal factors also play a critical role. The leader’s expertise, management and networking skills, and putting in place a solid corporate governance are also major success factors. In fact, it is often said that a company’s success and sustainability rest on solid governance. For a SME, this can take the form of an advisory board that provides strategic advice and guidance. Unlike a board of directors, it has no decision-making powers and no legal liability towards the company. The board of directors plays a decision-making role and handles administrative and legal matters. In this way, the board of directors and the advisory board complement each other’s work. An advisory board helps leaders develop a long term vision for the company and take informed strategic directions.

The Business Development Bank of Canada (BDC, 2014) undertook the first-ever Canadian study to show the actual results of advisory boards on the long term viability of SMEs. The research results revealed that today only 6% of Canadian SMEs leverage the use of an Advisory Board and are most often found in businesses that have been operating from 11 to 20 years, have 20 or more employees and are in the distribution, business services or manufacturing sectors. 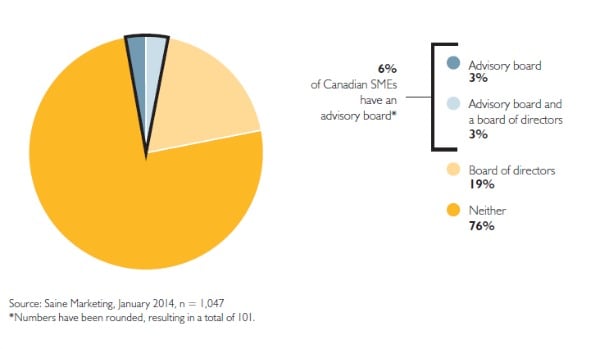 The main reasons that prompt SME leaders to set up advisory boards are the desire for complementary expertise, and the need for advice and support in decision making. In fact, 86% of leaders believe that having an advisory board has had a significant impact on the success of their business. Areas of impact most often cited are company vision, innovation, risk management and profitability.

A typical advisory board on average consists of 5 people although more members can be included depending on the objectives of the board. The skills sought most frequently by management are accounting or finance (65%), sales and marketing (51%), human resources (43%), expertise in the same industry (38%), and operational competencies (37%). In the majority of cases (56%), advisory board members are recruited through the company’s network of contacts.

Statistical analysis of businesses’ financial variables based on fiscal data from Statistics Canada shows that:

The study also compares the financial performance of businesses that have advisory boards with similar companies without a board. The study shows that, from 2001 to 2011: 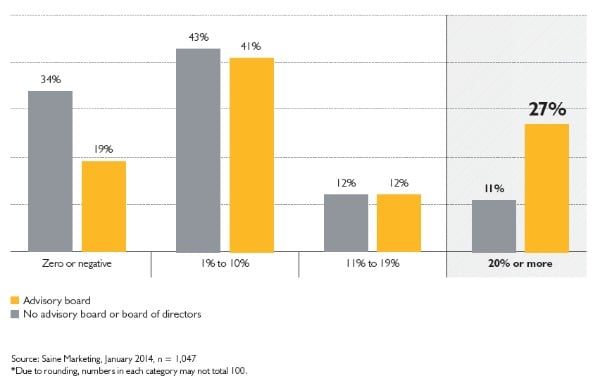 It is, therefore, not surprising that 80% of business leaders with advisory boards say that if they had to do it again, they would set up another advisory board. Many business leaders found their board to be an essential tool or “sounding board” to challenge the company’s management team and to bring rigor to their decision making process. In particular, their boards helped them with the following:

If an advisory board has been so beneficial for SMEs, then one could deduce that a board could be an integral component for entrepreneurs and startup companies. It is not unusual for the CEO of a startup to be a “one-man band,” personally seeing to every detail and micromanaging his business. Isolated, he tends to manage everything himself.

Given the positive impacts mentioned above, why have so few Canadian business leaders taken the initiative to set up an advisory board? In fact, survey results showed that 6% of those without advisory boards have already considered setting one up. The main reason they have not yet done so is the belief that it involves too much work, time and effort (57% of respondents). It should be noted that 18% of leaders with an advisory board would like or would have liked help in recruiting members to their board.

This perception is not entirely incorrect, since almost half (48%) of all business leaders with advisory boards state that it generates substantial work for management. On the other hand, 45% of them believe that the benefits of an advisory board should be promoted more. These benefits must not be underestimated.

So how can SMEs, who are already stretched to the limit, plan and execute effective boards? There are several agencies and consultants who can assist with the task of planning and project managing advisory board meetings without breaking the bank. Some companies can also offer up online solutions that can allow companies to continuously engage with their advisors at a fraction of the cost to live meetings.

So, there are tools and options available for SMEs, entrepreneurs and start-up companies to leverage the benefits of advisory boards without having to personally spend large amounts of time planning, preparing or spending a fortune booking meetings, hotels or flights. To reduce risk, try one of these options for a single touchpoint and see if you get an immediate return on investment of your time and money. This could be a key step in the establishment of strong customer brand advocates for years to come.