Because I wanted choice over my actions, I’ve spent a good portion of my life coding the trajectory of change so I could intervene to do something differently. I realized early on that knowing WHAT I wanted to change, WHAT doing it ’right’ entailed, and WHY I wanted to change, didn’t reliably lead me to the HOW of successful change, regardless of my willpower and discipline. Even my attempts at Behavior Modification were unsuccessful.After studying brains and how they generate behaviors for many decades, and after trying unsuccessfully to try to change some of my own habits, I realized the problem: because behaviors are merely mechanical responses (outputs) to how my brain is programmed (inputs), real change can only come by rewiring my brain. In other words, I’ve been doing it wrong.

Seems by merely trying to change a behavior by ‘doing’ something different – a behavior being the output of a series of brain signals – I failed to change my brain circuits at the place where the behavior is initially prompted.

How is it possible to consciously change our brains, you might ask? I spent decades figuring it out. And I’ve made it possible to generate new circuits whenever you want to change a behavior or habit. Let me explain what’s going on, and then I’ll introduce the program I’ve developed so you, too, can permanently change behaviors at will.

Brains require a very specific sequence of activity to generate behaviors: First we

Our behaviors are merely the output of our brain’s signaling system, the response to a set of instructions that travel down a very fixed pathway. They are not stand-alone features, or values-laden actions, but the activity, the output, the response, from a series of electro-chemical brain signals that have no meaning at all.

It’s like putting liquid red rubber into a machine and a red chair emerges. Something inside is programmed in a way that produces ‘chair’. If it were programmed differently, even using the same red rubber, a ‘ball’ might emerge. It’s all in the programming.

These brain signals, this specific circuit that carries out that specific behavior, is hard-wired. And once we have a circuit for a behavior set up in our brains, it becomes a habit. Hence, the problems we all have when we attempt to change an existing behavior.

HOW TO GENERATE NEW BEHAVIORS

The good news is that our brains are more than happy to generate new behaviors when they’re reprogrammed, which we do by developing brand new circuits (neuroplasticity). I’ve spent decades unwrapping the ‘how’ to generate new messaging and circuits and the steps involved, eventually developing a training model of change facilitation that I’ve been teaching in sales (Buying Facilitation®), leadership, and coaching for 40 years.

Recently I developed a new model to facilitate others through the steps to generate new circuits for their own new behaviors (i.e. transformative change) and ending old habits – not to modify what’s there, but to actually consciously transform their brain’s pathways for permanent behavior and habit change. It includes:

Take a look at the program syllabus: http://buyingfacilitation.com/blog/wp-content/uploads/2020/09/how-of-change-syllabus.pdf

Here is a chart of the elements of The HOW of Change™ model. It isolates the brain elements necessary to generate new circuits that will create new behaviors, habits, ideas. Certainly our brains are able to generate new circuits (but they cannot get rid of existing ones), but to do so requires very specific elements be included in a very specific sequence. It’s really not as simple as merely doing something different. Take a look at the chart as it explains the trajectory of change: 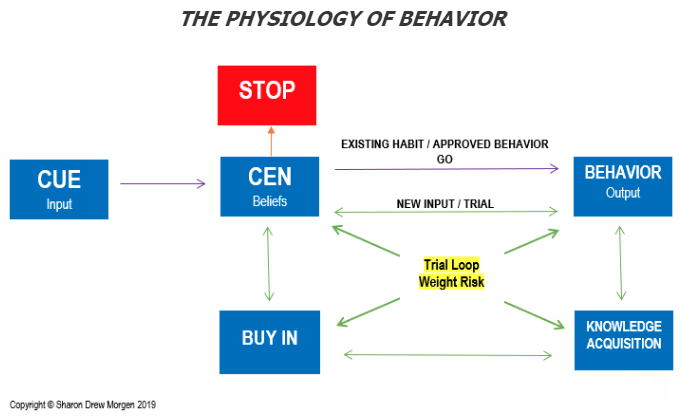 Let me explain a bit of the chart, and it’s a bit geeky, so hang in.

When your wish (I want to be better organized) enters in the CUE it gets translated into an electro-chemical signal that then gets sent to the CEN which matches circuits that are ‘close-enough’, and behaviors emerge. If you want to do something different than you’ve done before, the Trial Loop (in chart) is instigated (I developed this Trial Loop) to facilitate agreement, buy-in, congruency and risk during a learning process. Watch as I discuss the process in my sample one hour video.

I’m writing a new book on this, and now offer a 5-part video training program available to teach leaders, change makers, coaches to help their clients change. Let me know if you’d like a conversation to learn if the program could help you stop smoking, lose weight, start your exercise regimen, or any other new behaviors you’d like to make habits. [email protected]. And watch my sample video, or see the program syllabus, here.

This is a new-type of program, in that it asks you to actually work hard on making your unconscious conscious. It’s not behavior-change based, or information-based, but brain change-based and takes more concentration. It produces permanent change via wholly new circuits. If you’re interested in real change, take a look. And I’m here for questions.

The HOW of Change™: the physiology of transformation

How is Technology Transforming the Future of Retail eCommerce Businesses?