It was a good Friday for both employees and customers of TD Bank. [TD stands for Toronto Dominion] Last month over 20,000 TD employees across Canada distributed green envelopes containing a $20 bill to every customer in more than 1,100 TD branches. In addition, thousands of others using TD phone and online banking service were informed that they would receive a deposit directly into their accounts. A total of 30,000 customers were surprised and delighted.

A few more customers were in store (or in branch) for a much bigger surprise. TD placed a special ATM in their respective branches. According to the Examiner, a TD spokesperson stated “over a dozen customers across Canada received a special customer thanking experience at their local branch through the Automated Thanking Machine (TM), such as trips, experiences, RESP contributions etc.” These experiences were captured in this heartwarming YouTube video entitled,  Sometimes you just want to say thank you #TDThanksYou

Since its release, the video has received over 10 million views. It has also went viral on Facebook. This post by IJReview has been shared over 200,000 times.

“A thank you can change someone’s day, so that’s why we have been surprising our customers across Canada, to say ‘TD Thanks You,” said Tim Hockey, President and CEO, TD Canada Trust. “We know Canadians have a lot of choice when it comes to where they bank, and we wanted to say that we appreciate that they continue to choose TD.” 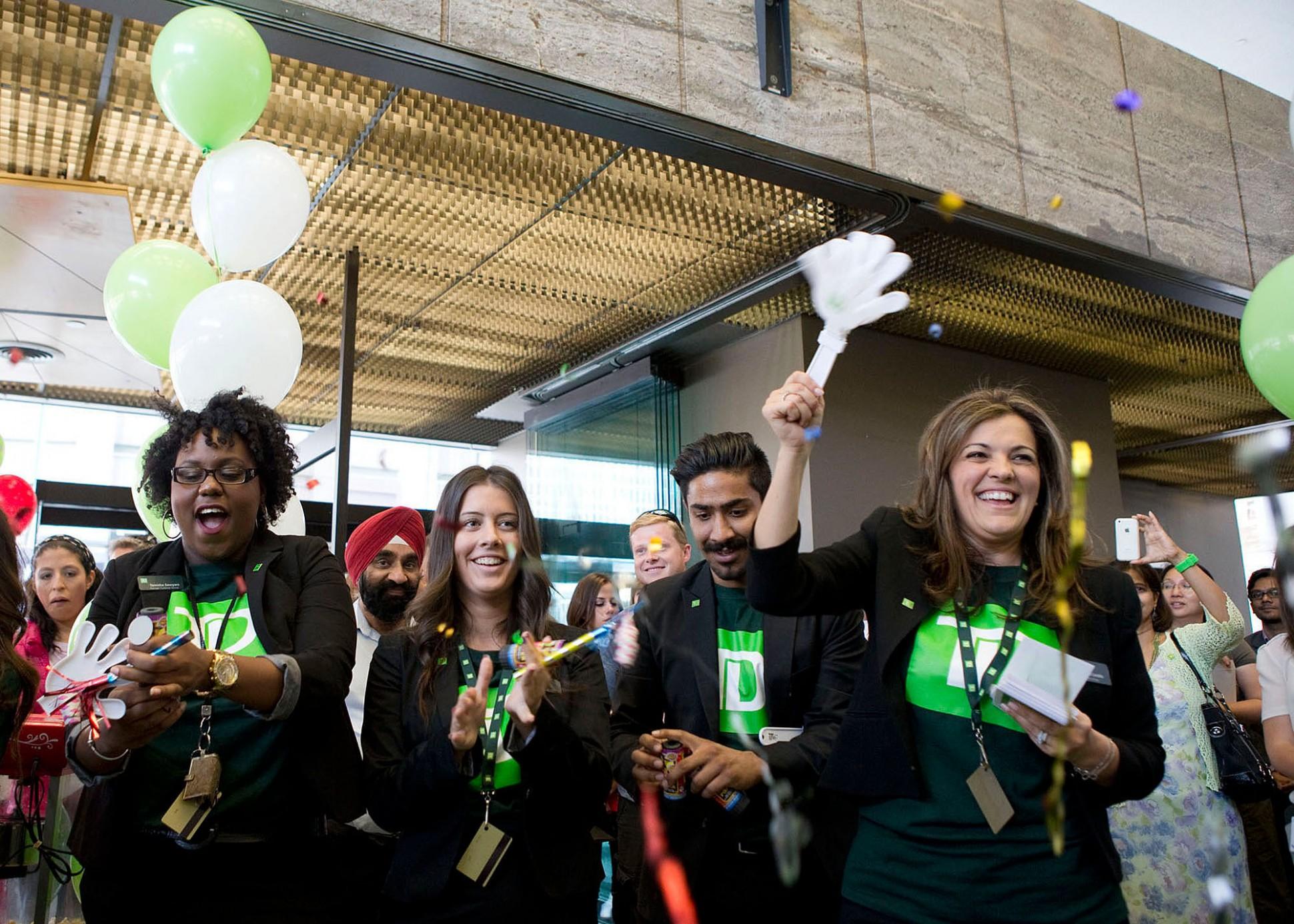 The “little extra” is the norm at TD Bank. TD is the sixth largest bank in North America. In addition to providing great service, TD Bank differentiates itself through convenience.

They are a Purple Goldfish Hall of Famer. Jim Donofrio contributed to the Project and pointed out this school of purple goldfish from TD:

- Green pens with the TD Bank logo. They can be found everywhere… from a local restaurant to a large scale charity event.

- Penny Arcade. The first thing you see when you walk through the door.  Change your pennies into dollars for free.

- No barriers between you and the tellers within the bank. This promotes a friendly atmosphere.

- Green lollipops for the kids and dog biscuits for Rover. Everyone leaves with a smile on their face and a wagging tail.

There is tremendous power in the simple act of saying thank you and gifting. Demonstrating warmth and competence by doing the little extra pays dividends. Cited in the book, What’s Your Purple Goldfish, a study published in the International Journal of Marketing Studies revealed that greeting and gifting before purchase could increase consumer spending by 46%. Here is a summary of the findings by authors H.H. Friedman and Ahmed Rahman:

An experiment was conducted in a restaurant to determine the effects of a small gift upon entry and greeting customers with a thank you for their patronage. Two types of gifts were used: a cup of yogurt and an inexpensive key chain. The authors found that providing a gift upon entry into a store had an impact on how much was spent, on the performance rating, and on how strongly the establishment would be recommended. This study did not find any differences between gifts: a gift of a cup of yogurt had the same impact as a key chain. The difference in amount spent between the group that was not greeted or given a gift and the group that was greeted and given a cup of yogurt was 46.4%, a considerable amount. The authors conclude that retailers should greet customers who enter their stores and, if possible, provide a small gift.

Are you leveraging the power of the gift? Like TD Bank, perhaps its time to say “thank you.”

Today’s Lagniappe (a little something extra added for good measure) – Here is Tim Hockey and a bunch of other TD Bankers participating in the Ice Bucket Challenge. Nice job laying down the gauntlet for the other Canadian banks: