“I’m giving my two weeks’ notice today”, the young women with the blue hair told me as she struggled to assign me a storage locker. A long line of irritated customers formed behind me and was growing longer by the minute.

I could sense her helplessness and frustration too. She couldn’t have been more than 25 and obviously had no idea what she was doing. Yet, she worked in a beautiful new well-stocked facility with plenty of equipment, parking, and yes…storage lockers. If only she could figure out how to rent them. I tried to help her as I was a bit more familiar than she with the system at this point having struggle through with another associate the day before.

Was she to blame for this CX mishap? No. But you can be assured she got the brunt of the blame for all the problems the storage facility parent company created for her.

As my friend and colleague Bassam Salem likes to say (and I will paraphrase), it’s always the hapless call center representative that is scape-goated for corporations’ failings. The people who are paid the least and are usually the least to blame but are almost always the targets.

If we peel it back a bit we can see that in many circumstances it is not the employee, it is the communication, technology, policies, procedures, educational, and selection practice of the company that is at fault. Here are a few of the most frequent culprits. Let’s start with Ms. Purple Hair.

When I asked the representative if she had any training on the system she was using she responded, not surprisingly, that she had not. In fact, having been to the storage facility several times it was apparent no employees had training. Not even the general manager. In fact, they could not articulate basic facts about the facility such as what an ADA locker was or if the facility was temperature control. This was not Billy Bob’s Lockerworld mind you, but a nationally recognized chain in a brand-new facility in which they must have invested millions of dollars.

As David Crosby once said, “teach your children well.” You should do the same for your employees. Many times, training is seen as a “nice to have”, but without it becomes a very apparent weak link the in the chain. Make sure people know what they are doing before you send them into the wild, lest they get eaten by the wolves.

Ms. Purple Hair was there alone on a busy Saturday morning. Her only lifeline; her manager who was not there that day but at home sick. This is not an isolated incident. I have been to this facility several times; they never have more than 2 people there.

Look for peaks and valleys in your customer volume and schedule accordingly. There is very good scheduling software that integrates demand planning into staff schedules. This can attenuate bulges in demand. Also having self-help kiosks for routine procedures can help mitigate peak demand times. Both grocery stores and now quick serve restaurants make great use of self-help kiosks for routine requests and questions. For example, McDonald’s recently announced they are spending over $6 billion on upgrades including kiosks and mobile ordering.

“So, you can’t tell me what my credit is, but can tell there is a $200 change fee when I do rebook my flight sometime in the future?”

“That’s correct sir”, said the cool as ice phone representative. I imagined her inspecting her fingernails for flaws as she spoke in a very matter-of-fact-this-is-completely-normal kind of way about this ridiculous policy.

In this case, I had just canceled a flight and was making an inquiry about the credit left due to my cancellation. They were pretty clear about how much the whole thing cost, but when you cancel it is apparently a mystery even to the Airline. This is akin of buying a bag of groceries and returning the canned green beans but the grocer telling you that you can only know your refund amount once you buy something else. Ridiculous. I’m sure there was a good reason for this, but it was beyond the rep’s knowledge or care.

Have policies that are common sense. If they don’t at face value, have a good explanation of why. People are understanding if there are reasons beyond “I don’t know.”

I was in a long line at the rental counter in Memphis being reminded of the virtues of Uber and Lyft. Ride-hailing was not an option in this case, as I had a long drive and needed a rental. The rental company sent me to a remote location that apparently had vehicles but was 5 minutes Uber/Taxi drive away.

As I waited in line I had to listen to the desk agent grill a young lady on her creditworthiness. He was asking highly personal information in front of a room of people such as where she worked, etc. in order for her to get a vehicle. He non-maliciously but ignorantly humiliating her. She answered in whispers until the interrogation was over and was handed the keys to the Chevy Cruze.

I am sure this desk agent did not take glee in this interrogation. I bet he dreaded it. I am sure if he wasn’t required to do it he wouldn’t. This is an example of an offensive policy.

Revisit your policies and ask yourself…to coin Jeanne Bliss, what I do that to my mother? If you must get to private or potentially embarrassing information, how about an application form? Or better yet a private area? There are small fixes which can improve the situation immensely for everyone.

In the same rental counter, I was told I had to provide proof of insurance. I was a bit shocked. I did not have to produce proof of insurance in Mallorca let alone Memphis. People don’t normally carry that around. I let the poor desk agent have it. He explained it was a local policy for this store and even though they were part of a large network, this particular store was considered “high risk.” I struggled to recall who my insurance company was and eventually got ahold of my insurance agent who chatted with desk agent who provided the requisite information. Again, not the employee’s’ issue. This is a company policy (or at least local requirement). It was a requirement I never ran into after renting from this company for over 20 years.

Humans hate inconsistency. If exceptions in your processes are necessary, make sure they are clearly communicated in advance and provide an explanation why. Knowing what to expect is critical. 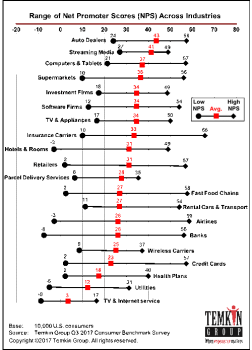 In this case, I dealt with two separate representatives. The first one was apparently to pitch me on stuff I really didn’t need and the second one to make sure the first one didn’t swindle me. I then had 2 installers come out to my whom at different times with different versions of what could and could not be done. The last installer told me the package I bought really didn’t do what it purported to do, so I downgraded.

Through the interaction there was a barrage of packages and options and contracts that would perplex Alan Greenspan. Moreover, they couldn’t tell me the total price of any option until after I had selected it. This resulted in a 20 minutes conversation in which both the customer (me) and the representative on the phone were extremely frustrated.

Packages and options may seem like a great idea in the marketing department in headquarters, but people just essentially want to find the best solution for their needs. The folks I talked to at the cable company were well trained on the products but had the inability to make a recommendation for my needs. They were also hamstrung by the complexity of the offering (which should not be that complex). Keep your product offering simple and focused on the customer need.

It’s Not the People

Sure, you are going to find a rude waiter or discourteous call representative from time to time. They have hard jobs. I work as a grocery clerk once upon a time and would be lying if I didn’t get a little cranky from time to time.

What makes the front-line job so much harder is the sometimes well-meaning but nonsensical things companies do that makes their jobs so much more difficult. Hire your employee carefully, train them on their job, and give them the tools and autonomy to do things right. When you create policies go out and talk with your employees to see how it will work in the field. This will make for happier and more loyal employees and customers.

Stumped for New Ideas? This is What is Stopping You

Taking a Step Towards Emotional Branding in 2022 & Beyond