It’s inevitable that at some point in your company’s lifetime, you will make a mistake and an unhappy customer will be born. What’s important to note is how critical a moment that is for both customer and company. The way you handle it can be the difference between creating a loyal customer and an ex-customer. And, what separates the top companies from the rest is how they respond to these mistakes.

Own your mistake. I can’t stress enough how important it is to take ownership. There are few things more off-putting, and to be frank–irritating–than a person or company who can’t admit wrongdoing. This may seem like a minor detail, but it makes a big difference. The quickest way to get back on the path of delighting your customer is to admit if you made a mistake. Customer happiness should be a priority and a swift apology shows your customers someone is actually listening, acknowledging and validating their concerns.

This past spring a Houlihan’s restaurant made waves when a manager turned away a veteran and his service dog, stating dogs were not allowed. The veteran voiced his complaint and, as news so often does these days, the story went viral, quickly coming to the attention of Houlihan’s VP of operations. You can read her very swift and personal apology below (note, she also sent a letter to the veteran): 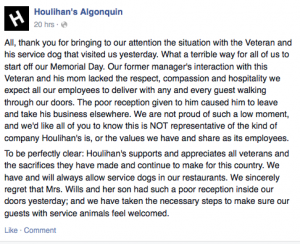 Houlihan’s apology appeared truly genuine because they didn’t default to the boilerplate, PR agency-inspired, lawyer-approved line of “We’re sorry for any inconvenience this may have caused” or “We apologize if anyone was offended”. It’s a route many companies choose to take but it comes off as hollow and insincere, often causing more damage than repair. People don’t like being talked down to and an insincere apology appears to minimize the issue, even going so far as to feel condescending. Even more upsetting, these types of remarks allow the company to appear as if they are apologizing but without taking any of the responsibility. It’s an easy way out that actually ends up deflecting the blame. They’re sorry that someone felt hurt, jilted or inconvenienced, but not because of anything they actually did. Apologize sincerely, with dignity and grace.

Speedy action is also so important (Houlihan’s addressed the situation within 24 hours). A long delay makes room for your audience to wonder if you’re apologizing because you actually feel bad or because your back is up against the wall and you have no choice. By being accountable and providing a truly personal apology, the restaurant won back the veteran, his family and many other miffed customers.

This is a golden opportunity to gain some really candid feedback that you might not have captured otherwise. You may remember this past summer when Apple announced their long-awaited music streaming service. There was a lot of fanfare around the announcement but things took a quick turn when it was made public that during new customers’ free trials, artists would not be paid. 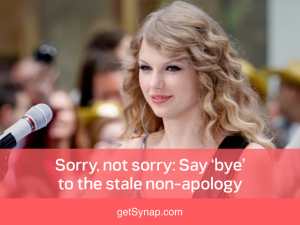 The resulting immediate backlash was sounded most loudly by grammy-winning, instagram-loving, Taylor Swift. She penned an open letter stating her frustration on behalf of writers, producers and artists over not receiving compensation for the three-month trial periods. Barely 24 hours passed before Eddy Cue (SVP of Internet Software and Services at Apple) publicly responded. He ensured Taylor Swift knew her frustrations were being heard and took the extra measure of adjusting Apple’s new policy.

Not long after, Swift and co. kissed and made up with Apple, appreciative of the policy change. This is definitely an extreme case involving two very high-profile parties, but it’s a lesson we can all learn from.

Delivering a sincere apology can seem daunting, especially because most people tend to shy away from confrontation. However, it’s incredibly easy if you can remember the following three points:

If you have a misstep, take responsibility and don’t deflect back on to the customer. This can be a tough step but it’s truly important. Take ownership and make a direct apology.

Offer something to make up for the mistake. It could be as simple as a handwritten apology or something bigger like a replacement product, swag or a discount on a future purchase – whatever makes the most sense in regard to your company and the situation.

Listen to the customer and adjust your processes to avoid making the same mistake in the future. And don’t forget to communicate the changes with your customer. It’s important they know you’ve taken to heart their feedback and that you’re making an effort to not repeat the same mistake.

At Synap we’re big believers in this practice but we recognize that there are times when the customer is, in fact, not always correct. In cases like that, you have to do what you feel is right and it’s a balance between maintaining the integrity of your company and/or product and appeasing your customers.

On the flip side, when you have an “oops” moment, fess up. Own it, apologize and tweak your actions if necessary. No company is too big and important (or too small, for that matter) to dodge an apology.

*This post was originally published on Synap Software Labs’ blog.