Most of you will know that I’m a huge fan of Disney, one of the most cx oriented companies of our times. And so you will understand that I was absolutely thrilled to interview Duncan Wardle who used to be the Head of Innovation and Creativity at Disney for many years on my weekly podcast show. We talked about a great many things related to innovation and customer experience (listen here), but I wanted to share my 6 favorite insights from the talk here as well. Enjoy! 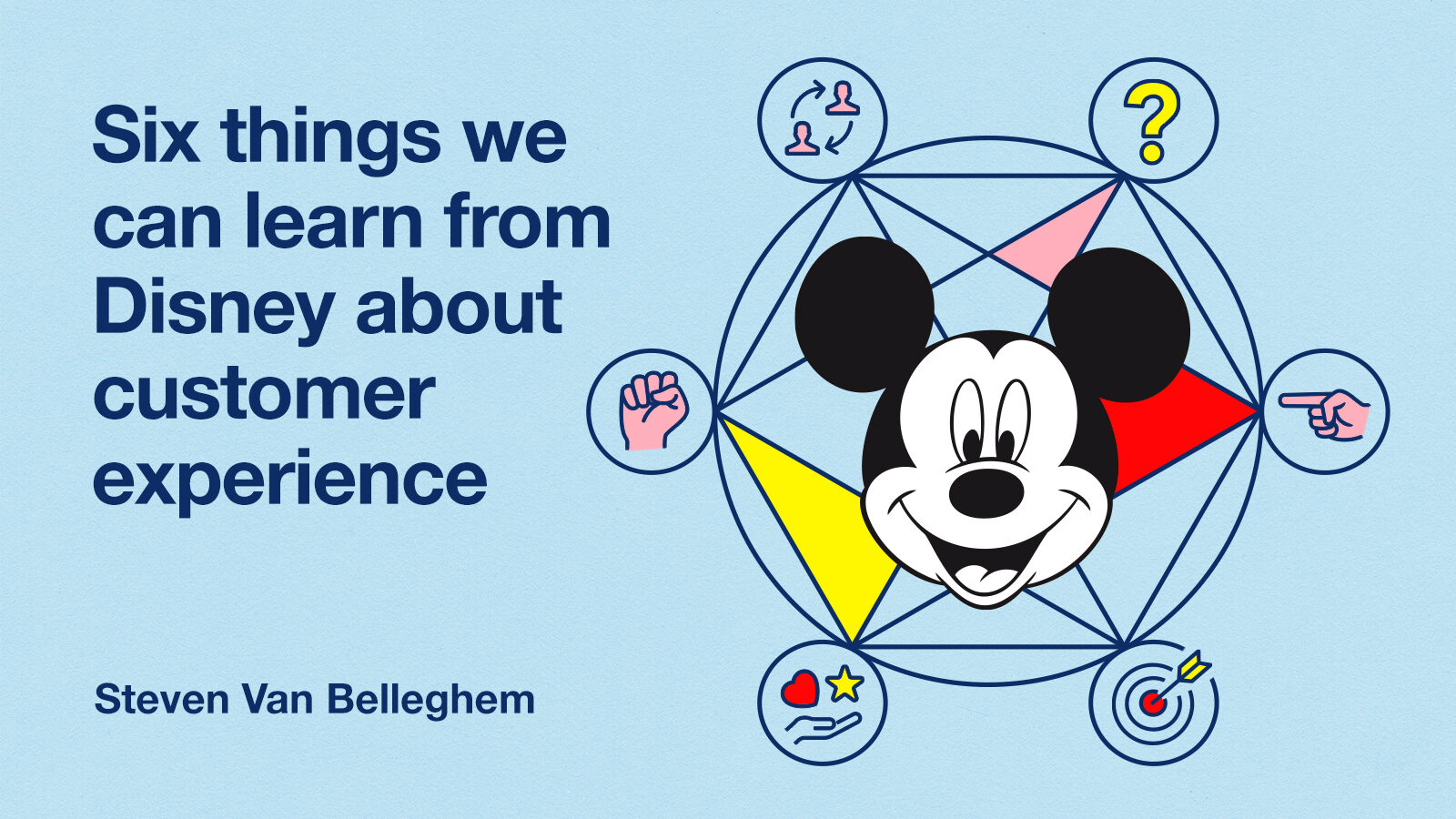 Duncan is a big believer in asking series of questions: just like when we were young and we asked “why” and then our parents explained and we asked another “why”, which could last for a very long time. “Insights that are useful for customer-oriented innovation tend to only appear after 4 or 5 consecutive whys”, he explained.

According to him, data often only goes one or two whys deep and therefore can deliver faulty insights. “If you run a survey asking people “why do you go to Disney on holiday?”, most people might tick the box “I go for the new rides and new attractions”. So you could decide to spend $240 million on a capital investment strategy. But if you ‘act like a child’ and keep digging deeper with multiple whys, you might get an answer like “It reminds me of the times I used to go with my mom and now I take my daughter too”. And so you would uncover something that has nothing to do with capital investment strategy whatsoever and everything to do with a communication campaign focussed on nostalgia. Especially in these times where AI will strip away between 20 and 30% of the jobs in the Western world, it’s crucial that we keep our childlike curiosity and creativity, which is something that the machines won’t be able to do in a very long time.”

For a very similar reason, Duncan is very big on trusting his guts. “There’s no doubt that big data is getting better and better every day”, he explained. But if you’re only looking at your big data, you’re also only looking where your competition is looking. And if you’re only looking where your competition is looking, how will you find that one insight that will allow you to innovate in ways that somebody else can’t?

That’s exactly why he would give anyone the advice to “stop being so arrogant and go and live with your customers for a day”. “Executives are often so far removed from their consumers that they don’t know what’s important to them. I would advise to make it mandatory for everybody in your organization who’s not in direct contact with the consumer to go spend a day per year in their living room. It will ground you in becoming a consumer centric organization.”

It’s also why he’s not big on organizing focus groups because of their forced and “false” context which does not stimulate honest answers – “they will always tell you what they think you want to hear” – and interesting insights. “It’s a lot better to talk to them in the relaxed environment of their own home, especially if they are with more than two because that triggers what I call the ‘self-regulating honesty policy’: the husband might for instance answer in a certain ‘manly’ way, while the wife would add something a lot more closer to the truth like “Oh no, but you said it made you feel like a little boy again”.

We also talked about the importance of purpose over product and the fact that “if you build it they will come” is definitely a bad approach. He gave the example of his work with the world’s largest manufacturer of tools like hammers, chisels, and saws. Before his talk, he spent some time at their store and saw the lack of engagement of Millennials and Gen Z who had basically never heard of their product.

So Duncan told the tool manufacturer “They’re not talking about prices but about building or remodelling their dream bathroom, dream kitchen or dream house. If you choose to create that purpose, you could become the brand that helps people build their dreams”. But the executives persisted: “We make tools, we’re really good at it and we’re going to expand to Mexico where they have a growing middle class who will now have the money to buy them.” Duncan told them he really doubted that because of for instance the rise of 3D-printing and the fact that we are now able to print houses, chairs, tables and all kinds of things for which we will then no longer need tools. “If they don’t act according to their purpose, rather than according to their products, they will be gone in 10 years.”

One of the approaches that made Disney so wildly successful in all of their different endeavours, is what Walt Disney called the “Experience before retail” strategy. And you can see it in every little detail of their amusement parks. It’s one of the many reasons why I love them so much.

“From the first days onwards, Walt told everyone that “we will not have any customers in our park but guests””, Duncan explained. “Think about the difference between how you feel when you are treated as a customer or when you’re treated as a guest, right? That can have a huge impact. Walt also said that “we will not have any employees but cast members that wear a costume, not a uniform. That’s a huge difference for their engagement and behaviour, too. And with that simple re-expression, he redefined a level of hospitality and experience that has never been replicated or duplicated.”

Just like me, Duncan believes that lack of time or resources is a terrible excuse for lack of customer innovation. I always tell my audiences that they just have to work in small, affordable and manageable steps, which will amount to a lot if you count them at the end of the year. Duncan put it like this: “necessity is the mother of invention and creativity is almost certainly the father. The people who are in fact, the most innovative and most creative are the people with the least amounts of money.”

So he told me about the Derby slum in Mumbai where he and his team had to create lighting without any electricity or budget. And the solution they came up with was to use no-label (leaving the label would have diminished the light quality) water filled plastic bottles – gifted by Evian – in the ceiling that refracted a huge amount of light inside the very dark huts during daylight hours. Lack of resources is always a bad excuse for not trying to change things for the better.

Disney has always been one of my top favourite companies because of their fantastic customer experience. So I really hope that you’ll be inspired as much by these learnings as I am, every time I go to visit them.

Make hay while the sun shines!

Is The Future Of Selling PLG?

The New Hybrid Field Service Model: Does Visual Assistance Have A Part To...

How to walk a Fresh way towards CX and EX