Here are a few nuggets from the webinar that I wanted to share — and hopefully stimulate some CX planning for 2017.

I think most everyone would agree that making a emotional connection with a customer is a good thing — assuming it’s a positive emotion of course.

According to Forrester, emotionally engaged customers are three times more likely to repurchase, less price sensitive, less likely to shop around. And Forrester finds that:

“Companies that aim for emotional connection beat their competitors by 26% in gross margin and 85% in sales growth, with customers feeling more engaged and appreciated.”

This is the so-called “loyalty effect” that has been researched by Reichheld and many others. The key question is: which emotions matter?

Merely being “satisfied” has been dissed in recent years. Yet the study found that it was the most common emotion selected by consumers when asked to describe how they felt after a “great customer experience.” Although there were some regional differences, nearly four of ten consumers selected this emotion.

The only other emotions to crack double digits were Safe/reassured, Important, and Relaxed/at ease. 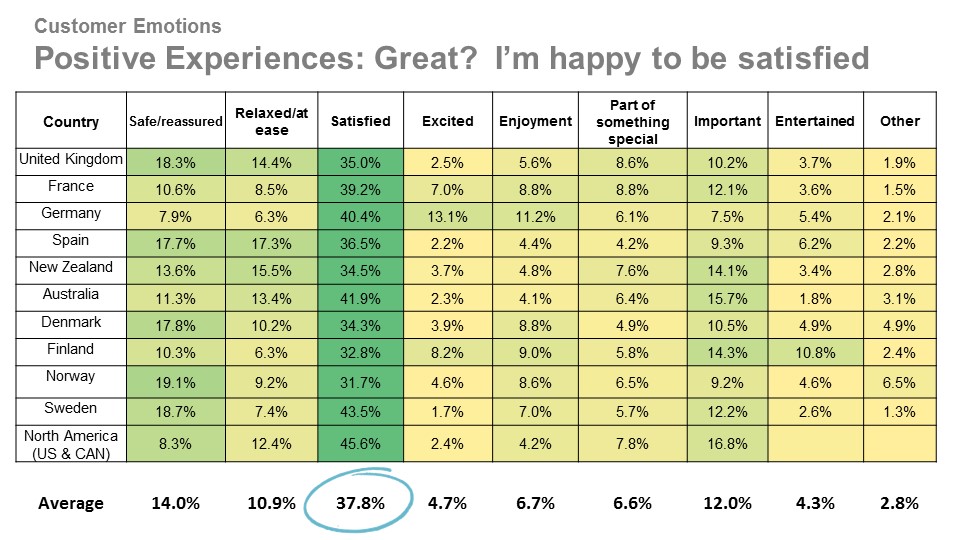 You may be wondering how did InMoment arrive at these choices. According to Wilkie, InMoment used predictive loyalty models and InMoment’s text analytics to derive positive and negative emotions from open-end feedback in surveys.

The Four Horsemen of the CX Apocalypse

Unfortunately, negative emotions have a much higher impact on behavior and cognition than positive — sometimes called the “negativity bias.”

Howard Lax noted in a recent post how important it is to stamp out the sources of negative emotion. He sums up: “Negative experiences and emotional disappointments tend to be more enduring than positive, emotionally pleasing experiences.”

The top four negative emotions, represented in roughly equal proportions of around 20% each, were Frustrated, Disappointed, Disrespected, and Angry. There were some interesting regional differences, however. American and Canadian consumers were more likely to feel frustrated and disrespected, while Germans got angry more frequently. 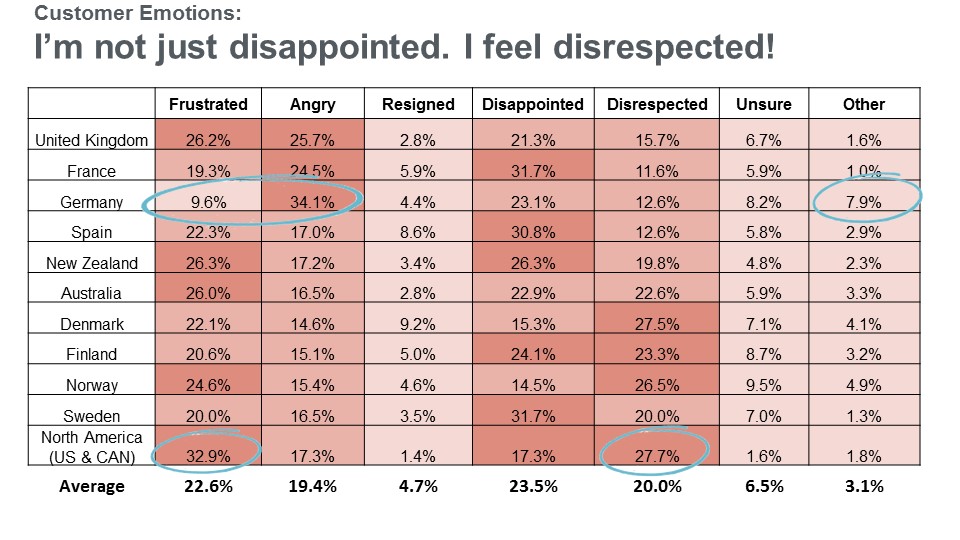 For positive emotions, brands rated “satisfied” the top emotion but at a significantly lower percentage — about 20 points lower than consumers. That gap was distributed over “part of something special,” “important,” and “safe/resassured.” Essentially, brands tend to underestimate the importance of just getting the basics right.

On the negative side, brands generally underestimated the percentage of the more intense emotions “angry” and “disrespected” by roughly 10 points vs. consumers. Wilkie found this the most surprising finding:

I was surprised to see that Brands significantly underestimate the deep, personal affect they have on the emotional well-being of consumers. This is particularly prevalent when a negative experience takes place. Brands took an almost dismissive position, suggesting they expect consumers to simply feel disappointed or unsure. In contrast, consumers were passionate in their response, selecting the deeply personal emotions of anger and disrespect in disproportionately high numbers versus Brand ratings.The gap in emotional alignment associated with negative experiences within the consumer/brand relationship is quite alarming.

So, Just Do the Basics?

In my view, all the above supports a CX strategy of 1) get the fundamentals right and 2) when you make mistakes, fix them quickly and minimize the negative effects. Initiatives towards reducing friction and defects all fit this strategy well.

However, I don’t think that only focusing on the basics and creating merely “satisfied” customers is a route to differentiation. My research has found that industry leaders do in fact focus more on “delight” (exceeding expectations) than laggard companies.

Also, keep in mind that while about four out of ten consumers say that “satisfied” is how they feel after a great customer experience, six out of ten chose other more intense emotions.

To me, it suggests that as you think about your CX plans for 2017, you should try to answer these questions:

Disclosure: InMoment sponsored the webinar referenced in this post. However, this post is part of my independent industry coverage and is not part of any sponsorship agreement. No endorsement is to be implied towards InMoment or any other companies mentioned.