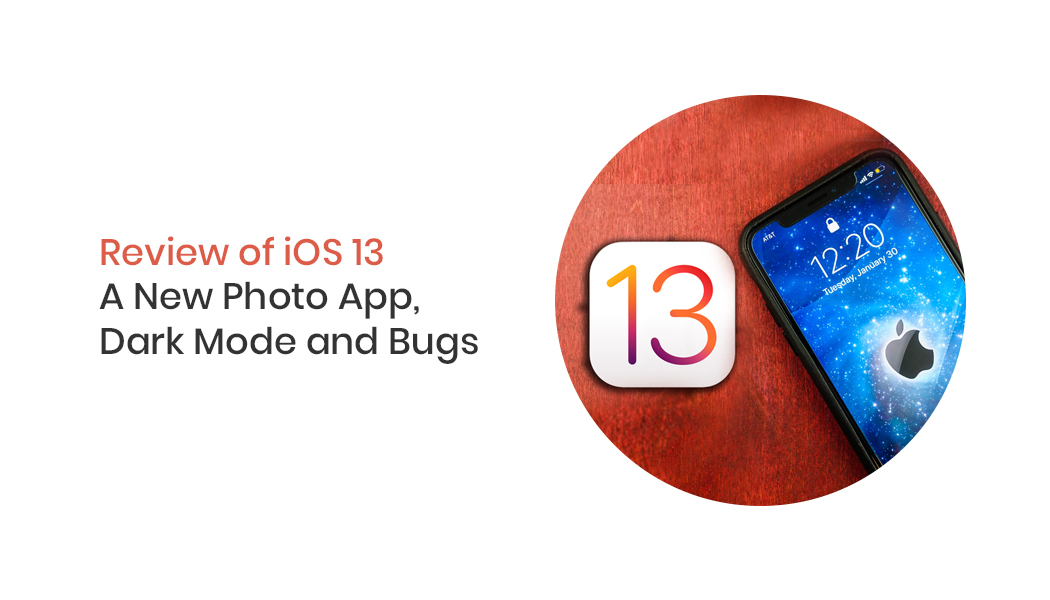 Apple’s release of iOS 13 on the 19 September came with many applauses from the phone users, little did they know that there were bugs that needed to be fixed. Like many other iOS releases, the phone users are much concerned about the new features and it only comes to their surprise that what seems like a perfect new version of a previous operating system begins to show its unresolved problems. Apple’s iPhone software iOS 13 brought the Dark Mode and the new Phone app among other exciting features, nonetheless, it also brought in bugs. Developing iOS apps is an intense process and requires a dedicated iOS developers team. If you have a project that involves the development of an iOS app, then you want to make sure that you are dealing with trusted developers.

Users may want to hear much about the Dark Mode that features in the iOS 13, however, there are also other things that they need to know. The iOS 13 didn’t live up to the quality of standards Apple wanted and that’s why it was inevitable to have an update soon. In fact, an update happened in less than a week. iOS 13 was released on September 19 and the first update was released a few days later on September 24. So, the performance of iOS 13 wasn’t as expected on launch and that’s why Apple had to schedule for an update so soon after the release of the new iOS.

The Apple’s Dark Mode feature on iOS 13 was perhaps the biggest feature. Of the many dark modes we have seen, the Apple’s seems to be among the best ones. The background appears in true black and not some dark gray shade. The background also looks great when viewed on OLED panels with the iPhone X and XS devices.

Dark Mode makes the interface of iPhone less glaring when you view it in a low-light environment. For example, App developers are able to integrate Dark Mode within their apps to ensure that the phone users have a consistent look.

Although Dark Mode may be the flashiest addition to Apple’s iOS 13, the new Photo apps does also come in smartly. There were two major changes in the Photo app that Apple made. First, the overhaul designed was changed making it easy for users to be able to flip through photos they have saved for many years. The developers also added great number of editing tools for videos and pictures, which could eliminate the need to use third party apps.

A simple change on the Photo app is the design, which instead of displaying increasingly out-zoomed views of user photos for year, month, and day. Apple has switched to a different useful view whereby the best shots of the user within a particular period are shown. The user is seeing less information within a given time, however, that information they see is more useful compared to the tiny thumbnails they would see. Besides, navigating the Photo app appears to be sequential.

The editing tools of the Photo app are another great addition. If you have used Istagram photo editing tools, you will find the iOS Photo editing is similar. On tapping to edit some picture, you have a list of adjustments including picture highlights, contrast, shadows, exposure, black point, and others. During the editing, a user is able to compare the adjusted photo version to the original piece at any point of the process. The user needs tap on image preview and they can see the changes.

In essence, the Camera and Photos apps have seen serious changes like a new look of the Photo tab together with many editing upgrades.

Developers working on iOS app projects need to ensure proper protyping and testing is conducted so that flaws are established. Businesses that work closely with reputable iOS development services are able to get quality products.

Although Apple Maps cannot compare to Google Maps, it is impressive to see that Apple is doing something about the Maps feature on its iOS. There may be nothing about Apple Maps that could make you switch from Google Maps, however, considering that Apple Maps is the default mapping app you find on iOS, Apple needs to work hard to improve the standards to meet those of Google Maps.

So, what are the additions you see with the Apple Maps on iOS 13? Well, there is a feature that looks like Google Street View, which allows the user to look around locations in real world. However, this feature doesn’t come near to be as comprehensive as those of the Google Maps. There are also features to help you save your favorite locations as well as real-time transit information.

The Apple Maps feature has a new street-level appearance in addition to in-depth mapping among selected cities.

When you hire iOS developers, you want to ensure that they have the experience to bring out a tangible app product. They need to introduce features into the app that will help the users in different ways. If there are flaws in the development process, they are examined and the bugs fixed in time.

Since iOS 7 was rolled down, the iOS 13 version is the one that has given Reminders a considerable update. There is a new design, a new sorting option feature, as well as a smart toolbar powered by Siri that is used to enter reminders allowing users to find it easy to attach locations, dates, and photos to those reminders.

Apple had scheduled the release of iOS 13.1 update however there was an exploit that compelled Apple to release the update earlier. It released it on September 24 because the exploit could allow a person to gain access to a user’s Contacts apps even if their iPhone was locked. The iOS 13.1 update came with other new features and fixing of more bugs.

The iOS 13.1 update featured the AirDrop feature, one of the best secrets of Apple. The U1 chip found in latest iPhones proves to have gotten better. It provides iPhone spatial awareness. If a user needs to AirDrop something to another person in locations where there are many other iPhones, you could see a line of the unfamiliar phone names appearing before you see the exact one that you wanted. With the update, by just pointing the phone at another one having the U1 chip, it would give priority to that phone. So you don’t have to see the other phones first.

Another new addition in iOS 13.1 is the Shortcuts feature where the Gallery within Shortcuts is now able to suggest automations designed to align to your personal routine. The Maps feature has also seen more improvement, for instance, when a user is enroute, he or she can send their ETA to other users.

The Battery Health has also seen bug fixing to ensure that unexpected shutdown is not experienced at it used to happen. There is even an option in which you can disable shutdown. In addition, the update makes other improvements and bug fixes which include addition of a link within the Me tab found in Find My to allow guests to sign in and be able to locate a missing phone. There is also a notification if a display on a phone cannot be verified as a genuine new display from Apple in iPhone 11 series.

Issues that prevented Memoji from tracking facial expressions correctly in Messages are also addressed. Problems of photos not displaying in Messages details view was also rectified. An issue within Notes in which Exchange notes could not show up within search results was also resolved. The problem of birthday events appearing multiple times was also resolved in Calendar.

Dedicated iOS developers can help you if you encounter bugs in your iOS app development project. The developers can also help build your app product from scratch and ensure its of high quality.