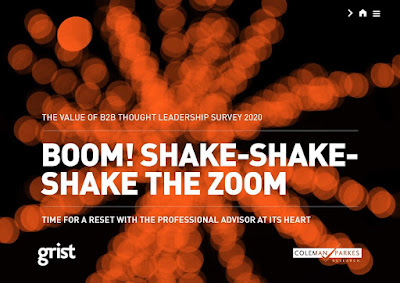 Grist, a B2B thought leadership and content marketing agency based in London, recently published the results of its Value of Thought Leadership Survey 2020 (the "2020 Survey"). The 2020 Survey was conducted in October of last year and produced responses from 525 senior executives at global organizations operating in ten industry sectors. Respondents were located in eleven countries.

The 2020 Survey is the third installment of Grist's research regarding B2B thought leadership. The firm also conducted surveys in 2018 (the "2018 Survey") and 2016 (the "2016 Survey"). This type of research can be particularly useful because it allows us to see how survey responses have or haven't changed over an extended period of time.

The Grist research echoes the findings of many other studies regarding the importance of thought leadership in the B2B marketing mix. In the 2020 Survey, 91% of the respondents said thought leadership is either critical (40%) or important (51%) to their decision making. The comparable percentage in the 2018 Survey was even higher - 99%.

The 2020 Survey also revealed that many senior executives had increased their consumption of thought leadership content since the beginning of the COVID-19 pandemic. Nearly half (45%) of the respondents reported consuming a little more (26%) or a lot more (19%) thought leadership content. Twenty-eight percent of the respondents reported consuming the same amount.

In all three surveys, Grist asked participants why they consume thought leadership content. The following table shows the three reasons most frequently cited by respondents in each of the three surveys.

As the table shows, the most popular reasons for consuming thought leadership have been relatively consistent in all three surveys. One notable development is that thought leadership content is now playing a larger role in the process of vetting potential vendors. In the 2020 Survey, 60% of the respondents said they use thought leadership to evaluate the expertise of potential suppliers. That was up from only 36% in the 2016 Survey.

In all three surveys, Grist also asked participants what qualities make thought leadership content valuable and useful. The following table shows the qualities most frequently selected by respondents in each of the three surveys.

As this table reveals, the qualities that senior executives look for in thought leadership content have also been relatively consistent since 2016. Fresh thinking was a top three selection in all three surveys, and forward-thinking was a top three choice in the 2020 Survey and the 2016 Survey. In addition, the quality called evidence-led in the 2016 Survey was defined as "containing robust data." So robust data was a highly-rated quality in two of the three surveys.

One type of thought leadership content that significantly increased in importance between 2018 and 2020 is content that is action-oriented. In the 2020 Survey, 32% of the respondents said that being action-oriented ("helping make more informed decisions") is a valuable quality of thought leadership content. That was up from only 18% in the 2018 Survey.

The "Lifespan" of Thought Leadership

In the 2020 Survey, Grist asked senior executives what management time frame they were primarily concerned about. Twenty-nine percent of the respondents said the "next 3 months," and almost half (49%) said the "next 3-12 months." These responses should not be surprising.

When the survey was fielded in October of last year, the COVID-19 pandemic was still foremost in the minds of most business leaders. New cases were rising in many countries, and it wasn't clear when safe and effective vaccines would become available. Under these circumstances, it's not surprising that senior executives were focused primarily on the immediate and near-term future.

My view is that the "time frame" issue will have less impact on thought leadership than the authors of the Grist report seem to believe. In my experience, most good thought leadership content addresses major issues that are likely to have a significant impact over an intermediate time frame, say the next 1-2  years. In addition, as the COVID-19 pandemic subsides and business conditions begin to normalize, senior business leaders are likely to expand their management time horizons and return to somewhat longer-term thinking.