Story: At the World Innovation Forum in June, Ray Kurzweil, inventor of the first CCD scanner and author of The Singularity is Near, 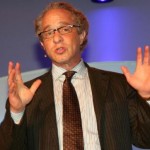 talked about the ease of predicting the future by spotting and extrapolating exponential trends. Although Gordon Moore uttered his famous Law around 1970, Kurzweil found that the exponential trends in computation and data transmission predate Moore’s Law by many decades. Moore spoke of the rate of evolution of semiconductor chips, but the trend started in earlier generations of computing and communications technologies including mechanical relays, vacuum tubes, and the first transistorized devices. Even wars and depressions failed to halt the exponential progress in performance. Trends in miniaturization and mass production meant information technologies improved at a steady pace across the decades.

Kurzweil noted that many people don’t understand the basic math of exponential trends. When the Human Genome project had sequenced only 1% of the genome after seven years of costly labor, many cited the lack of progress as evidence that the project was doomed. Yet the sequencing project was riding an exponential trend in the performance DNA sequencing methods. Instead of taking another seven years to sequence a second 1%, they reached it after only one year. Then they reached 4% in about another year, then 8%, 16%, and so on. It took about as much time to sequence the last 99% as it took to sequence the first 1%. That’s the nature of exponential trends — they seem to start glacially slowly but finish lightening fast.

This trend continues unabated. Along with exponential performance improvement comes an exponential drop in cost and an exponential rise in use. What once took a billion dollars per genome is now costing a few thousand dollars per genome. Soon, scientists expect to have one million human genomes sequenced. If genome sequencing is cheap enough, it can be used on every person, every cancer cell, every agricultural product, every bacteria, every virus, and even every pet. As performance hits key thresholds or cost drops below key thresholds, new applications can arise at predictable times.

What makes the future predictable with exponential trends is that we can estimate the crossing points when something becomes good enough, cheap enough, or valued enough for widespread use and new applications. Search engines arose from both the growing demand for finding websites in the exponentially growing World Wide Web and the declining costs of computer servers needed to offer a “free” search engine. Likewise, social networking arose as connectivity costs dropped, connectivity increased, and computer prices dropped. Kurzweil said we may not be able to predict which company will rise like Google or Facebook to dominate some new application, but we can predict that such an application will become feasible and then widespread due to the confluence of exponential trends.