As I mentioned in last week’s post, I’m writing a paper on stages of marketing automation deployment. Key findings will be presented in a Webinar next Thursday, sponsored by TreeHouse Interactive; you can register here. The paper itself will be available to Webinar attendees.

The premise of the paper and Webinar is marketing automation has a problem: clients who don’t move beyond basic email functions are unhappy. Last week’s post provided statistics that show how many marketers fail to make this transition, but it didn’t actually show why this matters. So let’s look at some more data that illustrates the trouble in marketing automation paradise.

First we’ll start with the paradise itself: B2B marketing automation has indeed been growing quickly, at about 50% per year over the past few years according to my estimates. 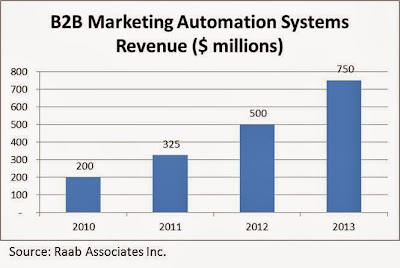 I do expect that to slow somewhat in 2014 as the core market of tech companies approaches saturation and adoption in other industries remains spotty. The great hope is that acquisitions by Oracle, Salesforce.com, Adobe, and other big software vendors finally push the industry across this classic Geoffrey Moore chasm from the beachhead niche to mainstream users, but that’s by no means certain to happen.

If and when that growth does happen, it will be fueled by positive experiences of previous users. But the news on that front is mixed: a survey by one of the industry’s best analysts, Jim Lenskold, found 60% of marketing automation users reporting increases in the key value measures of lead quantity and quality. That’s a happy majority, but it also means that about 30% found no improvement or even a decline. 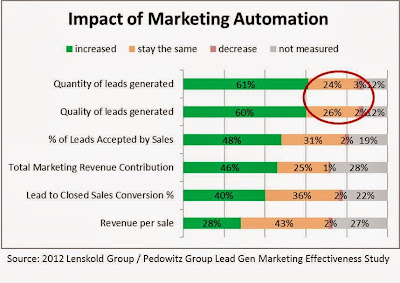 Questions about satisfaction give a similarly ambiguous result: just over two-thirds of users in a Winsper Group survey reported themselves satisfied with the business value of their system, again meaning that nearly one-third were neutral or actively dissatisfied. 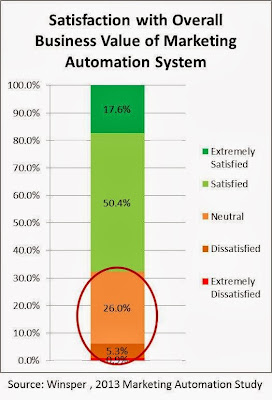 Even more scary (and just in time for Halloween, if you’re still looking for a costume): yet another survey, this by Holger Schulze, found that 31% of current marketing automation users anticipate changing their system within the next two years, nearly always because they want better or different capabilities. 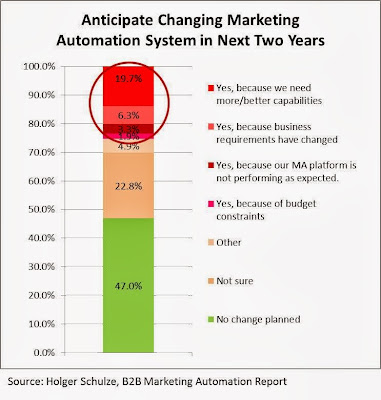 Although these figures come from different sources, they all point to the same conclusion: about 30% of marketing automation users are not happy with their systems. The Schulze survey suggests that most believe a different system will give them better results, so they’re not yet ready to give up on marketing automation entirely.

But will those users really do any better with a different product? I’d be the last person to say that all marketing automation systems are the same, but it’s also true that the vast majority of systems purchased have all the functions needed to run a successful marketing program. Some fraction of users really did buy the wrong product, but I’ve no doubt that most have problems due to flawed deployment.

One final survey reinforces this point. This one, from BtoB Online, found that just 26% of users had fully deployed their system – and nearly 40% had only some or moderate adoption. 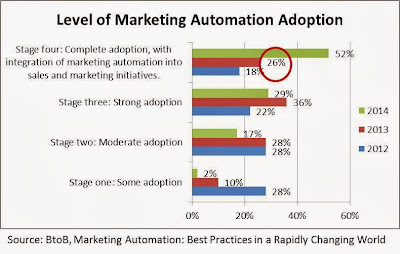 I’d guess that the dissatisfied users in the earlier surveys are concentrated in the low deployment groups in this survey. But if that’s true, those marketers are abandoning their systems before giving them a real chance. The BtoB survey does show that strong and complete adoption have increased considerably from 2012 to 2013, which is good news. It also shows that full adoption will double next year, which would be even better news if it happened – but those figures probably reflect aspirations more than reality.

All of this brings us back to where we started: rather than blaming their tools, marketers need to work harder at ensuring full deployment of the systems they’re already purchased. Join me at next week’s Webinar for a roadmap to making this happen.