The Interwebs have delivered an unusually rich trove of data about the marketing automation industry in the past few weeks. Other than Raab Associates’ own VEST report, we’ve seen surveys of active buyers from Software Advice, usage figures based on direct observation from Mintigo  and Venture Beat (using Datanyze), and another broad-based survey from Pepper Global and Holger Shulze. Taken together, these provide a clearer picture than usual of the state of marketing automation. Here’s how I see things. 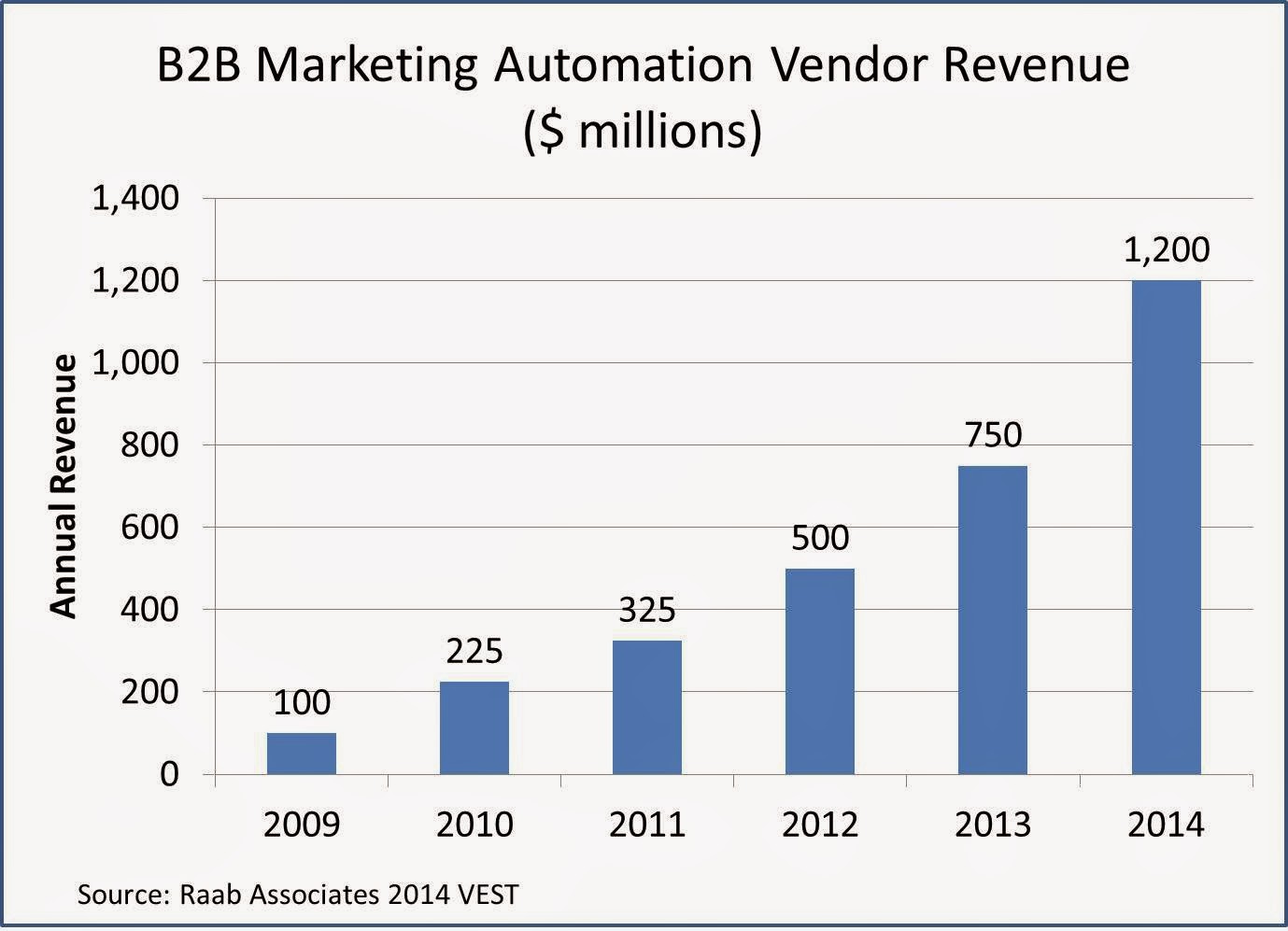 The main basis for my prediction is high growth that vendors reported in 2013, and in particular a trend towards higher revenue per client among the vendors who share that information with me.

My VEST data suggests that maybe 3% of micro-businesses (under $5 million revenue) now use a marketing automation system, and under 10% of larger firms do.

This varies hugely from the usual survey results, which often show something like 50% penetration.  The reason is selection bias: most surveys are answered by people who are actively engaged in marketing automation.  They are vastly more likely than average to have a system in place.

The Mintigo results confirm this.  Mintigo’s technology scans the Internet for things like job listings and Javascript tags and infers from those which products are used at every company it finds. There’s still a bit of selection bias – it won’t work if a company isn’t on the Internet – but the impact is obviously much less. Mintigo’s conclusion across 186,500 B2B companies was that just three percent were using the most common marketing automation systems: Oracle Eloqua, Marketo, HubSpot, and Salesforce.com Pardot. Penetration reached eight percent among larger firms and varied substantially by industry. 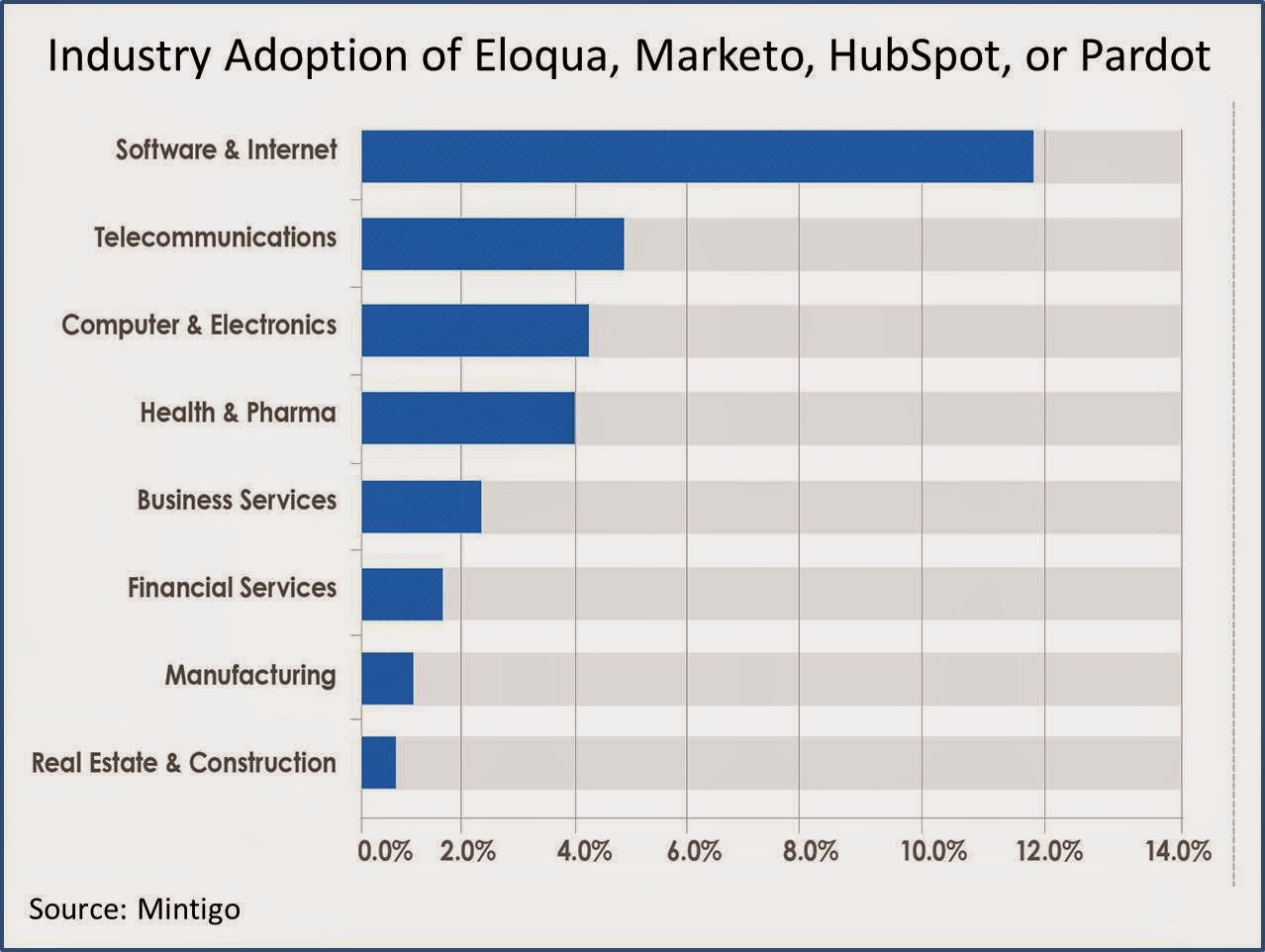 Mintigo sagely warns that industry penetration rates are not the same as share of marketing automation customers, since some industries are bigger than others. Software Advice does show the number of prospective buyers by industry: not surprisingly, tech is still the most common industry among new buyers.  But more interesting is that 77% come from somewhere else. I don’t have any historical data available but strongly suspect it would confirm that the industry is increasingly selling outside its original base of tech clients. 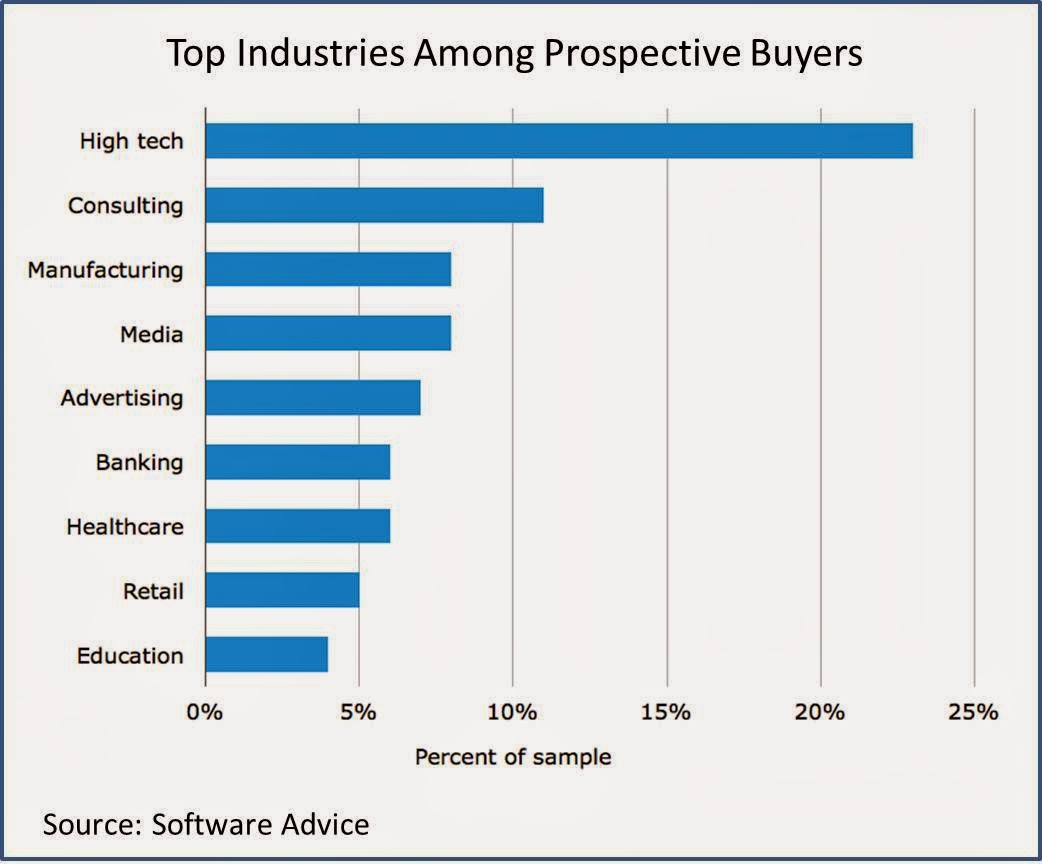 Both Software Advice and Pepper Global asked what features marketing automation buyers want. This is a pretty common question so the answers were not very surprising.  In fact, what was most impressive was the relative consistency of the rankings, with ead nurturing, analytics, and lead scoring at the top in both surveys, email and campaign management in the middle, and list segmentation is at the bottom.

Those top three are the key improvements that marketing automation provides over simple email or CRM systems, so this prioritization makes sense. It was intriguing to see inbound marketing and social media marketing ranked so low on the Software Advice data – I read this to mean that marketers already get them from systems outside of marketing automation and don't see much need for a change.  Similarly, the Pepper Global data’s low ratings for lead activity tracking, lead capture, and Website visitor tracking reflect that marketers have systems in place for those.

Pepper Global also asked some interesting questions about evaluation criteria and obstacles. Again, there were no particular surprises in the answers – marketers care more about cost, integration, and ease of use than vendor or technical details. (I guess meeting functional requirements is assumed.) Similarly, it’s no surprise to see the biggest obstacles are budget, employee skills, data quality and content.  The two sets of answers do correlate (budget relates to cost; employee skills relates to ease of use), which is reassuring. 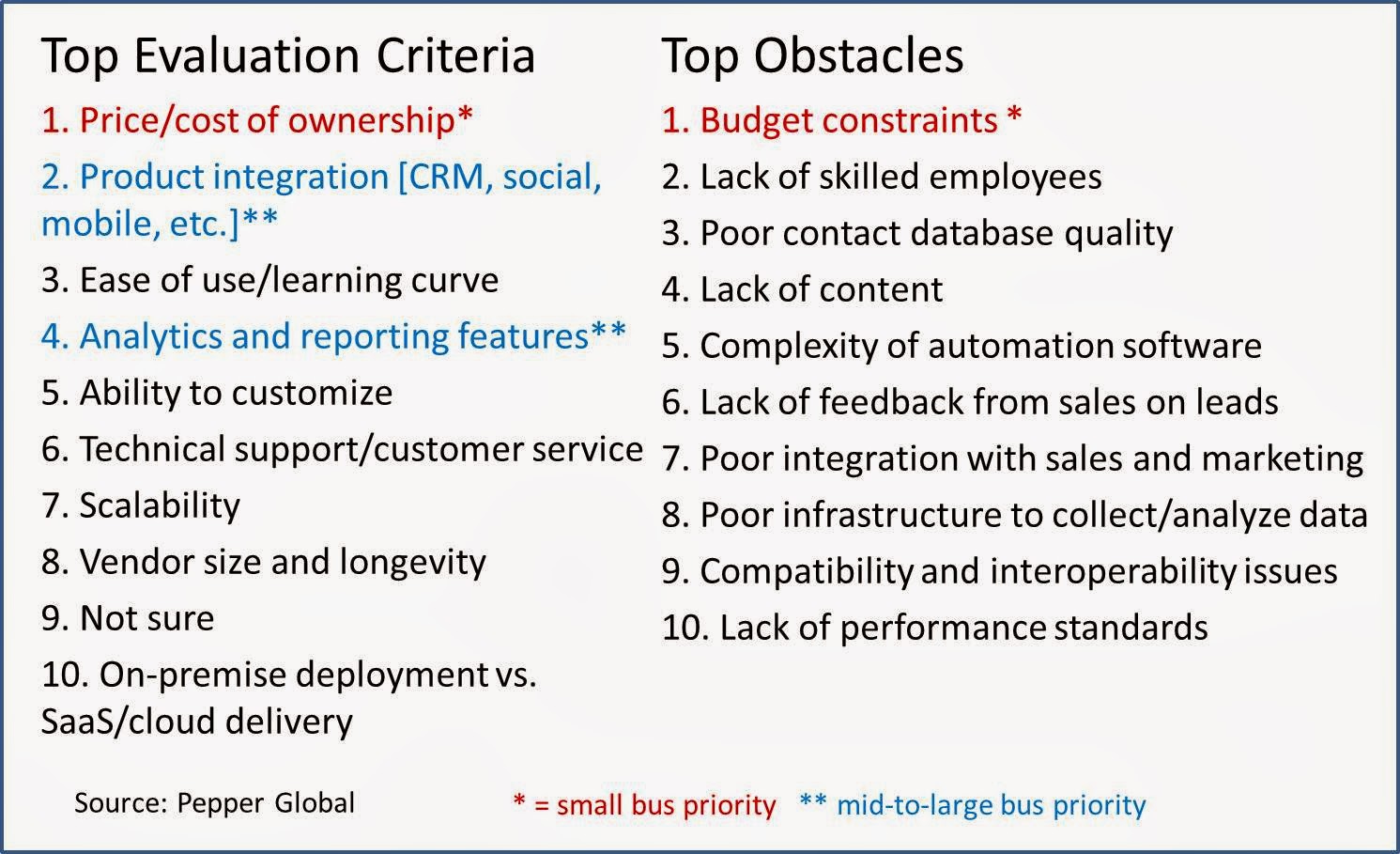 But take a closer look.  Did you notice how few of these obstacles can actually be addressed by marketing automation functions?  The real issues are budgetary (budgets and content), organizational (skills, data quality, sales feedback, sales integration, and performance standards), and technical (data collection and compatibility). This has practical implications for how marketing automation vendors should position themselves, invest in product development, and supplement their products with services.

Pepper Global also makes some intriguing observations about differences in responses from small businesses vs. mid to large businesses: cost and budget are the biggest issues for small business, while integration and analytics matter more to bigger companies. Sadly, they didn't publish additional details. Still, it’s worth being reminded that these differences exist and should be considered by vendors in their planning and by marketers in their system selection.

The Real Competition Isn't Other Vendors

As the industry penetration figures indicate, the real competition in most marketing automation purchases is a different technology, not another marketing automation vendor. Software Advice drives this point home by showing how prospective buyers are currently managing marketing activities: nearly half are relying on a CRM. A surprisingly small fraction cite email, although presumably they all have email capabilities.  I'd guess this is because they are answering specifically about marketing management.  If I were an email vendor, I'd think about that one. 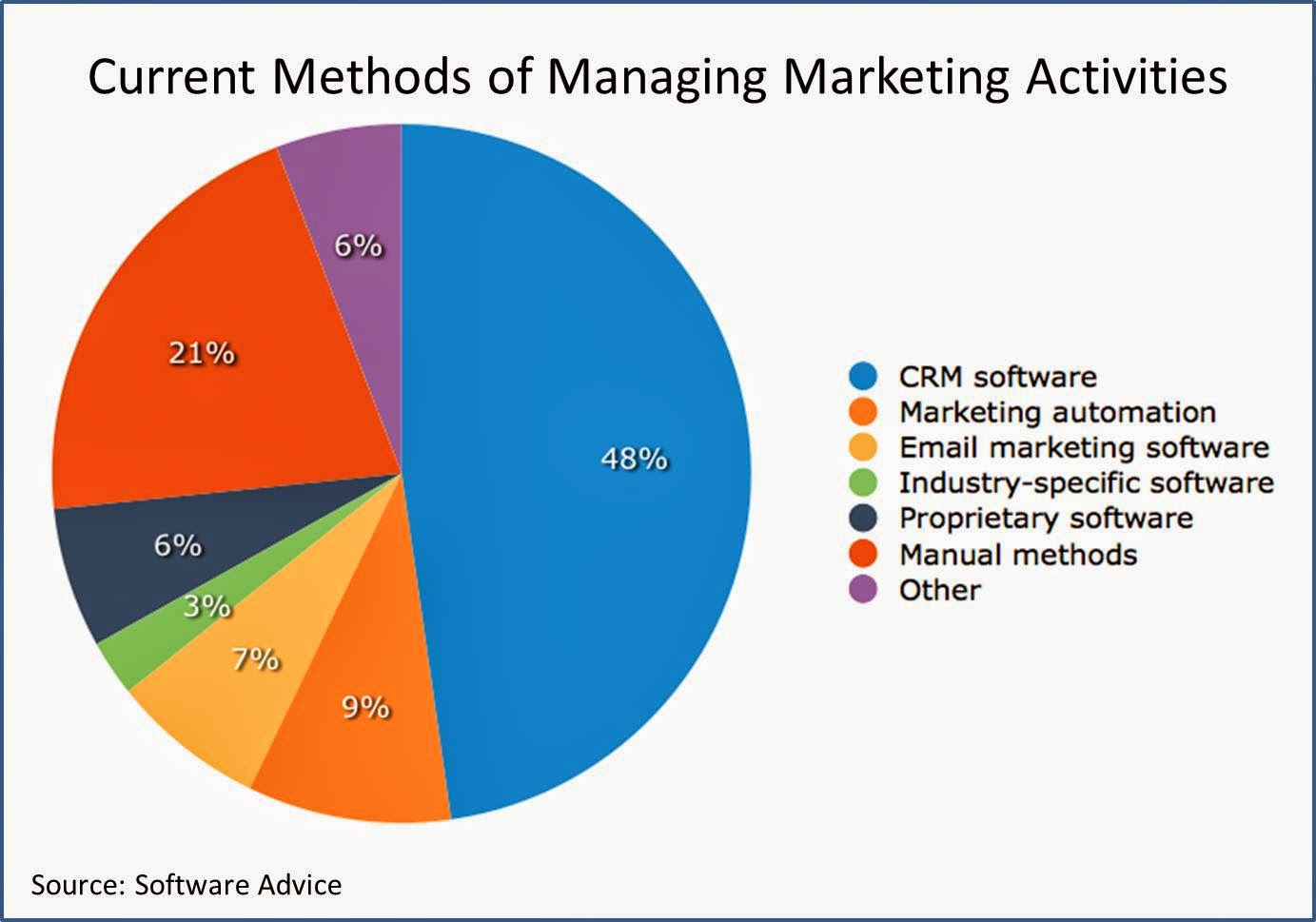 Given the industry's low over-all penetration rate, it's interesting that nine percent of prospective buyers are looking to replace an existing system.  This suggests they like the idea of marketing automation but aren't happy with their particular product.  Sure enough, just over ten percent of the buyers say they're evaluating a new system for exactly that reason.  But the much more common reasons apply to people with no marketing automation in place: improve lead management, automate processes, and get more/better features than current [non-marketing automation] tools. 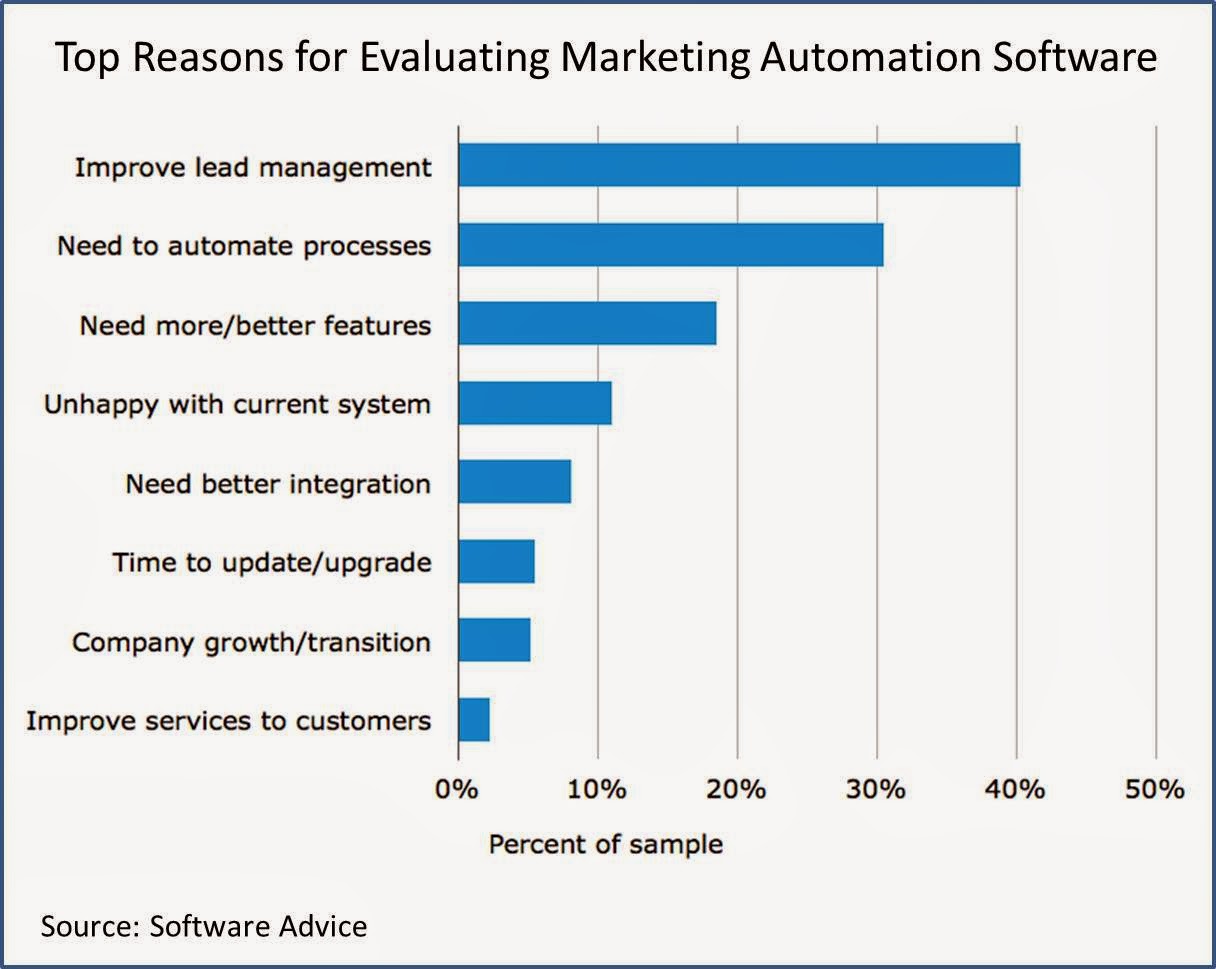 Narrowing the focus to existing users, Venture Beat and Pepper Global both have some data, as does the VEST. Remember that these come from different sources:

Venture Beat uses Datanyze to read the actual systems that are embedded in marketers’ web sites.

Pepper Global is based on a survey of the B2B Technology Marketing Community on LinkedIn. 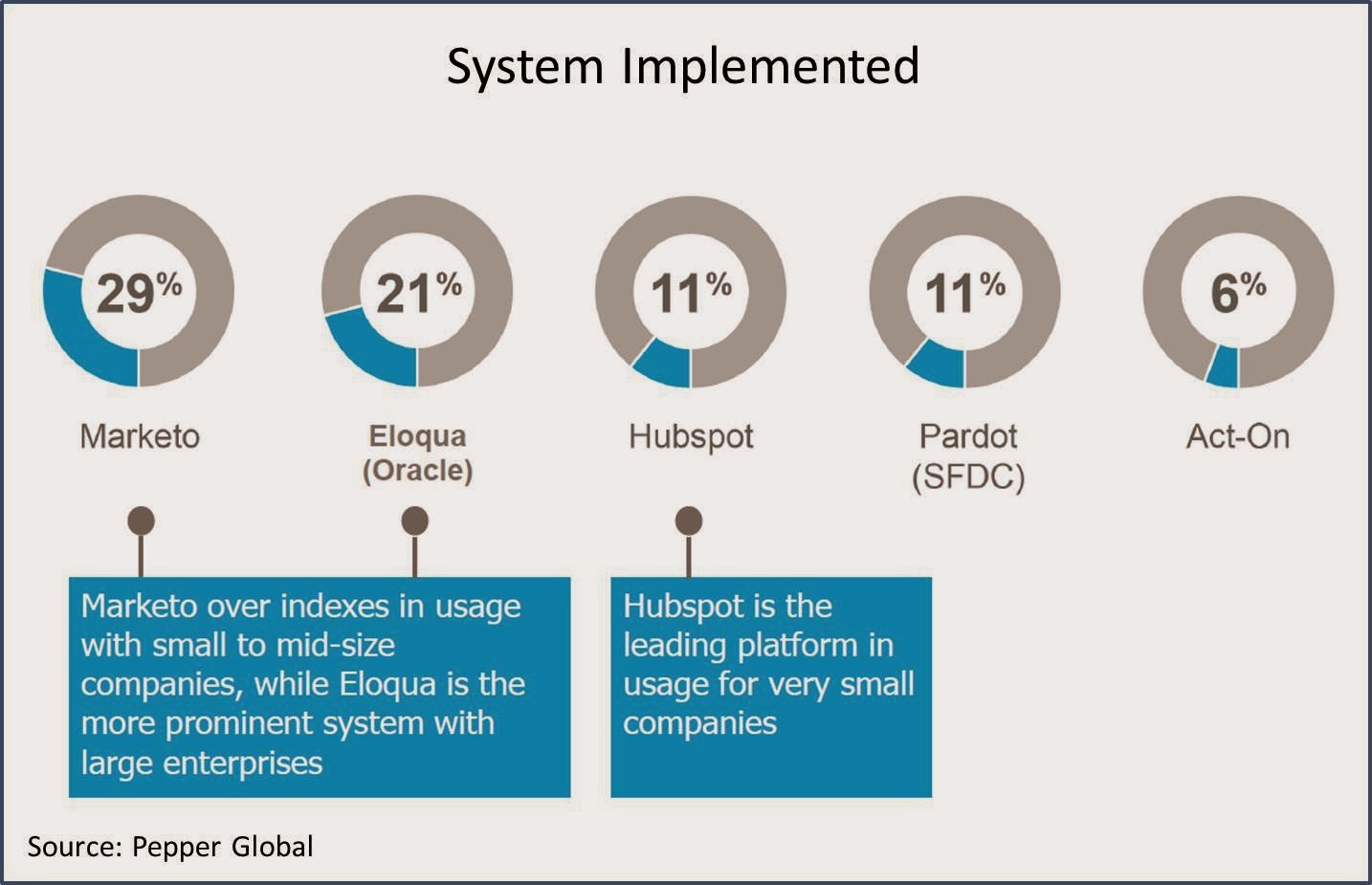 VEST data is self-reported by the vendors. 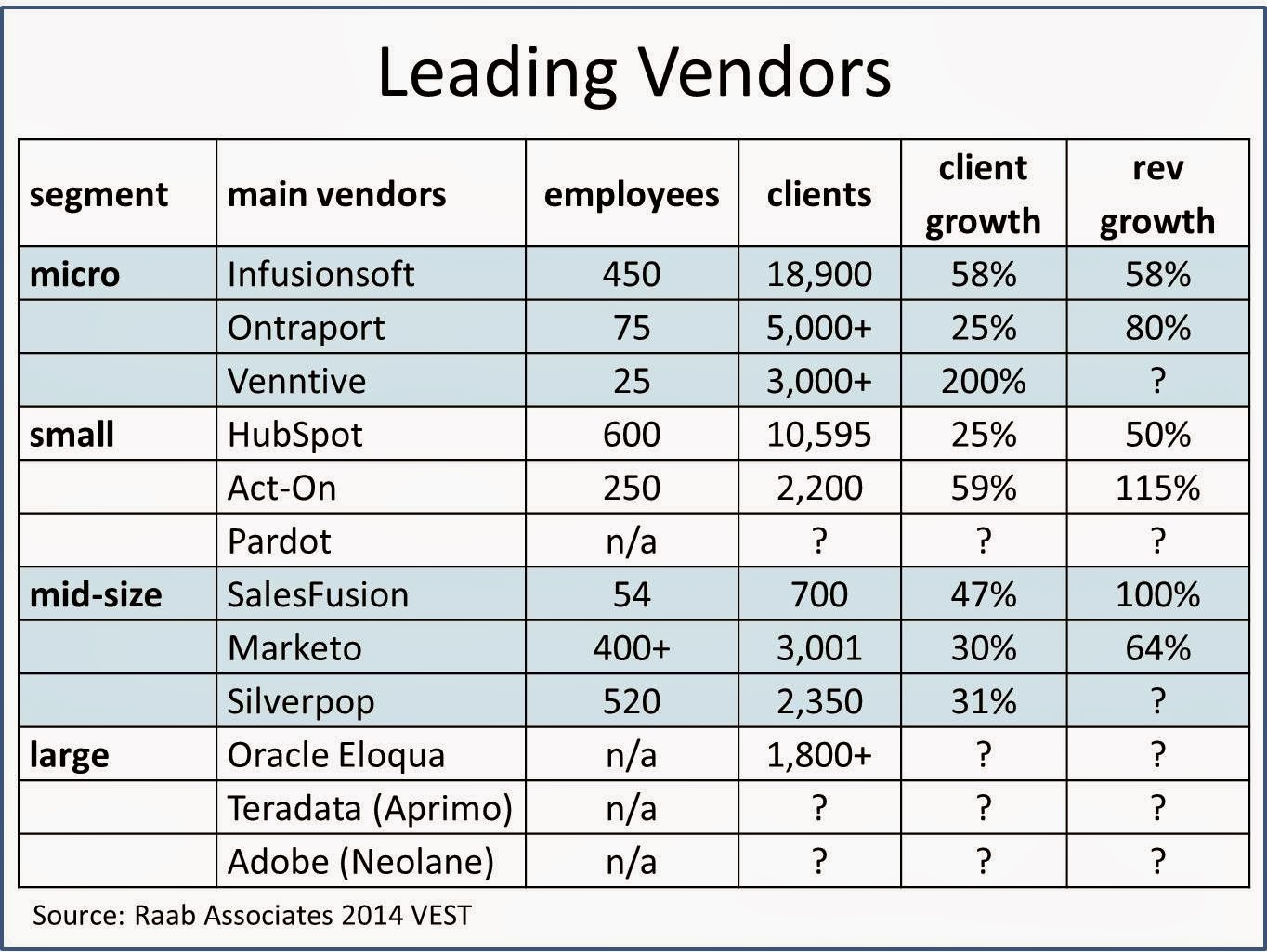 The results are broadly consistent once you take into account that Pepper Global’s sample has many fewer small companies than Venture Beat, and thus understates clients for vendors like HubSpot and Infusionsoft. One extremely important caveat is that these figures are counting clients, not revenue: HubSpot has three times as many clients than Marketo but 10% less 2013 revenue. (The revenue figures aren't on the chart but are public: $77.6 million for HubSpot and $85.1 million for Marketo.)  As the Pepper Global slide suggests, different vendors are strongest in different customer segments.

There are plenty of vendors beyond the handful of industry leaders. The Venture Beat slide lists some; we report on a good number of them in the VEST; and I've written about others on this blog. Here’s a list I recently pulled together, along with client self-reported counts. It still leaves many out. 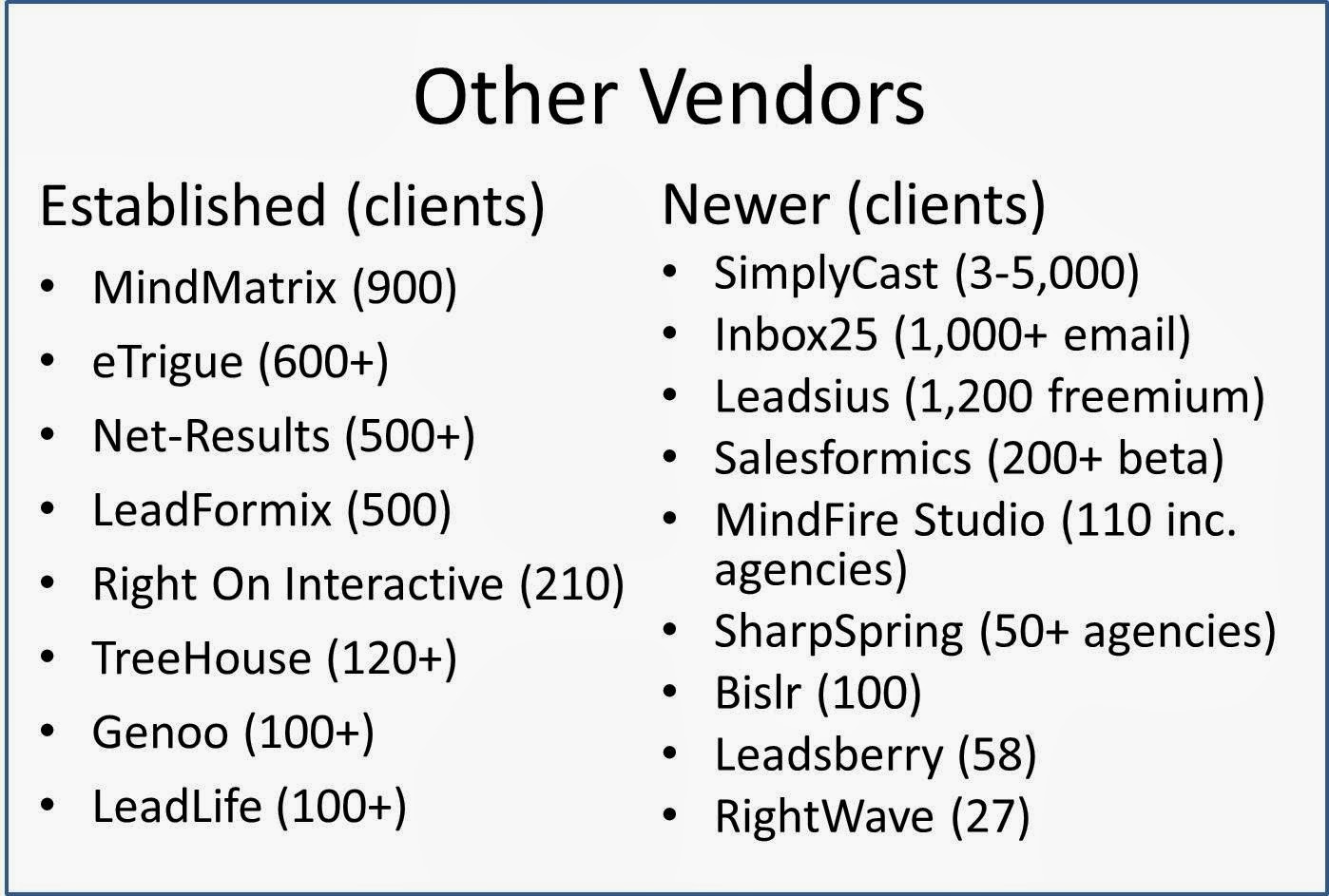 Why would anyone pick a vendor other than the leaders? One answer is, because they don’t know anyone else: some vendors still tell me more than half their deals are uncontested, meaning they are selling against doing nothing or an incumbent CRM or email system. Presumably this will become less common as more marketers realize that marketing automation systems are a category with lots of options.

Another, better answer is that the systems really are different. Sure, all marketing automation products share the same core features: email, landing pages and forms, web behavior tracking, nurture campaigns, lead scoring, CRM integration, and reporting. But there are still significant differentiators.  In fact, I'd argue these are becoming increasingly important as ways for new and smaller companies to find niches where they can compete. Here’s a list of some of the approaches and a sample of vendors who have taken them. (Many vendors would fit into multiple categories; pardon the oversimplification.) Note that just about everyone cites low cost and ease of use, as they should: they're what buyers say are most important.  But this means those claims pretty much cancel each other out, regardless of the underlying system's actual merits. This leaves more concrete differences, some based on features and others based on service or distribution models. Even the surveys showed that features alone will rarely drive a decision, the exceptions are features that are absolute requirements and hard to find, such as integration with a particular CRM system or support for channel partners.  So far, every differentiator on this list can point to at least some measure of success.

So there you have it, folks: my current snapshot of our rapidly changing industry.  Thanks to Mintigo, Software Advice, Venture Beat, Pepper Global, and all the other people who publish such great data.