In the spring, Google rolled out algorithm changes to devalue “non-mobile-friendly” websites in its search rankings. This has added additional fuel to the ongoing mobile marketing conversation.

However, your website is only one component in your total ability to connect with consumers, who have an entirely different mind-set in their personal mobile world. Another phenomenon rules mobile marketing: the concept of immediacy. [Tweet this] 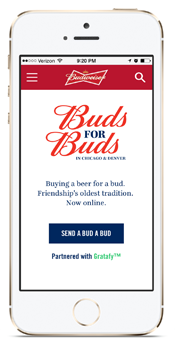 Two brands that have applied immediacy to their mobile marketing are Budweiser and Krispy Kreme. Read on for what they’ve been doing right.

How Budweiser Gave Buds Instant Access
Budweiser wanted a way to create a user experience that transcended the journey from social ads and posts to mobile video, sharing, location-based guidance, and point-of-sale experience. And it wanted to do all of that in in a way that gave consumers immediate excitement.

The brand came up with its Buds for Buds campaign, which enabled consumers to gift a beer directly from budweiser.com and send it to a friend via Facebook, to be redeemed for immediate or future redemption at a list of local bars identified right on their phones.

Consumers were activated via targeted Facebook ads and guided to a mobile site that authenticated both the purchaser’s and recipient’s ages. They could then share their “Bud moments” on their timelines.

As for results, the program achieved a 3x in-bar sales lift—meaning people spent three times the value of the beer when redeeming at the bar/POS. Redemptions were 100% of participating bars (thereby increasing on-premise spend and traffic during the program), and purchase conversion rate was 7x industry average. Additionally the program received global media coverage. A larger campaign is planned for the future.

Krispy Kreme Lets Consumers Know When To Come ‘N Get ‘Em Hot
Most people would agree that donuts are better when they are hot out of the oven. This is especially true for Kripy Kreme, which has trained its legion of devoted fans to look for the red light indicating a fresh batch is waiting. 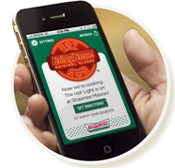 To take advantage of the reach and immediacy of mobile, the company launched its “Red Light App,” which lets users map the nearest Krispy Kreme location from their phones and receive an alert when a “Hot Now” light is activated in their area. The signs have a sensor that transmits a signal directly to a software server when illuminated. Once happy donut eaters have satisfied their cravings, they are encouraged to use the hashtag #KrispyKremeMoment to post the hot word to others.

According to Forrester, which used the app as a case study, without spending a penny on marketing, Krispy Kreme saw a 6.8% increase in same-store sales since the app hit the market. In its most recent financial call, the company disclosed systemwide domestic same-store sales rose 5.2% and revenues increased 9%.

TakeAways
What can marketers learn from these examples?

1. All marketers know they need a mobile component to their overall plan. However, mobile and its nuances need to be considered a lifestyle connection rather than merely as another form of media.

2. How consumers incorporate their phones and tablets into their lives requires marketers to develop a new mind-set of delivering a satisfying experience with an aspect of immediacy.

3. Mobile marketing is more than a one-dimensional SMS text message. It needs to be incorporated into every aspect of touch points and interaction, from Web to bricks and mortar.

Your consumers’ personal mobile worlds are a direct extension of their lives. Therefore, a successful mobile strategy needs to find the missing links to fulfill needs, offer solutions, and deliver value. With mobile being a prime access point to sales, it is innovation and, most of all, relevancy that ultimately determine your success on this ever-growing platform.