Can computers understand an individual human’s personality (and then, presumably, use that understanding to better target marketing messages)? It turns out that’s no longer even a question: if you haven’t yet played with CrystalKnows, be prepared for some weirdly accurate insights into yourself and those you know well, based on public Internet information. And, yes, Crystal advises you how to interact with others based on those insights, going so far as to suggest changes to your emails to better fit the style of the recipient. If there’s a gap between this and letting a computer just manage the whole relationship without any human involvement, it’s almost too small to worry about.

So the real challenge isn’t having the computer analyze your data; it’s having enough data for the computer to analyze. People like me, who blog and Tweet incessantly, are easy enough to understand (or, at least, it’s easy to describe our carefully curated public personas). But many of your marketing targets are less visible. Finding enough of them to be useful is a major limitation for systems that rely on machine intelligence to help target marketing messages.

This is where Mariana comes in. The whiz-bang part of its pitch is using artificial intelligence (“deep learning” as in the Mariana Trench – get it?) to build personas by analyzing a sample of your existing customers. Users see attributes for each persona such as interests, titles, functions, tenure, and average deal size. Pretty cool, I must say. 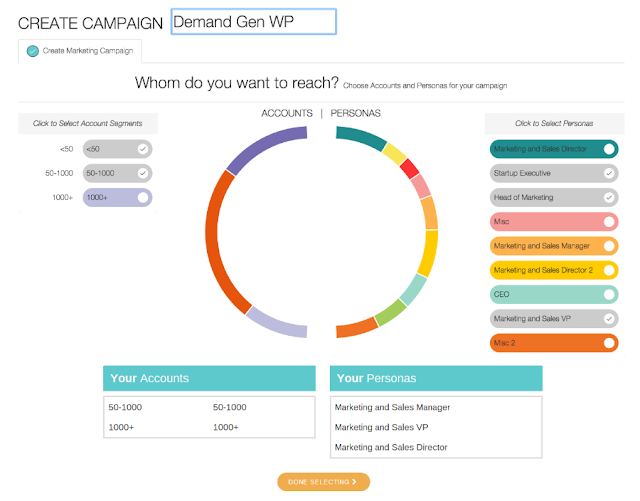 But the really special part is what comes next.  Mariana finds other people who match the personas, using its deep understanding of social data to accurately identify and find contact information on larger numbers of relevant people than other vendors.

How many more? Mariana told me that while other vendors might find social profiles on less than 30% of the records on a B2B email list, it regularly finds data on 50% to 80%. The difference is that Mariana uses its artificial intelligence to analyze connections between people – including unique access to the Twitter social graph, as well as where people work or have worked, groups they belong to, and the types of work they do. This helps it pick the right person when several people share the same name and lets it build detailed, accurate profiles ncluding Twitter and Facebook handles, employer, job function, and interests.  Of course, it can also assign each person to the correct persona for each client.

What does Mariana do with this information?  It currently offers two products: Prospect IQ to find new prospects and Conversion IQ to market to names already in the client’s database.  Both products start by uploading a training set of target accounts or closed and won opportunities and contacts from CRM. The system then does its magic to look up the companies and individuals in that set, find data about them, and built personas based on common clusters of attributes.  Clients can build one set of personas for their entire customer base or create separate personas within segments based on company size or industry.  You can call this Account Based Marketing if you like; Mariana does.

For Prospect IQ campaigns, users can define a target audience based industry, company size, location, and persona.  The system then returns contact counts for Facebook, Twitter, and email. Users create the marketing messages, helped by Mariana’s suggestions for which topics would interest each persona. They then choose which personas get which messages, set a budget and timeframe for each channel, and let Mariana execute the campaign.  The system will send message to the same person in multiple channels when possible and can run automated a/b creative tests to optimize results. Responses go to a user-specified landing page; Mariana does not reveal prospects’ identities unless they respond.

Conversion IQ follows a similar process except that Mariana works from a set of known contacts uploaded by the client. These are cleaned, enhanced with company and individual data, and assigned personas. Users then define campaigns and have Mariana execute them. Mariana has prebuilt integrations with Twitter, Facebook, Salesforce.com CRM, Pardot, Eloqua, and Marketo.

Pricing for Mariana is based on the number of campaign responses. It starts at $3,000 per month for a three month pilot, which includes the cost of advertising media at specified CPMs. The company was started in 2013 and officially released its product on March 1 of this year. It reports that pilot projects during the test stage yielded ten times the conversion rate of conventionally targeted ads.

Top 5 Ways To Get Feedback From Customers

How to Test an IVR System for Business?

Putting the Focus on People with Audience-Level Management

What are the Key Elements of a Great Delivery Experience?