For nearly a decade a global medical diagnostics company focused on its lead users—specialists in the field that were the most advanced. The company worked hard to understand the needs of these lead users and made them part of their customer advisory board. They also depended on this group for new product ideas and to evaluate ideas they had for product and service offerings. The lead users had become an integral part of the company’s innovation and development practices.

What a mistake! Through the application of Jobs-to-be-Done Theory and the Outcome-Driven Innovation Process, the company learned that its lead users did not at all represent the rest of the user population. In addition they learned that their persistent focus on the lead user population was the root cause of their declining position in the marketplace.

We made this discovery by employing the 4-step segmentation methodology that is part of the ODI process:

The segmentation analysis revealed 3 unique segments of physicians as shown in the opportunity landscape below: 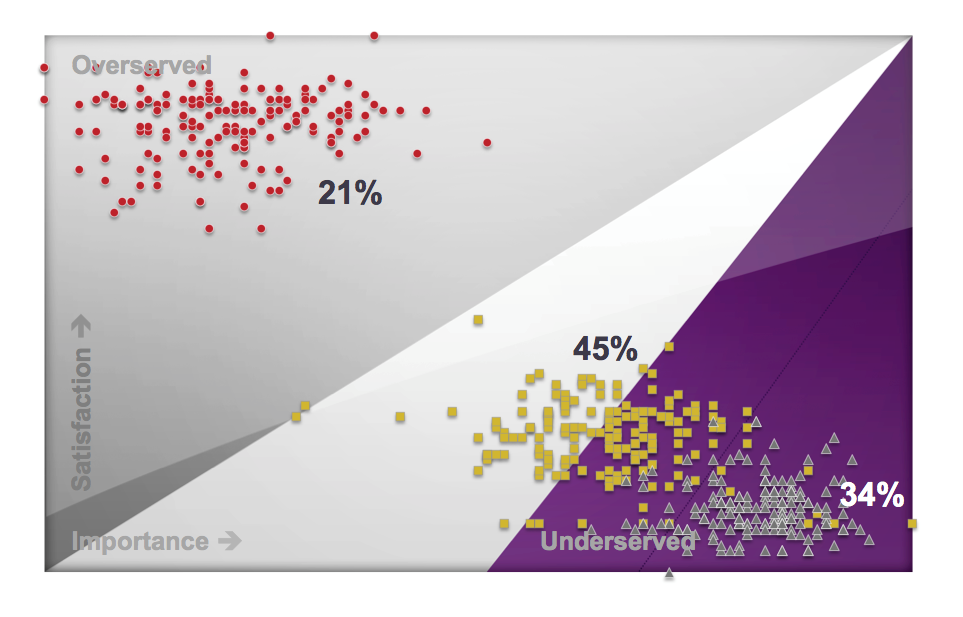 Through analysis of the data we learned that the physicians in the overserved segment were not at all dependent on the diagnostic equipment produced by the manufacturer to make an accurate patient diagnosis. As lead users they had the experience, knowledge and skill to make an accurate diagnosis on their own—and they only used the equipment to verify they were correct.

If this were the only segment of the market that existed, a Disruptive Strategy would be fitting in this market, as they would settle for a solution that gets the job done worse for a lower price (see the Jobs-to-be-Done Growth Strategy Matrix). But this segment did not represent the bulk of the users.

In stark contrast, 79 percent of the physicians (the two underserved segments) were highly dependent on the diagnostic equipment to gather the needed information and process it to make an accurate diagnosis. Their needs were vastly different than those of the lead users. Because the company was focused on its lead users, they failed to understand the needs of the underserved customers, putting themselves in a position of declining market share.

The discovery of these outcome-based segments changed the focus of the organization. They chose to decouple from the lead user and target the underserved physicians with a new portfolio of products and services that addressed their most underserved desired outcomes.

What were the lessons learned?