You know this already…

We respond to change differently.  There are lots of different categorisations, but we are usually described in groups a bit like this…

My categories aren’t too scientific.  You can find a more detailed (and politically correct) description of each group’s characteristics here or here, but no doubt you get the idea.

Here is something marginally more thought-provoking

The proportions of people in each group are often demonstrated like this: 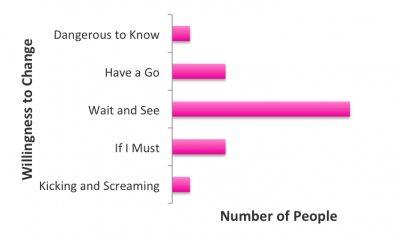 Most of us sit in the middle, firmly on top of the fence.  Which sort of makes sense, in a somewhat unscientific way, but this is still not new news.

And here is the thing that made me think

If you are trying to persuade people to do something that is desirable, like trying a new “never fails” diet… the shape of the curve (or maybe speed of adoption) moves upwards 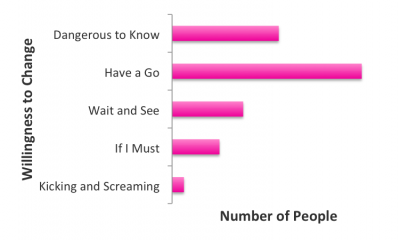 If you are trying to persuade them to do something that is a somewhat more disagreeable, say Morris Dancing, the shape of the curve moves downwards. 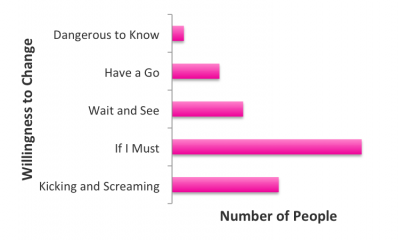 But it’s not just desirability that influences people:

How about adding to the mix…

All of which will effect how quickly people change.

But maybe most importantly of all, how about awareness?

Is your platform really burning if nobody ever sees it?