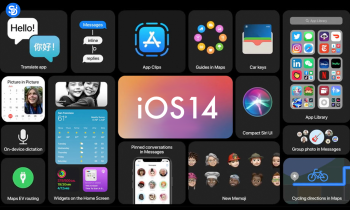 iOS is one of two mobile operating platforms that are ruling the smartphone industry. Owned by Apple, the quality and security of this OS is what the company claims for. This is the reason why even when more than 60% of the market is captured by Android, still Apple managed to keep its loyal customer base intact. iOS recently launched the latest version which is iOS 14 and in this article, we are going to talk about all the important features that this update has. iOS always manages to create buzz and excitement among its users and the mobile development industry.

Something that most people were excited about was the home screen and they have made great changes to it. There is a support widget that has been added to the home screen with this update. This is just the tip of the iceberg and the article will have much more when you read on. There are a lot of features that have improved with this, and then there are some that are new. iOS 14 is what people wanted and also what they didn’t expect. The initial version of it was released in June 2020, and since then, it has been improving.

An iPhone app development company needs to comply with the latest update and release an amazing app supported by the most updated features. iOS is known for the security and the experience that they provide to their users. This is what has kept it going strong in the market and this is what will keep it there for long. The reason for this is the brand name that they have created. Apple has always preferred quality and this update enhances that purpose. Apple has also launched the latest iPhone and with that, the curiosity increased even more.

Users Are Excited About the New Features

iPhone users are really excited about the update. The whole world might be mocking Apple but iPhone lovers are dedicated to it. This is also the reason why Apple does everything so well and according to its users’ tastes. iOS 14 has taken into consideration the problems that users faced and the suggestions that they sent them. There are features that might look inspired but will make iPhone users happy as earlier those features were not as efficient. According to the survey over user sentiments, iPhone app development companies found to be appreciating the changes.

The New Features Of iOS 14

Apple has integrated some really new and exciting features in their latest iOS version and now that this version is out in the market, let’s have a detailed insight about a few of them.

This feature helps the phone to look quite manageable. When someone deletes an app from the phone’s storage, it will not be available on the home screen. In its place, the deleted apps will directly go to the app library. The main advantage of this feature is that the newly downloaded apps will not crown the home screen. The settings are easy and it can be changed into old functionality whenever required.

2. Curation of Applications Into Categories

The app library also helps to curate applications into several categories including social, entertainment, creativity, work, and many more. Categorizing applications makes it easier for users to view, navigate, and find them. This feature is getting a lot of love lately from its users because it was highly anticipated and is one of the competing features when it comes to Android.

This is one of the features that looks inspired by Android. Earlier the call notifications used to take up the whole screen of the device and stopped anything the user was doing. There are many situations in which the user is watching something and then a spam call just disturbs their experience. This is something that will not happen with this feature. Users will get a small call notification on the top of the screen where they can either pick it up or reject it by sliding it away. It will make things convenient for users. This is one of the most demanded features and almost every iOS app development service provider was expecting this feature.

This feature was there on iPad but now with the launch of iOS 14, this will be present in iPhones as well. Apple decided to provide the best of its services to its iPhone users. Now, users will be able to do other things while they are FaceTiming. This will improve their time management and also will make them do more things at the same time and increase their productivity. Most people who have iPhones are working class and they need these features.

5. Updates for Siri And Searching

Siri has been a great help to iPhone users and one of the most talked-about tools for mobile app development companies. This is the reason why most people will never switch to Android. Siri has got updates and can now respond better to commands. Also, it can now manage a lot more things for users. Along with it, searching has also improved. This is something that new users will appreciate and like the most. Searching is something that everyone does and if it gets improved, users will be happy.

This has been a problem that iPhone users were facing for a long time. Even though Apple’s default applications are safe, they don’t have features like third-party applications. If we take the example of Safari and Chrome, all users will prefer Chrome. The reason for this is an easy interface, more features, and compatibility with almost every web application. Earlier users had to open everything distinctly in the browser, or copy the link and paste it in Chrome. Now, they can just change the default browser application from Safari to Chrome and open every link in it. This will give users the freedom to choose the app they want as default.

7. Updates in the Messages App

The Messages application has got updates in almost all versions. This time the old features like memoji have got some updates. There are new hairstyles and other things that make a memoji look a lot better. There are other updates as well that will make users happy. This is something that might not stand out but people who use the Messages application a lot will love this one. Alongside, iPhone app development companies can leverage the update.

The last update came with Siri was being integrated with a translator. This means that Siri could translate things for users but now this translator has got a standalone application. Yes, it will be efficient and will be easy to use for people who just want to convert text for copy-pasting and forwarding messages. This feature will be loved a lot.

Safari is one of the things that Apple is proud of and it should be. The browser looks cool, gives a lot of features to users, and is improving a lot. This update came with new features for the browser.

There can’t be an article in which we talk about the new features in the latest update and miss out on the security aspect. Yes, the already super secure iOS has got enhancement in this specific part. It will be super hard now to get inside the device and look up information that is personal and sensitive.

iOS 14 has everything that users expected and some things come as a surprise but a pleasant one. Most of the important features have been mentioned above and all of them are accepted well by users. There is a great buzz about this version in the market.

The report of the update is positive and looks like it will allow any mobile application development company to make applications that will also become a default in iPhones. The market interest has increased and eventually, the numbers will depict the success of this version.