It’s fair to say that the number is often larger than the average salesperson is aware of, let alone in close contact with.

Various studies have put the average number of active stakeholders anywhere between 5-12 in large and complex buying decisions - and in some cases the number will be even higher.

This is important because organisations have learned from painful experience that autocratic, top-down decisions rarely result in a successful implementation.

In today’s consensus-seeking management environment, without the support of a broad range of key stakeholders, decisions are likely to be delayed or abandoned.

That’s why it’s never been more important for salespeople to identify, engage, assess, and build positive relationships with as many members of their prospective customer’s stakeholder group as possible...

So - what do we need to know about the stakeholder group? Firstly, we need to make sure that we have identified as many of them as possible. There are a number of ways of doing this:

It’s important to remember that - particularly if this is an unfamiliar purchase for them - that our contacts(s) simply might not know who all the stakeholders are likely to be. They are likely to guess that the stakeholder network is going to be simpler or smaller than it actually is.

This is more common than many salespeople are willing to acknowledge. It’s important not to take things at face value, particularly if our prime contact fits into the “inexperienced buyer” category and if their view of the decision process seems over-simplistic and unrealistic.

It’s also important to recognise that if the purchase is seen as a significant decision, there is often more than one stakeholder group involved:

It’s particularly important that we do all that we can to identify, engage and assess the decision-making and approval stakeholder groups in our significant sales opportunities, and that we recognise that a failure to do so adds significant risk to our chances of winning their business.

What do we need to know? In addition to identifying the players, I believe that there are six key factors in assessing the members of our customer’s stakeholder groups:

At the start of any sales cycle, these factors will typically all be “UNCERTAIN” - and they must remain that way until we have evidence to support a different assessment.

It’s also important to recognise that our assessment of some of these factors may change or evolve during the course of the sales cycle.

Let’s examine each of these in turn:

Their role in the decision and approval process

Stakeholders can play a number of different roles in the decision process:

Sometimes stakeholders play more than one of the following roles - if they do, it’s best to categorise them in their most important role. It’s particularly important - if you can - that you develop a strong relationship with the executive sponsor.

It’s said that “you end up talking to the person you sound like” (or to no-one at all). For example, it’s critically important that your conversations with strategically minded stakeholders are about issues or topics they regard as important - otherwise you’ll probably never end up speaking to them again.

Their influence on the decision

Different stakeholders will have different degrees of influence over the decision-making process. It’s important to understand where the strongest influence lies:

It’s particularly important that you are actively engaged with stakeholders who have a dominant or strong influence over the process - relying on someone with moderate, weak or non-existent influence as your prime contact can be tremendously dangerous.

Their attitude to the project

If you cannot persuade stakeholders who appear to be against or strongly against the project itself to be more positive, you at least need to try and neutralise their input - by ensuring that the more positive and dominant stakeholders are able to carry the day.

Their attitude towards you

It’s important to also attempt to understand each stakeholder’s attitude to your organisation and your solution:

Once again, if we cannot persuade stakeholders who currently appear to be negative towards or strongly against our approach to be more positive, we at least need to try and neutralise their input - by ensuring that the more positive and dominant stakeholders are able to carry the day.

Finally, it’s important to assess how easy it is to access and engage with them:

Momentum is important in any sales opportunity. If we sense that momentum is being lost - particularly if a previously accessible key stakeholder is becoming increasingly difficult to reach - this should raise a red flag.

Based on everything you’ve learned about each stakeholder, there are two final considerations:

If you are able to create a personal benefit theme for each stakeholder that resonates with what’s most important to them, the more likely you are to win their support.

In any complex sales situation, perfect knowledge of every stakeholder is an impossible goal. But it’s almost always possible to know more - often a lot more - about the members and the dynamics of the stakeholder group if we first acknowledge what we do and don’t know.

In addition to identifying as many members of the stakeholder community, it’s important to know as much as we can about each member. It’s important that we don’t allow our judgement to be compromised by hope or assumption. If we’re not sure about a particular person or factor, it’s far better to mark that up as “uncertain” rather than guess - and then resolve to do what we can to make a more reliable and accurate assessment.

Stakeholder mapping is one of the core components of Inflexion-Point’s outcome-centric opportunity management framework (example below). If you’d like to learn more, and to explore whether the principles could be applied in your sales organisation, please reach out via LinkedIn or directly at [email protected]. 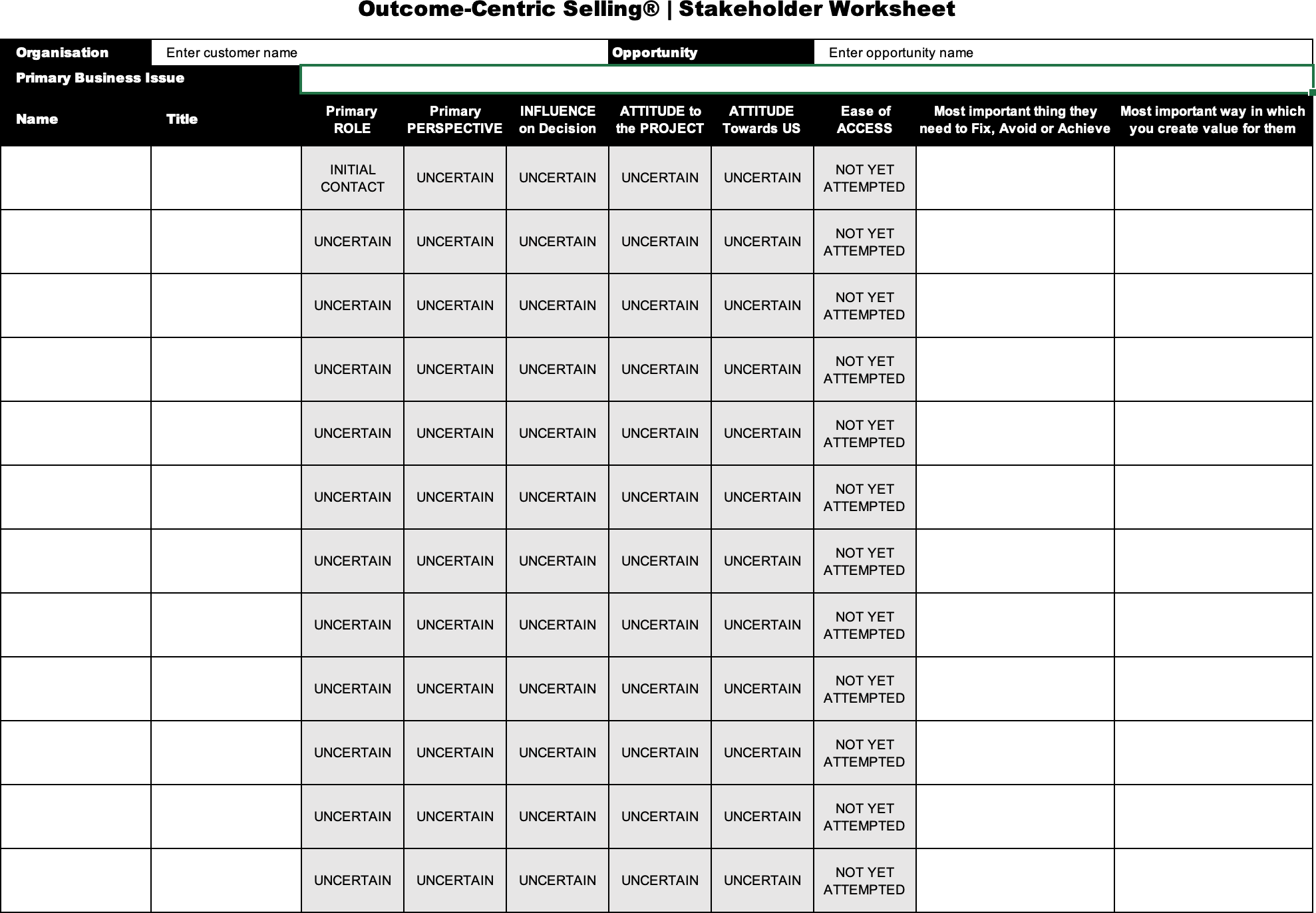