Here is your service quiz! You own a fine dining restaurant in, let’s say New Orleans. You have a wonderful dessert menu customers rave about. But, you notice that many patrons only order coffee since they are too stuffed for dessert. You do not want to make your entre servings smaller—it is one of your brand distinctions. But, you would love to find an ingenious way to leave guests more thrilled than a good cup of coffee is likely to ensure. 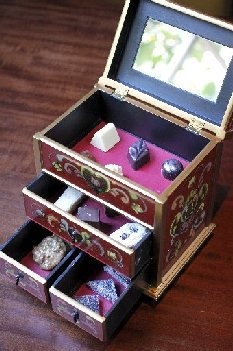 A common practice of upscale restaurants is to provide petits fours or small pastries (mignardises) “compliments of the chef.” Not, the Restaurant R’evolution in the Royal Sonesta Hotel in the French Quarter. The creation of executive pastry chef, Erin Swanson, the waiter brings out a red Peruvian jewelry box with tiny drawers filled with mini truffles, tiny shortbreads, baby peanut-butter biscotti, decorative chocolates, etc. It is the inventive finale about which customers tell compelling stories.

What is the origin of ingenious? It might come from the occasional cleverness of a single person. But, it can be the product of a deliberate and play-full focus that comes from allocating time for ideation, affirmation for creative output, and solid up-to-date customer intelligence needed to quality control the relevance and workability of the creative output.

None of these are surprising ingredients. The winners at ingenious customer service go one step further–they introduce a wild card catalyst. You learned in high school chemistry that a catalyst was some substance that increased the rate of a chemical reaction. A catalyst stimulates, sparks, incites and spurs. Here are three catalysts to propel you on your path to inventiveness.

When I interviewed Chef Erin about how she came up with the idea of a jewelry box for the unique presentation of her tiny desserts, she went straight to the wild card catalyst—reconfiguring the definition of her dessert. “I always enjoy making miniature colorful desserts. And, I have always thought of them as jewels. So, where do you put jewels?”

There is an old cartoon that appeared in the New Yorker magazine. It shows a forlorn salesman standing in front of his stern sales manager seated at his desk. The caption reads: “I know you’re always telling us to sell the sizzle and not the steak, Mr. Bollinger, but just what is the sizzle of a 90 ° elbow flexible copper fitting?” The salesman’s challenge was that he focused on the object (or outcome) and not on its hidden benefit as the primary target of his creativity effort.

A large cement company invited me to do a workshop on innovative service. They obviously faced the flexible copper fitting type challenge. Before I completed my workshop design, I put the task of reframing cement to my granddaughters. Children often lack the blinders we adults have adorned. So here is their sequence of thoughts I tracked on a notepad as a seven, nine and eleven-year-old wrestled with redefining cement or concrete. Cement, they told me, is glue, a Band-Aid, a mud pie, the three little pigs, suspenders for a new building, shoes for houses, and a dance floor for cars. When I shared their insight with my client he immediately envisioned several new products and ways to overhaul how they served their customers. Out of the mouths of babes!!

Catalysts came come from events—taking everyone to the circus, a theme park, a rock concert, a ropes course; an elementary school lunchroom during lunch can fan the flames of imagination. But a venue need not mean a physical place; it could mean people who come from a different place. Famous business writer Tom Peters called these folks “freaks on file.” What if you invited to your next staff meeting an artist, a group of 3rd graders, a mime, a magician, a comedian, a chef or a clown, (I know, clowns come all the time…but, I mean a real clown).

Progressive Insurance’s chief marketing officer Jeff Charney is deemed one of the most ingenious in the business. He is the mastermind behind the company icon, Flo. Ad Week in 2011 gave Jeff their Brand Genius award and named him marketer of the year. And what are Jeff’s catalytic efforts? A lover of temporary tattoos, he sent a high school marching band through the halls of corporate headquarters. He took his staff on a field trip to an empty building to throw paint filled balloons, and he once had a gospel choir close a staff meeting. What exterior force can best stir originality?

Attribute listing has been around since Alex Osborn coined the phrase in the ‘40’s. It means taking a word or phrase and forcing it to apply to your product, service or solution. Here is an example of how it can work. When a group of human resource professionals were gathered to problem-solve ways to reduce turnover, they chose a villain––Jack the Ripper––from the “Famous People” list below to apply to their issue.

When exploring what Jack the Ripper would do, someone in the group suggested that Jack would likely cut off all the employees’ legs so they would be forced to stay on the job. Silly? You bet! But it led to a rich discussion about hiring more people with disabilities–an employee group known to have a much lower absentee and turnover rate than employees without disabilities.

We are reaching the limits of value-added service (taking what customers expect and adding more). It is time for value-unique. And while there is an obvious ceiling on generosity, there is not limit to the ways to be ingenious. Since social media has become the playground for reputation building, service with a touch of creativity is fodder for feeding fame. Look for ways to make your customers’ experiences as delectable as one of Chef Erin’s amazing culinary creations!

P.S. I learned about the Restaurant R’evolution from my friend and fellow CustomerThink advisor, Michael Lowenstein, who wrote me about it. I finally got to enjoy it for myself the last time I was in New Orleans. The next time you are in New Orleans, I’ll bet you’ll dine at the Restaurant R’evolution. And, I predict that someone in your group will skip dessert just so everyone in your party can enjoy eating a delectable jewel.