In marketing, there’s this old adage that goes “Customer is King”. While this isn’t something any of us haven’t heard before; it’s still something that Businesses are yet to understand. One of the top companies today, Amazon, has built its entire business based on Customer Obsession.

“Even when they don’t yet know it, customers want something better, and your desire to delight customers will drive you to invent on their behalf.”

This is the mantra shared by the world’s richest person and Amazon CEO Jeff Bezos, which is the top priority every individual working for the company has to follow.

This isn’t just limited to Amazon though, it applies to every organization serving a sensible group of customers. The trust of these customers is what ultimately makes a business successful, and this fact is evident when you look at the focus of World’s top companies today.

But building this trust requires a lot more than just customer obsession. It most importantly requires building platforms and systems which help the consumers understand business practices better, and be accustomed to its terms and regulations.

In the end, it’s the interaction with customers and their understanding of the business which sum up the Customer Experience of a business. The modern Software Development trends of today hold a promise to reshape this experience! Technologies such as Blockchain, AR, IoT, and chatbots have immense potential in the form of the Transparency, Interactive environmental experiences, Instant connectivity, Interconnected networking devices and Personalized access to information they offer.

State of Customer Services in 2019

In a nutshell, one can define Customer services as a subset of Customer Experience which focuses on resolving issues faced by customers and providing them a platform to interact with the right people and technologies to understand their grievances.

A survey has shown that the percentage of Customer Satisfaction has significantly dipped by 2.81% in 2017 as compared to the previous year. At the same time, the demand for Live chat support has grown by around 8.29%. The lesson here is that the customers do like Live Chat support, but might need it to be much more interactive and more precise in order to really live up to their expectations.

More importantly, a few trends also prove that customers are not looking forward to interacting with people through phone calls to resolve problems. They instead prefer self-servicing to address their concerns. Self-servicing in the domain of Customer Services refers to the use of technological mediums by customers to resolve their issues on their own instead of dealing with Customer support through calls and chat.

In a survey by Nuance Enterprises, 67% respondents said that they preferred Self-servicing over speaking to customer representatives. Another report by Forrester shows a 5 % increase in usage of Troubleshooting/FAQ pages of company websites by customers in 2014 as compared to the year 2012.

Additionally, Microsoft’s Global State of Multichannel Customer Service report has found that over 90% of the customers prefer businesses to have a self-service and a FAQ portal. It’s clear that we’re moving towards a time when customers would want their issues solved as quickly as possible without lags or delays.

In order to bring up revolutionary changes which boost customer satisfaction, we need to first understand the need for customers to have their problems solved instantly. On average, the traditional customer services take 12 hours and 10 minutes to handle a service request.

In a world where hectic work makes time such a precious resource, such a lag is a cause of concern. This is where Blockchain, IoT, Chatbots, and AR can change the way how services requests are handled. 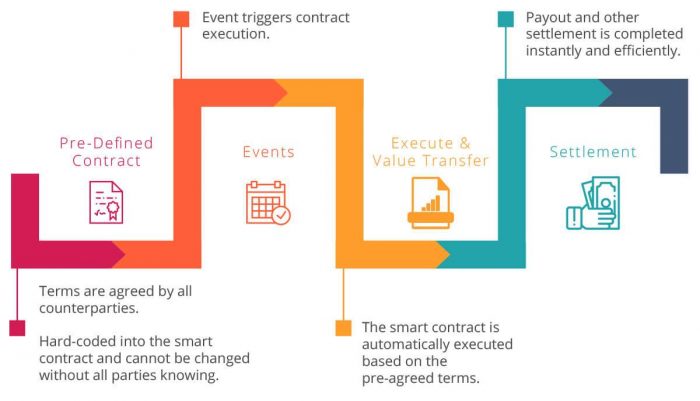 With further progress in IoT app development and Blockchain development services, these two can sync together to create a system which automatically generates service requests on behalf of the user. An IoT enabled device can directly send a service request to the service provider based on issues detected by sensors embedded within it.

Such a use case on a mass-scale may be highly ambitious considering the current progress. But such application of these technologies would eliminate the need for customers to manually contact service providers for obtaining repair services for their appliances.

Of course, its application isn’t limited to just that, there are more possibilities for its implementation which will unlock with further improvement in Blockchain development services and IoT app development.

Chatbots and AR; the revolution in App interfaces

While Chatbot development has always been touted to replace traditional chat interfaces used today, the advancements in Augmented Reality app development has uncovered a whole new realm of possibilities in the design of interfaces defining customer experience.

What makes Chatbots different from these traditional applications is that instead of displaying a well-sorted and distributed arrangement of information, a chatbot only outputs the result of inputs it receives from its user.

This makes a lot of difference when you consider how complicated apps and software can become with the number of features they load with them. With an increasing number of features loaded into applications, designing a simple and functional UI has become a lot more difficult than ever before.

This is where Chatbot development has a huge role to play. A chatbot is generally misunderstood to be a virtual assistant rather than an application. But that has never been the case, as they are made just similar to how applications are, with the major change being the implementation of algorithms and even AI to make it deliver information as per specific inputs.

Not only does the use of a Chatbot result in simple and functional application interfaces, but its ability to instantly respond to queries makes it much more efficient than humans. However, this technology still has a lot of ground to cover, but through AI and machine learning, we’re not too far from a fully-functional chatbot capable of replacing human customer service agents.

Another major advantage of a chatbot is that unlike a human agent, it can work 24/7 and is not vulnerable to any stressful conditions or complex situations a human may face. This is perhaps one of the reasons why over 60% of people today might prefer to deal with a chatbot instead of human assistance.

The other potential disruptor in this field is AR. The Augmented Reality app development market stood at a value of USD 2.39 Billion in 2016, and it’s expected to grow at a CAGR of 55.71% and have a valuation of over USD 61.39 Billion.

The signs of its rapid growth are already visible, with most of today’s flagship smartphones implementing unique AR features to grab enthusiasts. This spurt in growth initially happened due to the popular mobile game Pokemon GO, and today there is a diverse range of suggested implementations for this technology.

The software behemoth Google is one of the leaders in this race. At its annual I/O Developers conference in 2018, Google showcased the Potential of AR app development in the Google Maps app. The use of AR in the app included a virtual guide to provide directions to the user. Other implementations also included the ability to see information about a place displayed on the camera interface when it’s pointed to a specific object identified by Google’s AI.

Such use cases could go far and wide beyond Google’s application ecosystem in the future. We may be actually headed towards a world where companies would equip its customers and employees with AR-powered devices to navigate through workplaces, identify unknown people by just pointing an AR-powered device at them, and have a few similar use cases which would redefine the way customers and businesses interact with each other.

The next level of Customer Experience

Augmented Reality app development, Blockchain, IoT and Chatbots, all of these technologies have the potential to make the world a much simpler place to be in. But we are still far from such a time, as we’re marred by several problems and complications in the way.

The lack of reliability on Blockchain development services, the threat to employment caused by Chatbots, the privacy issues with the implementation of IoT and the costs associated with Augmented Reality app development; these are a few concerns which act as roadblocks to the next level of Customer Experience.

However, the growth of Software Development won’t stop with this. Within a few years, we’ll get to hear many new innovations such as these. In the end, it’s on the businesses to realize its potential and capitalize on it now, instead of lagging behind and widening the gap between themselves and the top companies of the world.

An investment in Software Development services for utilizing these technologies would be ideal today if gaining the trust of customers is one of the business objectives. In this age of information; a choice to adopt a new technology isn’t a second thought, but an absolute necessity.

21 Ways To 10X Your Customer Experience