My cliché detector starts chirping as soon as anyone says today’s marketers face more competition than ever before. Sepia-toned glasses notwithstanding, marketers have had competitors at least since the railroads (or maybe canals) made it practical for customers to shop outside the local village – and for even longer if you lived in a city. So competition has been tough for as long as anyone now living can remember.

I thought I’d found a legitimate exception when writing a recent paper for QuickPivot (available here) about the continued value of direct mail marketing. My core argument was that direct mail is needed to cut through the clutter created by the increase in advertising messages. Surely it’s self-evident that people get more advertising today than ever before, right?

Well, I certainly thought so when I wrote the paper. But I recently searched for some validation of the claim about more clutter.  Turns out that shockingly little research has been published on the question of how many ads people actually receive. The most authoritative-looking study I found was from Media Dynamics in 2014, which found almost no change since 1945 in ads people were exposed to, despite a near-doubling in the time spent with media (defined as TV, radio, Internet, newspapers and magazines).

Really? Just 362 ads per day? That certainly seemed low to me, even after recognizing that the study reports on paid advertising, as opposed to the brand logos you see on everything from football stadiums to a biker’s tattoo. The 362 is nowhere near the widely cited figure of 5,000 per day, although the origins of that are mysterious at best.

I looked further but couldn’t find any better data. Now I was really frustrated and pondered what it would take to make a crude estimate of my own as a simple sanity check. This ultimately led to the bright idea of using total ad spending and cost per thousand impressions to calculate total ad impressions per year. This can easily be converted to ad impressions per person per day. What I like about this method is avoids any need to estimate how many ads an individual sees per minute of media time or how many ads are theoretically available to be viewed. On the other hand, it assumes that advertisers get exactly the impressions they pay for, neither more nor less.  This is certainly not true in an absolute sense, but I’m willing to trust that the correlation between actual and purchased impressions is close enough to give an answer that’s approximately correct.

The table below shows what I came up with. Figures for advertising are easy: eMarketer publishes them all the time.  CPMs are harder to find.  I ended up using figures from sources including INFOACRS (which itself quotes eMarketer, although from 2008) and MonetizePros. There’s a bit of body English in there as well.  I do think the results are either reasonable or low – another widely quoted authority, Augustine Fou, shows generally higher CPM figures than the ones I used, which would result in estimating even fewer impressions from the same spending. 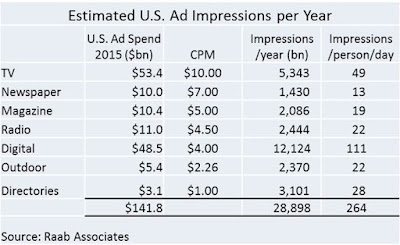 Bottom line, my numbers show 264 impressions per person per day.  That’s a little lower than Media Dynamics, but in the same ballpark. Interesting.

I will admit that I’m pleased with this methodology, which I suspect is roughly correct despite many flaws in the details. One virtue is it sheds some light on the original question of whether people are seeing more ads: since we know that total media spending is rising slightly and the mix is shifting towards the low-CPM digital channel, the number of impressions is almost certainly on the rise. You’d have to adjust any trend calculations for changes in population and in channel CPMs to know for sure.

On the other hand, the shifts are fairly gradual so it’s probably wrong to claim that we’re facing a sudden flood of increased advertising.  I don’t have the necessary data readily available to do more detailed calculations, but if anyone out there does have the data and the time to do the math, I’d love to see your results.

(And if you’re wondering: there will be about 80 billion pieces of advertising mail delivered this year, which comes to about 0.7 per person per day.)

How a Customer Experience Professional Deals with Angry Customers

Best Practices in Implementing a Customer Data Platform for Retailers

The Future of Work Will Remain Flexible, but Keeping Employees Properly Connected is Key