Brand image is expressed in many ways which can also help brand recognition. I wrote a highly popular post on the topic last year, which I would recommend you read if you haven’t yet done so. It’s called “What Every Marketer Needs to Know about Brand Image, Equity, Personality & Archetypes.”

Since then I’ve been thinking a lot about what brands are, above and beyond their names, logos and the product or service they offer. Which of them have a face, a voice, an aroma, a unique packaging, a slogan or a sound that immediately identifies them? If so, what does it bring in addition to the brand in terms of brand recognition?

Here is a very personal perspective of some of the best examples in each area. Feel free to add your own in the comments below.

Some of the faces which represent brands are of celebrities, others of unknown people who become celebrities.

One of the first faces I think of for a brand is Flo from Progressive. She has won the hearts of Americans over the years, with her helpful but quirky discussions with potential customers. She has also made insurance less confusing and more friendly through her “girl next door” looks and sparky attitude. Here’s one of the most recent ads with Flo from last year.

In 2012, an animated box was added to their campaign concepts, to represent the company’s products. Apparently, the vast number of ads with Flo – over 100 – had resulted in a “love her or hate her” relationship as some found her off-putting.

George Clooney has been the face of Nespresso for many years now. He started as smooth and superior, but over the years he has become more approachable, even funny. The latest commercials actually show him being injured in various ways, from falling pianos to “Mafia-type makeovers!” They are always entertaining, even for non-Nespresso drinkers.

Perhaps Nestle is trying to open their appeal to younger coffee drinkers who enjoy humour and hoping that the videos get shared on social media.

There are many other examples of “faces” that we now immediately recognise and associate with their brands. Even if some have been dropped over the years, they still maintain their strong connection:

Quaker Oats and the Quaker.

Coca-Cola and the Polar Bear

Marlboro and the Cowboy – Darrell

Duracell / Energiser and the Pink Bunny

Each face is chosen to represent the brand because it fits with the values with which it wants to be linked.

The Muscle man suggests toughness, never tired, perfect for house cleaning when you want the quickest and easiest solution to difficult jobs.

The advantage of a cartoon character over a real person is that associations are unlikely to change. Just consider some of the recent sporting disasters which resulted in brands firing their “faces”.

Almost all celebrity spokespeople are required to sign an agreement containing certain moral or behavioural clauses. These give the brands the right to cancel a contract if the celebrity does something which could be damaging to the brand.  Nike has done this with Maria Sharapova, Manny Pacquiao, Michael Vick and Lance Armstrong.  Tiger Woods was apparently dropped by Gillette, Accenture, AT&T, Gatorade and Tag Heuer. Wow, that must have lowered his income somewhat!

Find out more about the challenges of choosing a face for a brand in this excellent article on advertising law, and this one on the top15 athletes who were dropped by their sponsors.

Besides the faces of celebrities, some brands have adopted a very individual voice or sound. These can be actual voices, such as the infamous Budweiser’s Wassup campaign that was first aired in 1999. (yes really that long ago!) Or the tones used in print advertising, which has become even more important with the rise of social media.

George Clooney is definitely a smooth talker, at least he was in the first ads he did for Nespresso. With time, he has become more self-deprecating and funny, as in the above commercial. As already suggested, perhaps Nestle wants to move its brand image and reputation to appeal (also?) to younger coffee-drinker?

Both Coke and Pepsi use sound to great effect. For Coke, it is the ice being dropped into a glass and then Coke being poured over it. For Pepsi, although it may have started by using the sound of the ring pull releasing the fizzing bubbles from the can, the brand now introduces unknown music performers with their “sound drop” campaign.

Kellogg’s believed that the reason for their success was the sound their cornflakes made when they were being eaten. In fact, they hired a Danish sound lab to recreate the Kellogg’s crunch for inclusion in their advertising. It became so identifiable and uniquely Kellogg’s Cornflakes that the company went on to patent it.

One of their latest developments is the creation of the world’s first light therapy bowl. Although only in prototype form, for now, it is part of a project to help beat SAD. I find this a particularly interesting development, that they are experimenting with adding sight to their already well-known sound.

Unilever’s Magnum is another brand with a distinctive sound. The ice cream is instantly recognised today from the cracking as the model bites into the chocolate coating. This sound is used at the beginning and at the end of the ads; pity the music in between is somewhat irritating, at least to me!

Moving on to the tone of voice on social media, some of the best examples I’ve come across include:

Innocent: Would you be interested in following a Twitter account that posted about natural fruit drinks all day? Probably not, and Innocent Drinks clearly understands that. Instead of simply advertising its juice products, Innocent posts chuckle-inducing, highly relatable content. It comes across as Innocent being just a friend who is always coming out with random, yet spot-on observations of life. Who wouldn’t want to follow them on Twitter for this daily dose of fun? 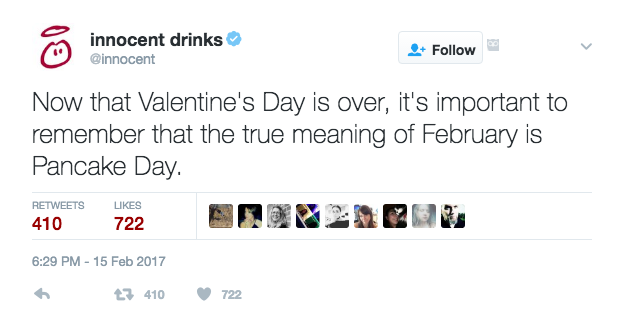 Tiffany: This brand mixes product images with thoughtful commentary such as the example below. It continues its elegant, cool sophistication of its physical presence admirably. It also uses its signature colour in large blocks for instant recognition. 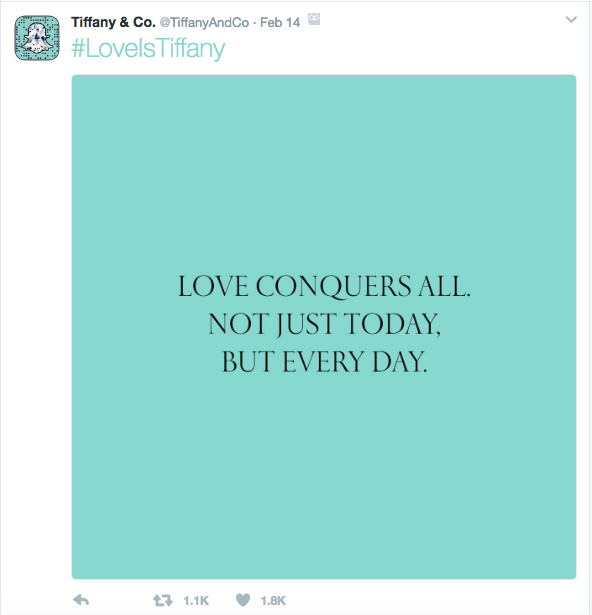 Old Spice: Having been successfully relaunched with its “Man your man could smell like” campaign, which was directed at females, it recently moved to a more irreverent and fun tone which is particularly appealing to younger men. At least that’s what I think because most of their new ads certainly don’t appeal to me! Let me know what I’m missing in the comments, please!

Smell is the only one of the five senses which connects with the right-hand side of the brain. This is where creativity, emotion and hunger are processed, and memories of pleasurable experiences are stored. Therefore smell is the sense which can trigger an impulse reaction.

Branding is about creating an emotional connection with users and therefore aroma is a powerful ally in doing this. There is little logic involved in impulse purchases! For this reason, aroma is being increasingly used to build brand recognition even further. It is a powerful yet subtle way to gain customer loyalty, especially in such industries as retail, hospitality, healthcare, finance or any enclosed environments. You find yourself feeling good in certain places without really knowing why.

Aroma is so powerful, that some brands have been created or relaunched using it as their USP. Think Herbal Essences as one example. It was originally launched as a single shampoo. But in the 1990s it was relaunched using commercials featuring women moaning with pleasure while using the product. The shampoos offered “a totally organic experience” thanks to their unique and luxurious perfumes.

Even if the groaning has gone away, the perfume of the shampoos remains the luxurious spirit of the brand, as shown in this latest commercial.

Other examples which have been launched in the past few years, positioned primarily on aroma, include Jeyes Bloo Foam Aroma and P&G’s Lenor Unstoppables™.

Colour and shape are important elements of recognition. But packaging goes way beyond this today. A pack can become a brand’s signature, whether through its unique form, touch or sound. Yes, a pack can have a sound too – see below.

When thinking shape, Coke obviously springs to mind first, but Toblerone chocolate, Perrier water and Pringles chips also have distinctive packs. Their success can be witnessed by the copy-cat look-alike packs that have been launched by competitors ever since. In some cases even the pack’s colour is similar, making brand identification on-shelf more of a challenge.

Unique forms have also become important in a number of industries as a way of combating market saturation or stagnation. These include cigarettes, candies, condiments and perfumes. In the later, product shape plays a vital role since the bottles are transparent and the majority are colourless too. Luxury can therefore only be suggested through the caps’ materials and the form of it as well as of the bottles.

Shape can also be used as a differentiator in providing additional benefits. Think about the Heinz Ketchup squeeze bottle or the pump dispensers offered on products from cosmetics to liquid hand wash.

Companies are paying more attention to the sound their products’ packaging makes too. There is the well-known clunk of a luxury car door (not sure if we would call it a pack!), but also of the lid closing on a Pantene shampoo bottle. The click of a pen cap or mascara wand when closed are studied and evaluated so that they give just the right sound for associations with luxury or safety.

Branding is becoming ever more challenging with the explosion of products and new product offers being launched each year. Therefore to stand out from the competition, a brand needs more elements to identify its image and personality.

As I have shared, its face, voice, sound, tone, aroma and pack all increase its differentiation and enhance brand recognition. In addition, research shows that stimulating more of a user’s senses significantly increase loyalty. It has been estimated that senses account for 25-30% of a brand’s revenue! So what are you waiting for?

How to Become a MS Teams’ Super User [Quick Tips]

Real Tips for Driving Sales in 2021

Salesforce in Acquistion Talks with Slack – Good News or not?

CX Journey™ Musings: Are Pre-Mortems and Post-Mortems Part of Your Work Plan?