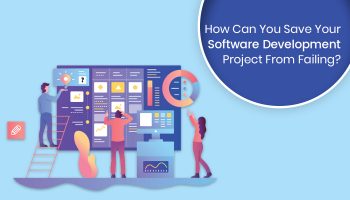 Here’s are some of the tips that can help you save your software development from failing:

Find the Underlying Cause

Team conflicts: A software project is a team effort and it is absolutely normal for team members to argue with each other while working on the project. What isn’t right, however, is the missing of these arguments. Apart from the successful completion of a project, it is the responsibility of a project manager to identify such issues and address them positively. When these issues are handled on time without letting them get severe, the project remains in control.

Reduced interest in the project: Due to one reason or the other, project members and stakeholders can lose interest in projects and as a result, the buy-in of the project decreases. Though if a project has come to this stage, it is hard to retrieve it to a better state as the team members and stakeholders are not in the right mindset. It is the duty of a project manager to look for these problems and communicate with team members as well as the stakeholders to resolve such issues before they become too big.

Once you’ve identified the root cause of the problem, it becomes easy for you to address it. The first step towards doing this is re-evaluating your initial goals. An ideal project manager understands the value of goal setting and knows how to update them as and when needed. When setting a goal for a project, it is important to analyze the timeline and keep the tracking of the goal in order with the budget.

Clearly defined goals align with the team members and give them the purpose of fulfilling the project according to this purpose. If the leader fails in defining the goals of a project, the project is set to doom. If you feel that your project is leading towards failure, rethinking about your initially set goals is a positive step in the right direction. This will help you adjust the project timelines and give your team members the chance for taking the next step in the right direction.

Communication is the Key

When team members share project update status on a regular basis, the chances of errors are lowered and even if someone is going in the wrong direction, they can be corrected at the right time. Communication is not just important among the team members but also amongst the client and the custom software development company. Staying proactive while communicating about the project can reduce the wastage of time and the risk of failure.

Pointing fingers at other team members is one of the most popular habits when an issue about project failure is raised. It is extremely important for the team members to analyze their own mistakes and work on improving them. This can only happen if the overall team spirit is healthy. Project members and team leaders should encourage positive feedback and shouldn’t criticize any single person even if the project is heading towards failing.

Instead, they should talk to individual team members and understand their point of view. This might reveal a lot of issues that do not appear on the surface. Such insights can help you redefine your project goals and allow your team members to be honest and confident.

Fix on the Basis of Priority

When a project manager works towards fixing a project, many issues can turn out to be overwhelming. However, being an ideal project manager in a custom software development company, you must know your fixing priorities.

Once you’ve identified the project issues, both direct and indirect, you should work on prioritizing them first. This way, the troubled project will have the chance to recover sooner. You can also define a new timeline of the project after this assessment. Issues that have a chance of posing a negative impact on the project should be eliminated initially. Tasks that can help you work towards the project scope should be your first pick as they’ll lead to early recovery.

Other than defining the priority, it is also important for you to keep a track of the assigned tasks and the team members responsible for working on them. From assigning tasks to managing status updates to removing the project and team issues, your role in bringing back an almost lost project can make a huge difference.

Making amends in a troubled IT project might seem challenging but it can be done by taking appropriate solutions and steps before it is too late. If you and your team can find the issues and fix them according to priority without conflicts, the project can come back on the right track.