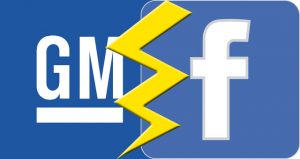 The twittersphere erupted with news of GM’s announcement that it was refusing to pay for 2013 Super Bowl advertisements and $10 Million worth of advertising on Facebook.

Much of the popular press and self-proclaimed social media experts are jumping on the bandwagon and calling GM “idiots” for ending their advertising of Facebook and talking about how GM “doesn’t get” social media. If you listen to the amount of noise out there you would think that there was consensus that GM was wrong in making these moves.

I disagree. GM is making the right move.

Companies need to re-think how they spend money on marketing and advertising to make money in the showroom. Traditional advertising is becoming more expensive all the time and as the saying goes “I know I’m wasting half of the money I spend on advertising, only I don’t know which half.” The key here is that with advertising you pay to blast everyone that sees it with a single message – including people who just bought what you sell and those who will never buy what you sell just to hit the people who are considering a purchase of what you sell. As a result it is expensive and nearly impossible to place the right message with the right people at the time (and only those people). So I am not surprised at all that GM is re-evaluating its advertising spend, possibly investing more (not less) in the future in social media. Done well, you can be more impactful with pull marketing and social media than you can with push marketing and advertising.

Wait a minute, did the same company that doesn’t “get social media” launch an app built by hometown company – Detroit Labs – before Super Bowl 2012 that rocketed into the Top 10 free apps for the iPhone on Apple’s App Store (a top 10 that included Facebook and Instagram)?

“For all intents and purposes, all of the expectations that we had and that GM had were far exceeded… in a positive way!”

First let’s be clear. Social networks and social media are two separate things, but people talk about them as is if they were one thing.

Now, I must disclose that I specialize in helping companies creating b2b pull marketing strategies to drive an increase in inbound sales leads by researching the customer purchasing journey online and then helping them attract and engage customers, partners, or employees by placing the right content in the right places at the right time. Part of this is achieved by using my proprietary single content input, multiple content output methodology and yes, that sometimes includes using social media. But social media is a tool not a religion, and it needs to be used only when appropriate.

I think GM made the right call in ceasing to advertise on the Super Bowl and Facebook and here’s why:

1. Super Bowl advertisements are expensive and for GM much of the cost is allocated against people who will probably NEVER buy a GM car

3. Their Chevy Game Time App experience should have given GM an idea that next year they can drive huge engagement during the Super Bowl (without advertising)

If GM is so clueless at social media, then why does the Facebook page for Chevrolet look so much better than the Facebook page for Ford or Toyota or Dodge. Honda is the only one I looked at amongst the car companies that had a more social feel at first glance, oh and Honda has the most likes of these companies too – go figure. But the engagement of people on Facebook around these brands is tiny in comparison to BMW, Mercedes-Benz, and Harley-Davidson – both in terms of the numbers of likes and the number of people talking about them.

So, yes GM still has things to learn about engaging on social media (and about building better products too), but then so does every company. Social media and pull marketing are two new tools in the toolbox for every CMO, brand manager, and product marketer, but as long as we all continue to instrument for learning, as marketers we will continue to get better at utilizing these new tools to attract, engage, and retain the people who will love our products and services as much as we do.

The Importance of Software Testing in Production Industry

Top Three Customer Experience Metrics to Measure for your Business

From a Good to a Great Website: 9 Ways to Engage More Successfully