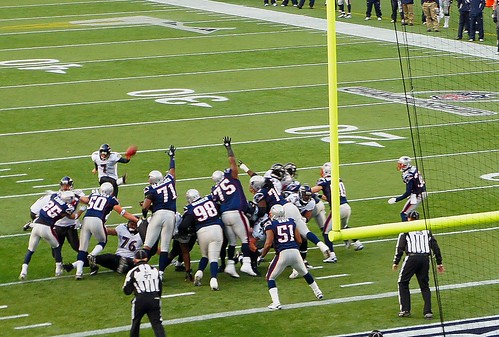 A dropped ball and a missed kick led to death threats. Last week during the title matches that produce the participants for the Big Game in American football, two players suffered season-ending miscues. As a result, two teams went on vacation. Those with a stake in the outcomes were devastated, and a tiny fraction displayed their contempt in a seriously anti-social manner. With so much at stake and such great visibility, it is not a big surprise that these high-profile bungles received so much attention.

So my question is, what happens when your sales guys fumble? My guess is that they don’t get death threats if they drop the ball on an opportunity. I am fairly confident that most dropped balls go unobserved.

I don’t think it is unfair to compare your sales team to a football team. The selling process is often discussed in sports metaphors, particularly hunting – the thrill of the chase, and all that. In fact, it would be pretty interesting if sales SVPs could pick their fantasy sales team and compete with each other on a weekly fantasy forecast.

But, getting back to botched plays, it would be great if sales reps were monitored with as much visibility as football players. In fact, the concept of Moneyball, borrowed from the statistical analysis performed by some baseball teams, makes even more sense when it comes to sales as a sport. It would improve overall sales performance if we could track more information about sales activity and compare that to results. We don’t need to see the sales rep up on the Jumbotron in slow motion replay, but it would be better if we knew more about what happens along the way.

All of this gives us a better chance to coach, another sports metaphor. When a sales rep does make a misstep, it is best to know what went wrong, and what will make it right next time. It is much harder to self-correct than it is for a sales manager and a sales rep to work as a team to make improvements. This is why teams review game video footage – the equivalent of tracking sales activities by opportunity stage and discussing once or twice a month.

What we need is more visibility into fumbles, but what we don’t need, however, are death threats.