Summary: One way to understand consolidation and competitive trends affecting marketing software is to look at systems across several dimensions: how closely they relate to customers; whether they are operational or analytical; and whether they support online or offline activities. Combining these provides interesting insights into who competes with whom and what they’re likely to do next.

On Wednesday, IBM announced formal completion of its acquisition of Unica. On Thursday, the New York Times reported speculation that Microsoft could buy Adobe.

But from my admittedly marketing-centric view of the world, Microsoft / Adobe makes more sense than one might think, as did IBM / Unica. Here’s how I think of things:

The next circle holds marketing applications, which deal with both identified and unidentified prospects. The circle surrounding that holds CRM systems, which deal with identified customers as well as prospects. Surrounding that are ERM systems, which encompass both customer-facing and back-office applications. You can further extend the model by adding a circle for software platforms (operating systems and databases) and another for hardware. 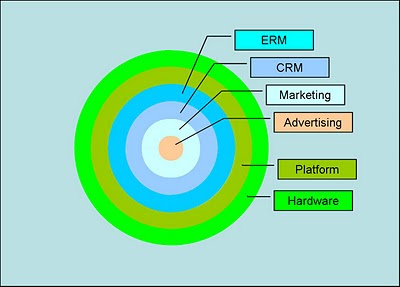 Each larger circle can include the functions within the smaller circles. Thus, a marketing automation system like Unica or Aprimo includes advertising management; CRM systems like Salesforce.com provide marketing automation; and ERM suites like SAP and Oracle include CRM. Operating systems, databases and hardware support them all. In practice, the specialists in each field tend to be better than components of the larger surrounding suites: this is the essence of a “best of breed” strategy.

So far so good. But a system’s relation to customers is just one dimension. Systems can also be classified functionally as operational or analytical, and as dealing with online or offline activities. If you combine those in a two by two matrix, this results in four classes of systems, which correspond nicely to real-world products: online operations (Web site management and ecommerce), online analysis (Web analytics), offline operations (traditional ERM systems) and offline analysis (business intelligence). 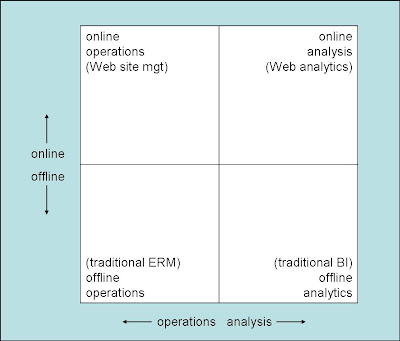 Things get really interesting (to me, at least) when you combine these two models. A complete solution for any application includes all four of the matrix quadrants: operations, analytics, online and offline components. So the application’s “doughnut” extends through each quadrant. 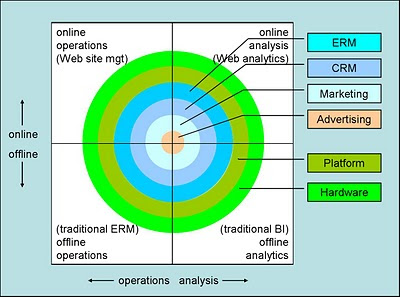 The other way to look at this is to treat all systems within each quadrant as a unit. Keeping with our junk food theme, let’s call those pizza slices. 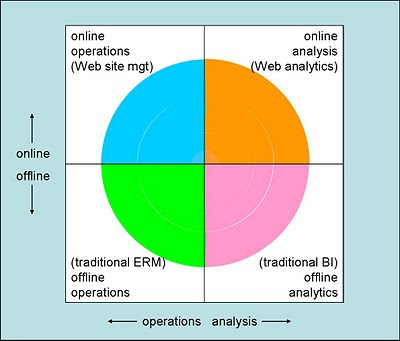 I find the combination of doughnuts and pizza slices a useful way to think about the relationships among industry vendors. Functional systems tend to start out as pizza slices: general solutions that cut across all applications within their quadrant. Applications typically start out as doughnut quarters: that is, specialists within a single quadrant, usually operations. For example, CRM systems started out mostly as offline operational solutions for call centers and sales automation; marketing automation began largely as campaign management for offline contacts by direct mail and telemarketing.

What makes IBM / Unica so interesting is that IBM has been buying pizza slices (CoreMetrics, Sterling Commerce, Cognos, SPSS) while Unica is a doughnut. The combination is tough to digest. Do you slice up Unica’s various components and reassign them to the Web operations, Web analytics and business intelligence units? Or do you keep the doughnut together and enrich it with parts of the other products? What happens to that little offline operations slice (direct mail, call center, etc.)? And do you fill in the center (advertising support) with something more substantial?

Adobe started as a specialized application for offline operations (printing), which would make it a thin pizza slice. It has grown by thickening its offline features and, more recently, by expanding into adjacent slices: online operations and, with the Omniture acquisition, online analytics. It has also narrowed its focus towards the center of the pizza, on the marketing and advertising doughnuts.

This narrowed focus is what makes Adobe an interesting partner for Microsoft. Microsoft doesn’t have much the Web analytics slice and would like to strengthen its position in the marketing and advertising doughnuts. The blogger who called the Microsoft rumor “nonsense” suggested that Google is a more likely partner, basically as an anti-Apple move. That makes some sense, but Google already lives in the online marketing and advertising slice, so Adobe would just thicken their presence. Google would like to complete the offline portions of its marketing and advertising doughnuts, but Adobe doesn’t help much there. And I don’t think Google has much interest in moving into Adobe’s other slices.

The “junk food chart” offers quite a few other insights. One is the opportunity for many marketing automation vendors to grow by adding more advertising support — a major weakness in most products. Another is the likelihood that Web site vendors and Web analytics vendors will themselves push more actively into marketing automation. A third would be the challenge that big online vendors will face in growing if they don’t more into offline operations like CRM. You can also plot individual companies on the chart to see how they stack up against competitors both within and outside their existing markets. It’s interesting stuff and a great way to work up an appetite.

Has COVID triggered a shift away from traditional PR agency retainer fees? How to...

Millennials, Technology, and a the Need for a People-Centric Approach

Have it Your Way! Can Design Thinking Help Improve the Restaurant Customer Experience?