Back in January of 2011 I released the figures from a poll which asked users a simple question; Do you get business from social networking? The figures were interesting. The biggest category was those who would like to get business from social networking but had not some 43% of all respondents. At the beginning of this year I thought it would be the right time to see what if anything had changed. Like my 2011 survey I put it out through a number of social networking channels, including my blog, a survey on Linked In in some of the bigger groups in which I was a member, and I regularly asked for responses via Twitter and Facebook updates. I’ve ended up with a similar number of responses about 200 which in itself is interesting as my own social media footprint is substantially larger now than it was in 2011 when I first ran it. 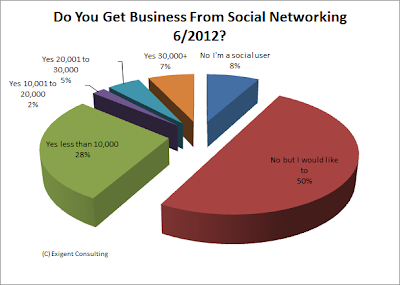 What struck me was how similar the results were only now it seems its even harder to make Social Networking pay with 50% of respondents saying that “no they had not yet got any business from social networking although they would like to do so”. 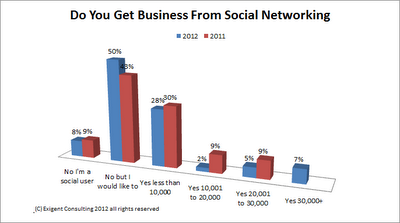 It seems that even the must use channels take a lot more effort and a lot more time than people realise to generate business. I recognise that the sample is small and potentially unreliable. I would argue that, if anything, my results are biased toward the social media world because that was the community into which I put the survey.

Let me have your comments.