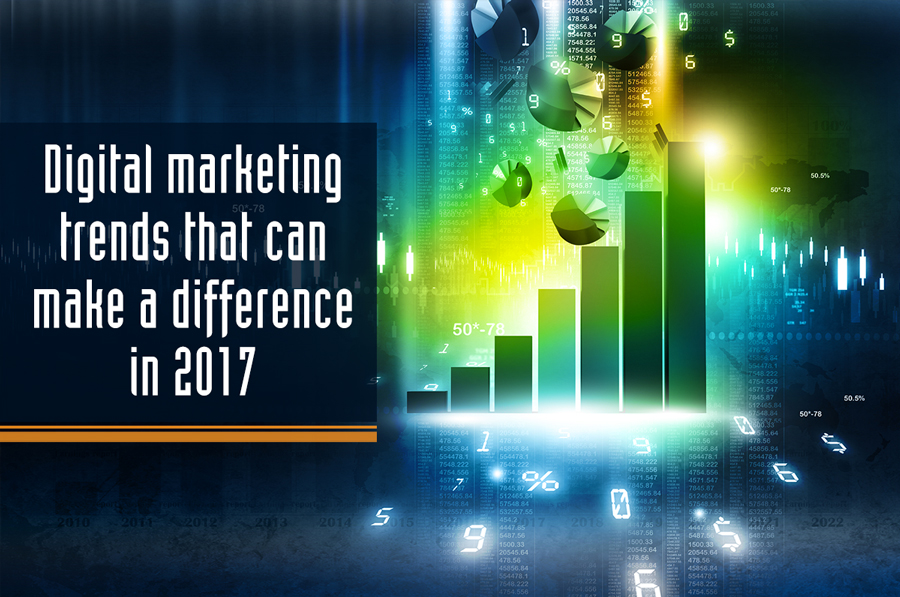 The digital world has many new and upcoming trends to offer in 2017. All the marketers may be wondering and imagining the changes that would topple the ways in which things are executed today. Yes, it’s indeed so. The trends are of course foreseeable as in the last few years we have seen quite a number of new devices like Apple Watch, Moto 360, and Google Glass being launched. The mobile phones are getting even more sophisticated and the newer apps are being launched every single day.

With all these changes, it’s inevitable that the year 2017 would see more wearable devices and change in wearable technology that may change the entire way local marketing is being carried on. It might be that the digital marketers have to focus on tapping the potential of the wearable technology which can bring a huge change in the way digital marketing is seen today. Content marketing is another field that’s surely going to go through a sea change. Social media is yet another vertical that is evolving at a higher pace.

There is no doubt that the digital space is going to expand with more companies entering the field stiffening the competition. The other viewpoint is, with the data revolution increasing its volume and speed, the search engines would sort and give preference to the huge amount of data available on the internet for easing the search operations. Thus as far as we can see, the whole ecosystem of the marketable digital space is going to expand and evolve.

With so many foreseeable trends, you may wonder what’s going to happen and in which direction the digital world is advancing. This is a question that intrigues many, standing at the crossroads of innovation and change, at all the frontiers of technology and practice. Whatever may be the case it is indeed true, the digital marketing space is huge, complex, and is becoming increasingly volatile. Change and innovation are the order of the day and in this evolution of a constantly changing ecosystem the sooner you are able to strike the right chord of the internet user, the more marketable the company and its products would be. This would enable any company to stay ahead of the competitors.

The email marketing trends in 2017 would see the shorter body of the emails, context driven messaging, and the tone of the emails would be more conversational. Emails may be complemented by chatbots. Heat map studies would be more in vogue that enables the understanding of users’ habit patterns and which subject lines, users are focusing on.

More of email automation would be used with the machines matching the subscribers with content. This would also encourage cross-channel data to be leveraged even more with increased adoption of lead scoring data. With the emails getting shorter with more attention-grabbing subject lines and more contextual content, the call-to-action would be more clear and compelling. Thus, staying relevant is where the challenge would lie. It is already a fact that the emails are viewed more on mobile phones and thus they would be compatible with the devices used depending on the usage of the target segment.

SEO is an ever-evolving field as the search engine algorithm is improving with newer changes in the way things used to happen earlier. In this context, the usage of the schema as a markup is gradually stealing the show with the changes in the Google algorithm along with the users’ trends. Use of schema makes it comparatively easier for the search engines to assess your website which increases the probability of being shown up with any query.

The tendency of Google is to improve the ways in facilitating the users with what they want through their query. As Google’s algorithm and search pattern change as it has, through 2016, usage of the schema is bound to increase in 2017. Google has been observed to use more of Quick Answers that has grown from 22% from the end of December 2014 to over 40% at the beginning of 2016. Schema helps in making the context and purpose of the website clear to Google so that the content is clearer for the snippet boxes to understand.

The discussion about SEO trends would not be complete without talking about the introduction of RankBrain, artificial intelligence, and machine learning by Google. Google’s RankBrain is more into understanding the context of a word being searched and this, of course, has a bearing on the search engine ranking. The digital marketers in 2017 cannot ignore the machine learning aspect of Google anymore which has evolved to be the one of most important factor for ranking.

There is no denying the fact that the organic digital marketing eco-space is constantly expanding and getting more complex. The blog content, user-generated content, and social media contents are all evaluated and taken into account in deciding the rankings. In this context, it is essential to mention that not only Google but Bing and the social media giants like Facebook’s algorithm would also go through a marked change in the coming year.

The last few of years have witnessed a phenomenal growth in the digital marketing efforts by the organizations worldwide. It is quite obvious that the competition would increase for online space with more companies joining the spree of digital marketing. This would inevitably increase the demand for the top advertising spaces surging the prices for online advertising. An opinion still persists which says that pay per click (PPC) advertising would die in the coming years. If it really does there would be more alternatives of optimized advertisements ruling the web in the ensuing years.

Mobile optimization is another trend that would prevail as Google has virtually phased out the websites which are not mobile friendly. The year 2016 was a year that witnessed the phenomenal use of mobile phones and these handheld devices outmoded the usage of the desktop. Along with it, the desktop traffic has been substituted with mobile phone traffic which suggests marketers would be more mobile-focused in their efforts of internet marketing. Search from mobile phones and optimization would thus be a top most priority in 2017.

The connection between like-minded people through social media has been rising at a meteoric pace in the last decade. Today, people of different countries and continents are connected than ever before through social media. The brands are increasingly plunging into social media to increase reach with diverse content types like infographics, video, and articles with the intention of bringing together the prospective customers and converting them.

One of the recent trends that would increase in 2017 is making the employees turn into brand ambassadors on social media. According to Pardot’s estimates, there has been 191% growth in employee advocacy on social media from 2013. In the same survey, 45% of the respondents named employee advocacy as the top external objective of organizations. This trend is estimated to increase in 2017.

Client support programs through social media are supposed to grow as more brands are using social media and are coming up with social teams to answer the questions and resolve customers’ issues while on the go and in real time. Social listening and use of social media for conversion are the trends that are going to rise with the social media analytics, becoming even more comprehensive and easier to use.

The power of social media would be used more effectively by the business community and the marketers in 2017. This would include the attempts to use social media as a conversion channel and convert the prospects to buyers directly.

The good news of course is, the internet users are on the rise and it would increase even more in 2017. According to a research study, $2.2 trillion of retail sales was influenced by the internet in 2015. The same study predicted that 2017 would be marked by more web traffic than all the combined prior internet years. By 2017, 68% of all the internet traffic would be generated by mobile phones and connected devices. The social media population is also growing and 2017 would ensure more traffic on social networks. This would certainly give ample space for marketers to market their products and services.