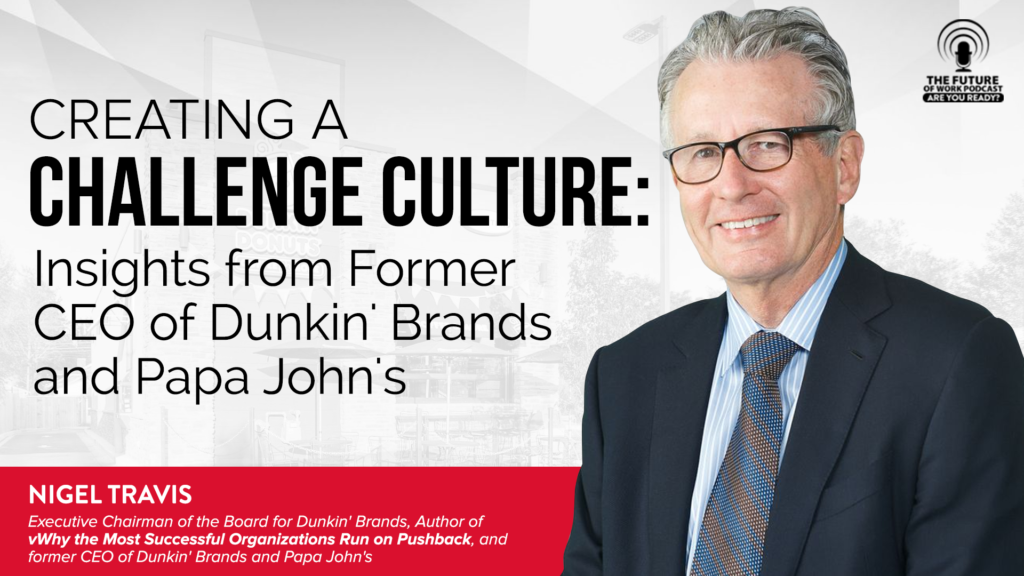 Previously, Nigel served as President & CEO of Papa John’s, the pizza chain with annual system-wide sales of $2.1 billion and more than 3,300 restaurants throughout the U.S. and 29 international markets. During his four-year tenure with the company, Papa John’s online sales tripled through the innovative use of technology.

Prior to Papa John’s, Nigel served as the President and COO at Blockbuster, Inc. During that time, global sales increased over 50 percent and the international business was developed to encompass 26 countries with revenues of $1.8 billion. Nigel also built a worldwide franchise network of 300 franchisees in 15 countries with revenues of approximately $1 billion, and transitioned the company from a video rental store chain to a complete movie and game source. Nigel has also worked for Burger King, Exxon, Kraft Foods, Rolls Royce and Parker Hannifin.

Nigel’s new book will be coming out on September 18th and it is titled, “The Challenge Culture: Why the Most Successful Organizations Run on Pushback”

Why a pushback culture?

Nigel says, “Pushback gives you more views, often different perspectives, builds greater engagement and probably alignment within the organization.”
This culture gets the best from incorporating peoples’ thoughts. You get the best solutions. This is the way to get people to truly by-in to a project.

Why is it hard to get pushback culture going?

1. The approach is anti-hierarchical. People spend time to get to senior positions and once they get there they have a feeling of, ‘I am in charge’. They are often reluctant to give up power and control
2. People are too lazy – it’s easier give orders than cultivate this pushback culture

How do you create a challenge culture?
1. Start modeling it yourself
2. It is not something to plug in, it takes time and patience
3. Go in and ask questions – in positive way
4. Drop in to discuss the book, idea, etc.
5. Don’t go too fast; do not be too overt about it (unless you are the CEO)

Nigel’s advice for employees:
1. Be civil and don’t attack
2. Use open-ended questions
– Can we do it better?
– Ask – would you be interested in hearing what I am thinking?

● What is pushback and why is it important?
● Nigel’s experience at Kraft Foods, Rolls-Royce, Parker Hannifin, Papa John’s, Dunkin’ Brands and Blockbuster
● A look at Blockbuster’s demise and how they could have avoided it
● Nigel’s biggest triumph and misstep
● How company cultures in Europe differ from the United States

Link from the episode: