As a preamble to a discussion about failing consciously, I’d like to retell a story. Many years ago Xerox was beta testing a then new-type digital printer. The testers sent back complaints: it was hard to figure out how to work the damn thing, and the user guide was confusing. Obviously, User Error, the designers concluded. Yup. More stupid users. So an internal focus group was set up by senior management to test what exactly was happening.

They brought in three middle managers, put them in a room with the new printer and user guide, and from the one-way mirror watched while mayhem ensued. They watched while the managers got confused by the directions in the user guide, spent literally hours arguing amongst themselves about what the user guide meant, kept pressing the wrong buttons, and finally gave up – never getting it to work.

User Error, they again said. Obviously, went the thinking, the managers weren’t smart or savvy enough to understand simple directions. Except they didn’t know a trick had been played on them: the testers were actually PhD computer scientists. Oops. It wasn’t User Error at all. They had failed to design a machine and a user guide that had clear user interfaces. So while the printer itself might have been a marvel of machinery for its day, it couldn’t be used. It was a failure. Or was it?

I contend that until every ‘failed’ step was taken, and every ‘failed’ assumption made, there was no way to know exactly what problems needed to be fixed or if indeed their printer was a success. The failure was part of the march to success.

We call it failure when we don’t achieve a goal we’ve set out to accomplish, whether it’s starting up a company, reaching a job goal, learning something new, or starting a new diet. I think that as humans we strive to succeed, to be seen as competent, to be ‘better than’, even if we’re only in competition with ourselves. It’s natural to want our products, our teams, our families, our competitive activities, to reap success. To be The Best. And we plot and envision how to make it happen.

But the road to success isn’t straight; sometimes we face disappointment, shame, and self-judgment along the route. We get annoyed with ourselves when results don’t seem to comply with our mental images, and tell ourselves maybe we didn’t follow the original plan, or didn’t plan well enough, or maybe we’re self-sabotaging. We blame teammates or vendors, spouses or neighbors.

I’m here to tell you that failure is a necessary part of success. It’s built in to learning and succeeding, actually a natural part of the process of change and accomplishment. Before we win we gotta fail. Tiger Woods didn’t wake up the best in the world. Neither did Pavarotti or Steve Jobs. For anyone to get to the top, to achieve success in any industry, any endeavor, any sport, it’s necessary to fail over and over. How surprising that no one teaches us how to fail consciously. I suggest we develop conscious failing strategies that become built in to our success procedures.

WHAT IS OUR STATUS QUO? AND WHY IS IT SO STUBBORN?

Change – and all success and failure is really a form of changing our status quo – has a very large unconscious component, and when you only try to add new behaviors you miss the unconscious elements that will rear their ugly heads as you move toward hitting your goals: you can’t change a behavior by trying to change a behavior. It just doesn’t work that way.

Let me explain a few things about how your brain works in the area of change. Anything new you want to do, anything new that requires, ultimately, new behaviors, or added beliefs or life changes, requires buy-in from what already exists in your make up – your status quo. Indeed, as the repository of your history, values, and norms, your status quo won’t change a thing without congruency. Indeed it will reject anything new, regardless of how necessary it is, unless the new has been properly vetted.

Setting a goal that’s behavior-based without incorporating steps for buy in assures resistance. Sure, we lay out the trajectory, attempt to make one good decision at a time, and use every feeling, hope, data point, guess, to take next steps. But when we don’t take into account the way our brains unconsciously process, it may not turn out like we envision. Lucky there’s a way to manage our activities to take into account what a brain needs for congruent change and a successful outcome.

THE STEPS TO FAILING CONSCIOUSLY

In my work on how brains facilitate change and make decisions to shift what’s already there (my The How of Change program teaches how to generate new neural routes) I offer ways to create new synapses and neural pathways that lead to new behaviors. Take a look at the Change Model chart I developed, with a careful look at The Trial Loop: 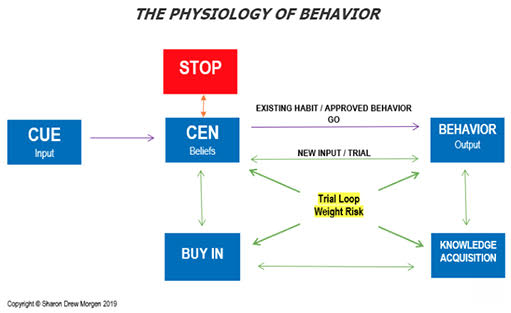 When developing the Change Model, it became important to me to diagram how we learn and developed The Trial Loop to explain it.

The Trial Loop is where the brain learning occurs. It’s here we iterate through several touch points: new data acquisition, buy-in, trial behaviors, and the stop/go/stop action (double-arrowed line between Beliefs (CEN) and red Stop) as each new element is tried and considered before new behaviors are formed.

So as we try out new stuff, our personal mental models of rules, beliefs, norms, history, etc., go through iterations of acceptance, rejection, acceptance, rejection, etc. until the new is congruent with the norms of the system, something we cannot know before we go through this process. So let’s call our disappointments all part of the iteration process that precedes success. Here is a closer look at my chart:

Now you know the steps to conscious change. Should you want to learn more talk with me about my How of Change program let me know.

THE STEPS TO CONSCIOUS FAILING

Now let’s plot out the steps to conscious failure to avoid large-scale malfunction. To begin with, write down components and sub-outcomes for each stage of the route between input (start of the initiative or goal) and final outcome; examine each stage and resistance point against this; examine what’s not doing what was expected through time; come up with new choices to try, and run through the Trial Loop again; then ultimately create steps to ensure the new is integrated and on track to become a new behavior. Success!

The Beginning: to start the process toward succeeding at a goal, you need:

The Middle: to make changes, add new knowledge to trial, get continuous buy in, you need:

The End: making sure the outcome is congruent with the original goal:

Here are more specifics to help you integrate the necessary failure, and avoid guesswork and reactions to what might seem inconsistent with your goals:

Of course there’s no way to know before you start what any specific stage will look like. But using the steps, the thinking, above, you’ll be able to get a handle on it. And by including the failure, you’ll have a far better chance of succeeding.

For some reason, as leaders or individuals, companies or small businesses, we shame ourselves when we don’t achieve what we set out to achieve during our change processes. I contend we must think of each step as an integral part of the process of getting where we want to be. As they say in NLP, there’s no failure, only feedback.

5 Ways to Listen to What Your Customers Have to Say

How Customers are Coping in Difficult Times, and How Your Brand Should Respond

What are Online Offline Experiences?