I want to say from the start that I’m no SEO specialist or Social Media Guru. I’m a business consultant specialising in supporting High Growth Businesses. I am a bit of a pioneer, joined Twitter in Dec 2008 and Linked In even earlier I cant remember exactly but it seems like I’ve been on it forever. So I do like to try out new ideas to see how they might help me develop my business by getting more leads or by helping improve my service to my clients.

I have just started with a new piece of coach management software from Adeptio and whilst talking with them we decided to set up a campaign to get new inbound leads. I already had some content on sales and business forecasting and we decided to use the idea of promoting a free e-book or report as a way of identifying potentially interested parties, you can click on the link to see the landing page. Initially we set up a single campaign with Linked In. Unfortunately that bombed, so I dusted myself down and decided to take it a bit more seriously and create two more targeted ads for Linked In and an advert  in Twitter. They were both essentially the same advert they both went to identical landing pages although they were separate URL’s so we could identify the source of conversions.

Creating a Linked In Advert

You have space for an image and and advert with 25 character headline and a 75 character body. So it looks like this
I undertook two campaigns one for Accountants and one for IT community. For each campaign we produced a number of ad variants to try to find which was the most successful. We had at least 5 variants in each campaign. There are a wide variety of criteria you can use to target you ads including age, geography, job title, industry, individual company name and Linked In Group Name to mention a few.

The twitter interface is much different with a 140 characters for a tweet, an image, a URL and a limited selection of calls to action. You can chose by location as they call it , language, category, device and gender. The twitter advert looks like this. 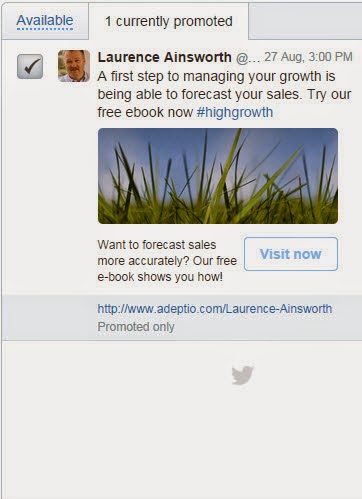 What I Have Learned

LinkedIn have a great deal more variables to play with which gives you a lot of options but makes it much more time consuming to create an advert. The ability to target groups is helpful but you need to have a good knowledge of which groups are appropriate to your marketing. This means spending a deal of time researching potentially relevant groups. Just using keywords to find them hasn’t, for me, delivered the desired results. Also I’ve found the limitations of 75 characters in the descriptor section as very restrictive and in many cases I was 2-5 characters over. I struggled to communicate what I wanted in such a small space. 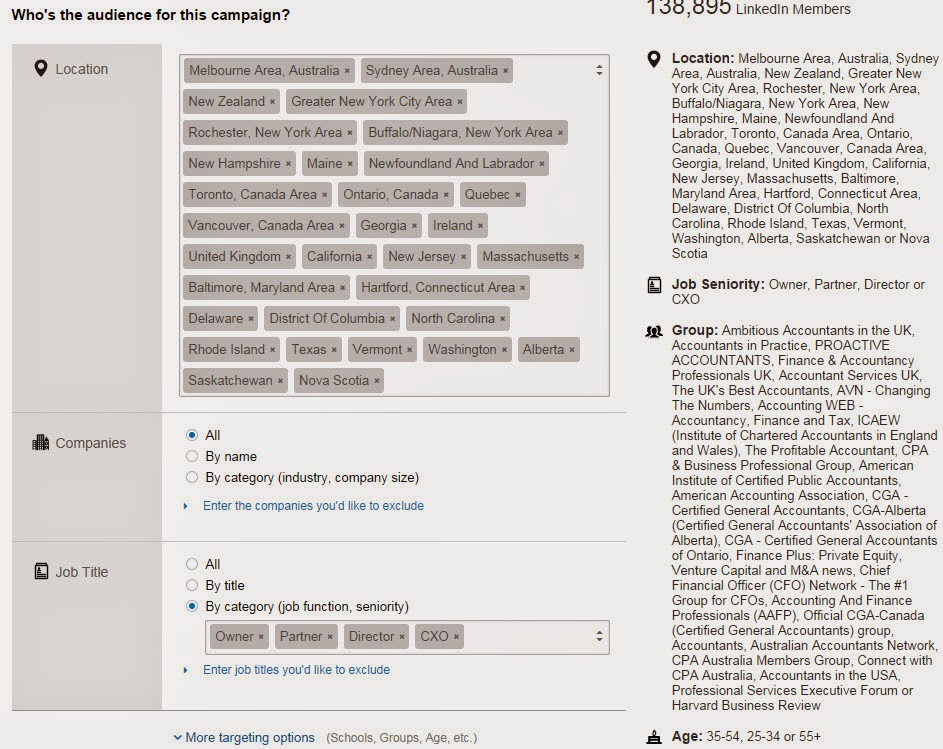 Your advert needs to perform immediately. LinkedIn serves up your advert a lot initially but if it fails to make an impact it will serve it up less and less so you get less response creating a bit of a self fulfilling prophecy. You can see below how Linked In reduces the amount of impressions pretty rapidly making it difficult if not impossible for a slow burn to succeed because its simply not shown.

Twitter by contrast takes a different view and will persist with impressions allowing your Ad to build momentum.

And engagements have risen accordingly.

To create or maintain a campaigns success in LI there is a lot of tinkering about with the variables to try to improve performance. For businesses without a dedicated marketing person it is a significant issue. As LinkedIn effectively kills off slow campaigns and rather than keep tinkering it’s better to cancel the original campaign and start a new one. This creates even more of an overhead. The value in having more than 1 advert is you can quickly see which are the most effective and shut down those that aren’t so you don’t waste valuable impressions.
Twitter has a much simpler user interface but if you’re outside the USA then effectively you’ve only got a country based selection since other than London it didn’t recognise any other UK city. The image was also a bit of a problem  as it needs to be 800 x 320 minimum which is pretty big most of my pictures weren’t the right size. It’s also one reason why I ended up with only 1 Twitter advert.

In a nutshell, LinkedIn has not been a success both in terms of click throughs’ themselves and the amount of effort required to keep adjusting components to a campaign going. At this point it’s in danger of being put into the “too hard” basket.
Twitter, well  I’m much happier with the results. After a shaky start the advert has started to perform, this won’t happen with LI as anything that does have immediate impact gets killed off through an ever decreasing daily impression count. The click through rate isn’t fantastic by any means but it’s certainly good enough for me to continue with it. In addition I get a number of side benefits from the Twitter campaign like retweets, and building engaged followers. Engagements is a much broader category and doesn’t just refer to campaign click throughs’ to my landing page to quote Twitter it includes  ” …  clicks to links, the Website Card, favorites, hashtags, embedded media, your profile and other Tweet details in your ad. This includes clicks you are not billed for.”
I do recognise that this is not a scientific comparison but I do reflect a typical smaller business who may want to use paid promotion to create leads for their business. I think therefore that my findings may offer useful pointers to others who are looking to do the same.
So I’m definitely going to continue with Twitter. As for linked In I’ll continue to persevere to see if I can find a better way of creating ads.