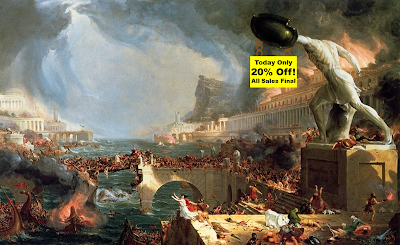 Political situations come and go but trust is the foundation of civilization itself. So I was genuinely shaken to see a report from the Edelman PR agency that trust in U.S. institutions fell last year by a huge margin – 17% for the general public and 34% for the “informed public,” placing us dead last among 27 countries. All four measured institutions (business, media, government, and non-governmental organizations) took similar hits, although government fell the most. 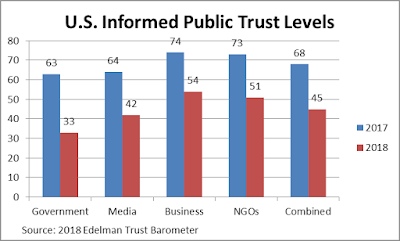 You won’t be surprised to learn that concerns about fake news and social media are especially prominent. What’s more surprising is that trust in traditional journalism actually increased in the U.S. The over-all decline in media trust resulted from falling confidence in news from search engines and social media. Similarly, world-wide trust increased in traditional authorities such as technical, academic, and business experts.  So there are rays of hope.

Digging deeper, the sharp fall in U.S. trust levels follows two years when levels were exceptionally high. The current U.S. trust level is roughly the same as the four reports before that. Maybe don’t head for that doomsday cabin quite yet.

Still, other reports also show tremendous doubts about basic questions of truth. A Brand Intelligence study comparing brand attitudes of Democrats vs. Republicans found that eight of top 10 most polarizing brands were news outlets. World-wide, 59% of people told Edelman they were simply not sure what is true and just 36% felt the media were doing a good job of guarding information quality.

The social implications of all this are sadly obvious.  But this blog is about marketing. How can marketers adapt and thrive in a trust-challenged, politically-polarized world?

So there you have it. Assuming we avoid complete social collapse, marketing in today’s polarized, anxiety-ridden world poses unprecedented challenges. Ironically, the loss of trust is happening at the precise moment when physical products are being replaced by trust-based services such as subscriptions and automated recommendations. The stakes couldn’t be higher.  Choose carefully and good luck.

Why CRM Is Key To Boost Business Growth Potential?

Post-COVID-19 The Growing Importance Of Being Your Employees’ Caretaker

6 Ways to Keep Your Patient Calm During a Dental Procedure