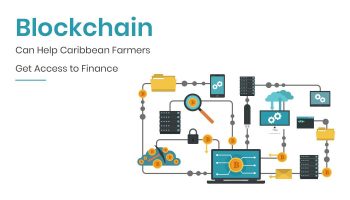 Although the agricultural business has changed a lot in recent years, it’s still faced with some of the biggest challenges. For instance, the supply chain has been faced with inefficient, non-transparent, and no communicating network. It’s believed that the lack of adequate financing is one of the biggest barriers that prevent young people from becoming farmers. But thanks to blockchain technology, this problem can easily be solved. Since financial institutions still depend on labor-intensive and huge collaterals to evaluate or process loan applications, most young farmers have found it challenging accessing the loans.

Plus, a large volume of farming activities is done using money. This adds to the difficulty of getting any loans from the institutions. By providing a stronger way of storing and sharing information, blockchain technology can significantly change this. For the first time, the technology can be used to empower farmers and encourage them just to continue doing what they are doing, which is farming. Blockchain technology will significantly reduce the need for using paperwork by recording all the transactions done by the farmers on their behalf. It will also use a decentralized ledger system to ensure that the information kept is private and safe.

So, what exactly do we mean by blockchain? While blockchain is a version of what we traditionally know as a database, it comes with some additional benefits. It’s described as a highly immutable distributed ledger. Although farmers can continue to use cash and operate the way they want and still qualify for loans because of blockchain, the technology is used to relieve the farmers of the burden of having to do some recording using to access capital. Farmers can now be validated using the transactions that they conduct regularly and the strength of their business networks.

Some blockchain farms have come up with a new method of calculating credit score while liaising with companies that farmers do business with. They normally asses the farmer’s creditworthiness by analyzing transactions from fertilizer and seed and more importantly, the other companies such as manufacturers, supermarkets and hotels that farmers supply with their products. These blockchain companies make their money by selling the credit checks to lenders who previously had few ways of assessing underbanked and unbanked loan applicants. There are several farmers out there who are not only productive but can also work even harder if they have access to the funds that they need. So, the business of the blockchain companies is to identify who the framers are while keeping sensitive personal and company information secure and private at all times.

This idea began taking shape at blockchain hackathon that was held in 2017 in Jamaica. Sponsored by IBM and NCB, a large Jamaican bank, the company has since put together a full proof concept around the data and credit scoring algorithm based on a tool that was developed by the Agricultural Loan Evaluation System and Frankfurt School of finance. This has now given the companies the confidence to run a pilot project through their platform. The blockchain developer in India is currently looking for funds that they can use for their pilot project where they intend to empower the farmers to enable them to expand their productivity to meet that strong demand that has been identified in the market.

By investing more money, they will be able to include more farmers even as they roll out more services to them and other interested people. One of the strongest references that they’ll be using is the information derived from the purchases of farm produce. This is because these purchases have very important information about the farmers that can help them to identify who among them are strong performers who can then benefit from the pilot project. Although it’s still early, they are looking forward to using Caribbean and Jamaican as test countries so that later on they can be able to provide the service to the whole world.

Dedicated blockchain developer will also offer an open platform for both the buyers and the suppliers to negotiate on reasonable prices for their goods. Thanks to blockchain, suppliers can then pay the farmers directly using their mobile phones. This will significantly eliminate the need for having any intermediaries and brokers. Farmers, retailers, and manufacturers can, therefore, claim premiums for some of their agricultural produce using this technology. Because it shares the information across many computer networks, it’s known as a distributed ledger. This technology will eventually help African farmers to access the international markets.

The technology will also make it easy for farmers in the developing countries to be able to access financial help since many of them cannot afford the capital that’s required to modernize their farming projects. The mobile banking technology will help keep track of the ledger fee and account to make it easy for the process to go through if in case they are being financed. With an estimated 2% of financial institutions giving farmers loans, financial access has been a huge constraint to agricultural production in developing countries. Blockchain technology will, therefore, offer a decentralized system that will provide reliable farmers’ identity and transaction history that the institutions can use. The digital information will enable farmers to obtain grants and loans that they need to develop their farms.

India Blockchain developer has the capability of solving many problems faced by farmers and those who are working in the food production industry. Farmers based in the developing world have always looked for technology that can make sense and deliver real value. The only challenge to this technology is linking compelling cases to viable business model technology. From micropayment system to digital identification management, blockchain based solutions have been described as one of the best things that can improve Africa’s, Caribbean and developing countries infrastructure and also push the new error to inclusive growth that can be enjoyed by everybody. It’s, therefore, important to hire expert blockchain developer.