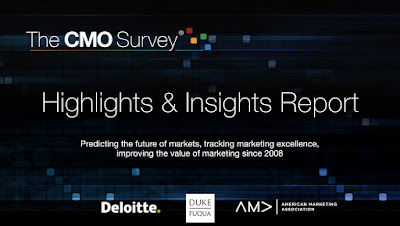 The findings of the August edition of The CMO Survey by Duke University’s Fuqua School of Business, the American Marketing Association, and Deloitte were published a few days ago. The latest results are based on responses from 341 marketing leaders at U.S. B2B and B2C companies. Sixty-four percent of the respondents were affiliated with B2B companies, and 95% were VP-level or above.

In this post, I’ll review a few of the major findings in the August 2019 edition of the survey. Unless otherwise indicated, the results discussed in this post are based exclusively on the responses of B2B marketers.

On average, marketing expenses amount to 9.8% of total company revenues across all survey respondents, up from 7.3% in the August 2018 survey. The percentages were slightly lower for B2B companies – 8.6% for B2B product companies, and 8.7% for B2B services companies.

The survey asked participants to indicate how their spending on paid media is allocated across seven specific channels and a “Paid Other” category. The following table shows the mean allocation for respondents from B2B product companies and B2B services companies: 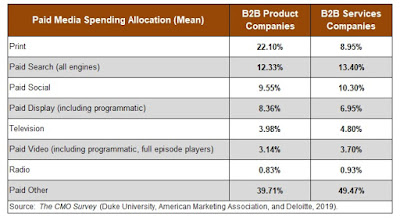 What stands out to me in these findings is the size of the “Paid Other” category. B2B product companies are devoting nearly 40% of their total paid media spending to the “other” category, while B2B services companies are devoting nearly half of their spending to that category. According to the survey report, when participants were asked to clarify which “Paid Other” media they meant, the respondents most frequently identified trade shows, sponsorships, and direct mail.

Survey respondents have also consistently said that the use of social media is not making a significant contribution to company performance. The survey has been asking participants to rate the contribution of social media marketing on a seven-point scale, where 1=not at all, and 7=very highly.

On the face of it, these results don’t seem to be logical. Why would marketing leaders substantially increase spending on an activity that is not making a significant contribution to company performance?

One possibility is that actual spending on social media marketing has not increased as rapidly as survey respondents were forecasting. An analysis in an earlier edition of the survey indicates that this has been true in the recent past, and I think it’s likely still true today. Therefore, I would argue that spending on social media marketing will not increase as rapidly or by as much as respondents in the August survey have predicted.