W Edwards Deming is often quoted as saying: “In god we trust, all others must bring data”.

His point was that if you want to improve an operation; hunches, beliefs and superstitions just won’t cut it. You need to have the data that shows what is really going on. No data, no improvement.

Unfortunately the data isn’t enough. Data by itself won’t tell you much, not unless you can interpret it properly.

Tragically, most people think that interpreting data is easy, but in truth, it is downright hard.

It is hard not to jump to the wrong conclusion

The Psychologist Thomas Gilovich studies the way people make decisions. He has shown how, when faced with difficult problems and data, most people jump to completely the wrong conclusion.

One of his nastier examples is the bombardment of London during World War Two by V1 and V2 rockets, or, as they were less than affectionately known, “doodlebugs“.

Flying bombs showered down on London in 1944 and 1945 killing thousands of people. The map below shows where they landed in central London. (Warning, it is less than pin point accurate, it was the best I could manage with a paper map and Power Point). 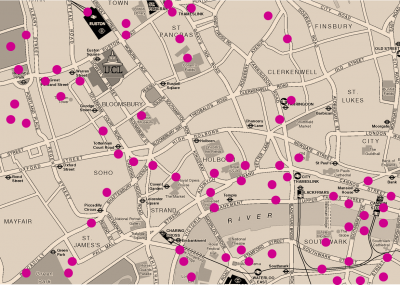 The bombs clustered along the banks of the Thames and to the North West over Euston and Regents Park. This is even clearer if I divide the map into quadrants. 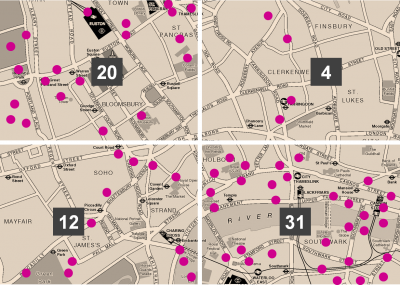 It was of obvious concern to Londoners that the enemy were so precise when firing their rockets from a hundred miles away in Northern France. Many speculated that German spies were living in Finsbury and Clerkenwell (north and east of the river). That would explain why that area was protected from the devastation.

But it was little more than point and shoot

The truth though was very different, all the Germans were doing was pointing the bombs in the right general direction and hoping they had put in enough fuel. If I cut the map diagonally, the evidence behind the “precision bombing” looks a lot less compelling. 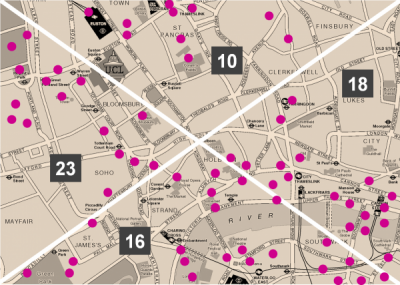 When is a pattern really a pattern?

So the pattern that everybody saw and recognised wasn’t really a pattern at all.

Which leads to my question:

Is that data about your business telling you something significant or is it just noise?

This is not the place for a detailed statistics lesson (and I would quickly reach the end of my knowledge). But if you don’t know how to answer my question you could do worse than employ and analyst or two who can.

If nothing else, it will save you from the embarrassment of accusing your neighbours of spying on you.