Are You Treating Customers Like Family? Two Lessons From Red Lobster and Frontier Airlines

Two acts of corporate kindness hit the news recently. The first involved a delayed flight on Frontier Airlines and the second a touching dinner at Red Lobster. Both resonated, quickly becoming viral online and hitting the mainstream news.

Captain Gerhard Brandner bought 38 pizzas for his passengers on Frontier Airlines. Their flight to Denver, already delayed one hour, was on the way from Washington Dulles Airport when it was forced to land in Cheyenne, Wyoming due to bad weather. After a couple hours on the tarmac, Brandner dialed up Dominos, met them outside airline security, and hand delivered the pies to the plane. According to the Captain, “I was getting hungry and we are kind of a big family here at Frontier; we take care of each other and I figured it was time to take care of my passengers.” Here’s Brandner in a CNN interview talking about the experience:

Taking care of customers like family, the captain put the $400 pizza tab on his credit card. Brandner mentioned he’s not the first Frontier pilot to feed passengers. It’s unclear whether he’ll be reimbursed for his act of kindness.

The second example involves Red Lobster in Columbia, Missouri. According to Reddit, a recent widow who had spent three decades of wedding anniversaries at Red Lobster had her check picked up by the restaurant. Her daughter had taken her to Red Lobster on the anniversary in order to keep the tradition alive. In lieu of a bill, the staff put this note in the folio: 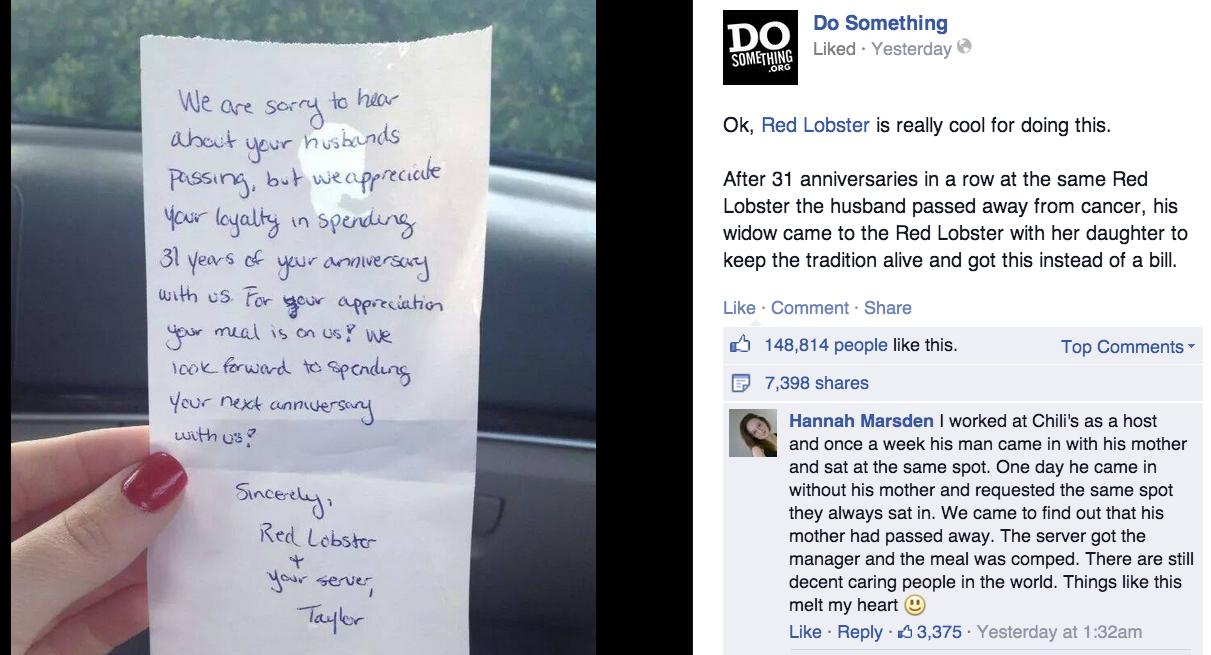 In an interview with Today.com, manager Chad Ward mentioned that he approached the customers as they were leaving. “I just let them know how important they are to us.” The 10-year Red Lobster veteran said, “I wanted to make sure they knew that we’d go over the top for them. Every guest that walks through our doors is very important to us.”

Are you demonstrating that you care? Here are the two lessons we can learn from Red Lobster and Frontier Airlines:

Acts of kindness are powerful. They resonate with your customers and have the potential to create a huge ripple effect through social and mainstream media. There are three types of acts of kindness:

Version 1.0 – Random Act of Kindness. We’ve all seen these campaigns before. Activations designed to create surprise and delight. One-off good deeds or unexpected acts such as paying tolls, filling parking meters, buying gas for consumers or picking up the tab. Usually a one-off feel good activation. This type, which was prevalent at SXSWi this year, draws upon gift economy principles. Giving with no expectation of immediate return, except maybe for potential PR value.

Version 2.0 – Branded Act of Kindness. These are next level acts of kindness. Here the item given is usually tied closely with the brand and its positioning. It’s less random, more planned and potentially a series of activations/experiences. This was demonstrated by Red Lobster. Two of their core values are genuine caring and hospitality.

Version 3.0 – Lagniappe Acts of Kindness. Giving little unexpected extras everyday as part of your product or service. A concept I refer to as a Purple Goldfish or the idea of signature added value. The practice comes from New Orleans and is called lagniappe (pronounced lan-yap). The business does a little something extra to honor the relationship. It echoes the sentiment of my recent article in Forbes. It’s not a campaign focused on prospects, but an everyday practice that’s focused on current customers of your brand. This is kindness embedded into your brand DNA. These are the little things that demonstrate you truly care about your customers. They serve to differentiate your product or service, drive customer loyalty and promote positive word of mouth. Need some examples? How about Enterprise Rent-A-Car’s Pick up / Drop-off Service, Southwest Airlines’ Bags Fly Free, Doubletree’s Chocolate Cookie, Five Guys’ Free Peanuts, Kimpton Hotel’s Afternoon Wine Reception, Zappos’ Overnight Shipping Upgrade or Red Lobster’s Complimentary Cheddar Bay Biscuits.

#2. Empower employees to do the little extra

Most employees care and want to do the little extra. But they can’t, typically because they are tied down by a corporate policy or rule. Great companies provide latitude for employees to solve a problem or demonstrate that they care. This involves providing limits on discretionary dollars for each employee. This is a page right out of the Ritz Carlton playbook. The legendary hotel empowers each and every employee to spend up to $2,000 on any single guest to insure their satisfaction. Similar to the Ritz, owner Chris Zane of Zane’s Cycles gives employees latitude to spend $100 to service a customer. To illustrate the effectiveness of this practice, Chris uses the metaphor of a bowl full of 400 quarters. During presentations he walks around with a bowl and encourages members of the audience to take quarters. Most take a few quarters, but no one ever takes the whole bowl. According to Chris, “The point is that when you as a customer are presented with more than what seems reasonable, like a bowl of 400 quarters, you will self-regulate….By providing more service than what folks consider reasonable we can build trust and loyalty and remind them how hard we’re working on their behalf.”Actions speak louder than words. Eighty percent of our judgements about people, companies and brands comes down to two factors: warmth and competence. Are you willing to go above and beyond the transaction to create a Human Brand? Are you ready like Red Lobster and Frontier to build warmth into your brand DNA and allow your employees to demonstrate that they care?

Today’s Lagniappe (a little something extra added for good measure) – Here is Chris Zane in a television interview on Fox Business:

How to Gain Authority through Customer Education

Employee Experience Drives the Customer Experience: But It’s Not Just About the Frontline

Why Your AI Project Is Failing To Deliver Value