Finland, it seems, is the happiest place on earth.

Yes, the Finns have topped the charts this year in the UN’s latest World Happiness Report ahead of Norway, Denmark, Iceland and Switzerland. 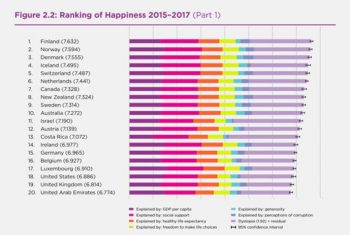 But look a little further down the list and you’ll see the United Arab Emirates (UAE). Not only has it retained its top spot in the Arab region for the fourth year running, more importantly it has cracked the top 20 globally, moving up from 28th spot in 2015.

So what makes for a happy place?

The Report measures 156 countries across 5 key values for well-being – income, health & life expectancy, social support, freedom, trust, and generosity – but the UAE’s happiness strategy adds another element, that of satisfying and exceeding expectations.

The UAE’s National Programme for Happiness and Positivity was launched on World Happiness Day (March 20th) 2016 under the mantra that “the genuine and sustained development of a community begins with a happy customer”. Their approach for achieving customer happiness has three core components:

1.Employees who take pride in providing excellent government services
2.Government entities that are dedicated to making customers happy
3.Positive and proactive customers who are willing to provide suggestions and contribute to the development of innovative services the creates happiness.

But the words happy and happiness creates something of a circular formula and it doesn’t get us any closer to answering the question.

Perhaps what we should first be asking is what is happiness?

It turns out there’s a discipline devoted to the study of happiness called hedonics and in an article written for Korn Ferry back in 2011 called Why Happiness Matters, Matthew Adler and Eric A. Posner discussed three possible ‘happiness’ definitions offered by the then research.

The first was subjective well-being or how we sense ourselves to be. The second was capability, as in how well we feel we exercise our abilities. The combination of these sounds like a composite of Mihaly Csikszentmihalyi’s concept of flow, the state of being he identified where our skills are challenged and all of the mind’s attention is forced to engage in the task at hand.

Adler and Posner’s third definition was one of satisfaction, or how well our preferences are being met/satisfied. In addition, they suggested that as a leader your objective is not to make people happy moment by moment (how unsustainable and exhausting that would be!) but to create the circumstances for people to be happy. And it’s this combination of circumstance and satisfaction that appears to form the well-spring for the U.A.E.’s goal of reaching the Top 5 on the Happiest Countries list by 2021.

How did they begin? 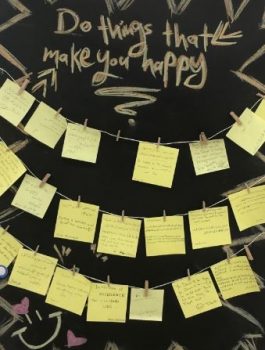 In 2016, the 2021 Dubai Plan was also launched with the goal of being the world’s happiest city by 2021. It makes for interesting reading. Divided into six perspectives, the plan breaks each of these into 3-4 aims. While that’s quite a lot of aims to be managing, what is encouraging is that each perspective has a set of clear KPIs against which it will be measured.

The Plan also clearly positions the government as the custodian of these developments and the people – and the skills they will need – as the ‘bedrock’ of delivering the strategy.

This might indicate that happiness must start at the top. That only when the mantra is issued from above can it move through the organisation to engage and empower the people charged with its delivery.

In this video, Robert Chavez, the COO for the Americas at Hermes, claims the key to Hermes’ ongoing success is hiring happy people in the first place.

But the key to sustained happiness must lie not only in an organisation’s ability to create or acquire it but also to embed it in its culture – to make it ‘the way we do things ‘round here’. And this requires three things:

Creating the legends and telling the stories that inspire and galvanise employees;
Deploying the right mix of methodologies to understand the evolving customer; and
Managing the dichotomy of embedding the best available practice based on current insights and technologies whilst having the strategic discussions necessary to prepare for the next set of challenges.

I will be watching for how these three elements develop along the UAE’s road to happiness…with interest.

*Thanks for reading. If you liked this article, please share*