This means that if you’re considering building a mobile app for your business, it’s ideal that you deliver an app for both platforms. Of course, this is only possible if time and budget allow for it. In a lot of cases, especially if you’re a small enterprise with limited resources, this isn’t always possible—and it becomes a choice between one or the other. The question is, what should you invest in first?

While it’s true that the smartphone market is split between Android and iOS, the truth is, Android holds a significant share. Recent statistics report that Android has a massive market share of 74.45%, with iOS trailing behind with 22.85%. 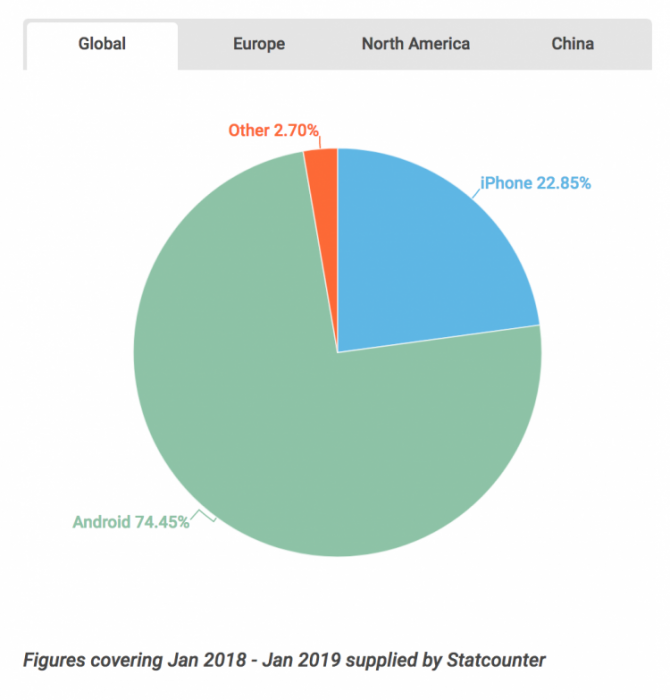 On the surface, this makes it seem like Android is the way to go. However, the market share shouldn’t be the only deciding factor.

1. Who is your primary audience?
One of the primary differences between Android and iOS are the kind of users they attract. The defining characteristics can be very stark. For example, Android may have a significant global market share, but Apple users spend more on the app store. Basic demographics also vary greatly. For example, in terms of geographic location, the US actually edges out Android users slightly. Everywhere else, Android maintains its significant lead.

This is why it’s so important to understand who your primary audience is. If you’re building an app that’s intended for a broader global or up-and-coming market such as Asia, Africa, and Latin America then it might make more sense to build an Android app first. Android users are also more likely to be used by people who work in technical industries and there is even research that claims men show a preference for Android over iOS.

If you’re planning to launch your app to a more niche audience in North America, then iOS might be your best bet. According to studies, iPhone users earn 40% more than the average Android user. 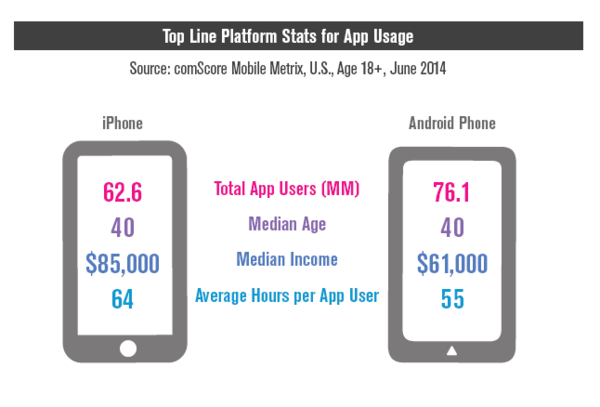 Image Source
They’re more popular in the enterprise market and preferred by women given Apple’s reputation for user experience and security.

2. What’s your deadline?
You’ve probably heard this phrase thrown around in tech circles: “Android is open and iOS is closed.” This is true in a sense. The Android OS can be used to create custom operating systems making it possible for users to tinker and modify the platform; while iOS makes it nearly impossible to do this.

To that end, most assume that building an Android app is easier and faster, when in fact, Android development is likely to be more expensive than iOS. Being an open-sourced platform, Android lacks the same level of standardization that iOS follows. This makes developing an Android app means you have to factor in more devices, components, and software fragmentation.

However, while it’s easier to develop an app for iOS devices, the Apple App Store also enforces stricter rules and quality control. This translates to a longer review process for approval. It may even come to a point where your app doesn’t get approved if it fails to meet Apple’s standards.

3. What do you want to offer in your app?
The open-sourced nature of Android makes it easier for you to build more diverse and innovative features into your app. So, if you plan to constantly improve your app based on functionalities that your audience wants, Android should be able to better accommodate this.

This, however, means that Android is more susceptible to pirate apps and malware. On the other hand, iOS is definitely more secure, but customizability is more limited.

4. What resources do you have for long term maintenance?
Generally, Android users are slower to adopt new operating systems. According to a report, more than 50% of Android users still have devices that run on systems that were at least a year old. 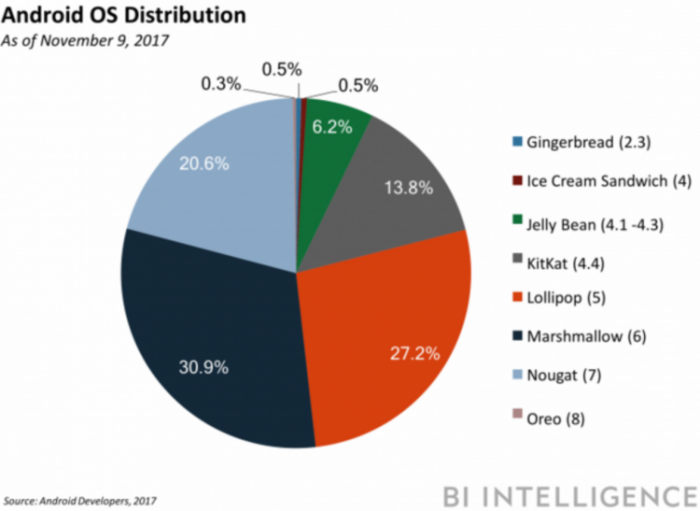 This means if you’re developing a mobile app for Android first, you have to make sure that you have the resources to provide constant maintenance for your app. Since Android users are slow to download and upgrade their current iOS, it’s up to you to ensure that your app is optimized despite running on an older system.

Apple users, however, regularly update their devices. This means while you may have to jump through more hoops to get it up on the Apple App Store, you won’t have to spend as much time and effort on maintenance.

5. What are your plans for monetizing your app?
Not all apps are made to generate revenue. It really all depends on your objective. If you intend to monetize your app, you need to know some key differences between Android and iOS.

For starters, despite the large margin Android users have over iOS users, the Apple App Store generates twice as much revenue than Google Play. This means Apple users are more willing to pay for apps and spend on them versus Android users.

This article originally appeared on the Sphinx Solutions blog and was reprinted with permission.

Rebranding and how to minimize the associated risks