What if a store had no cashiers or cash registers? What if at the entrance, there were turnstiles and you had to scan your smartphone upon entering the store? What if you didn’t need cash, credit cards or checks? That’s what the new Amazon Go stores are all about!

You check in with your Amazon Prime Account at the turnstile using your existing Amazon credentials to log in to the Amazon Go app on your smartphone. When you finish shopping, the receipt for what you bought is sent to the app once you leave the store. 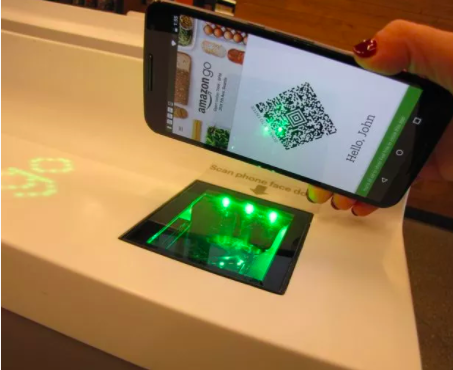 Camera and sensor detect when you walk into the store, as well as when you remove something from the shelf. Then the system automatically adds it to your Amazon account, using overhead cameras that work with weight sensors in the shelves to precisely track the items you pick up and take with you. When you leave the store, the Amazon Go’s systems automatically debits your account for the items and sends the receipt to the app. The system also knows when you pick up an item and put it back, ensuring that Amazon doesn’t dock you for something you picked to say, check the label, but not actually purchase. 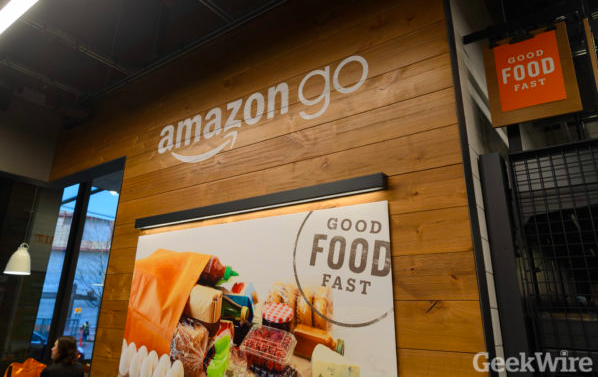 Amazon Go’s vice president of technology, Dilip Kumar, believes they are pushing the boundaries of computer vision and machine learning to create an “effortless experience for customers.” Amazon has been developing the “Just Walk Out” technology for ~five years. Amazon Go is part of a larger effort by Amazon into physical retail. This including its Amazon Books stores, Amazon Fresh Pickup locations and Whole Foods Market. The idea of the Amazon Go stores is that people are in a hurry and don’t want to wait in long lines. Hence the idea of “Just walk out.”

And if you were wondering if Amazon is linking Amazon Go with Amazon.com online, the answer is not yet. So if you pull an item off a shelf and replace it because it wasn’t what you wanted, Amazon isn’t currently showing you an ad for a related product the next time you’re online. Could be something they could do in the future? Perhaps. But there is a reason you put it back on the shelf. And that reason may not be apparent and thus may not warrant remarketing it to you. This Amazon Go Store, at 2131 7th Ave. in Seattle, and is open from 7 a.m. to 9 p.m. Monday-Friday.

The process of shopping at an Amazon Go store

Amazon needs a second headquarters. Why? Because it’s bursting at the seams in, Seattle. This is where Jeff Bezos founded the company in 1994. Amazon has transformed the city, employing more than 40,000. The downside is that expansion also contributed to Seattle’s soaring cost of living and its traffic woes.

And where might the new headquarter of Amazon be? Fourteen of the 20 were in the Eastern time zone. The shortlist of cities included: Atlanta, Austin, Texas, Boston, Chicago, Columbus, Ohio, Dallas, Denver, Indianapolis, Los Angeles, Miami, Montgomery County, Md., Nashville, Newark, New York, Northern Virginia, Philadelphia, Pittsburgh, Raleigh, N.C., Toronto and Washington according to the New York Times. This list was narrowed to these 20 cities from the original 238 cities that sent proposals with unique offers and incentives. Amazon plans to invest nearly $5 Billion dollars and create up to 50,000 jobs for it’s newest hub.

This made many cities desire to be among those chosen. Amazon asked contenders to tell them detailed information, including tax incentives available to offset its costs for building and operating its second headquarters, potential building sites, crime and traffic stats, nearby recreational opportunities, proximity to an airport, public transit, diverse demographics, connectivity and good, local schools with that could provide great potential employees.

The firm, Sperling BestPlaces, has good track record with prior picks, getting 15 of its top 20 picks that made Amazon’s short list, which included the top 11. According to Tech Crunch, the new Amazon Headquarters will likely bring $100,000 to the winning market over the next 10 to 15 years. In addition, they predict the chosen city will also benefit by a trickle-down effect as Amazon employees may start their own companies in the future, spurring more new growth for the city.

The competition has entered part of into pop culture, as SNL did an Amazon HQ2-themed skit. Alexa announced the hopeful with representatives from those cities who came bearing gifts for CEO Jeff Bezos:

Cities that were picked received a short note from Amazon, letting them know Amazon wants to continue to learn more about the city’s community, talent, and potential real estate options. Amazon said as they reviewed all the proposals, they learned about many new communities across North America that they may consider in the future. The selection process, according to the New York Times included economists, human resources managers and executives who oversee real estate.

Where will the final Amazon Headquarters be? What’s your guess?