This story was originally published on Forbes:

This is the story of a renegade cow. Nearly two decades ago, paintbrush in mouth, a cow painted three words on a billboard… EAT MOR CHIKIN. It was an instant success.

Created by Dallas-based The Richards Group, Eat Mor Chikin was introduced in 1995 as merely a three-dimensional outdoor advertising execution.  The campaign was so well received that The Richards Group and Chick-fil-A turned the billboard concept into an integrated campaign. Early extensions included  in-store point-of-purchase materials and a radio commercial. Two years later in 1997 the cows would make their TV debut. The following year an annual calendar was created. All mediums were leveraged. Rising to new heights in 2008, the cows covertly painted their first water tower. The Cows were not only popular, they were like-able. In 2011, their Facebook page was created and they now boast over 750,000 fans.

I’m a fan of the cows, yet I feel that traditional advertising (no matter how cute) tends to fall short because it only caters to the eyes and the ears. Great brands find ways to extend advertising to create experiences that reach their hearts of their customers. One extension of the Cows campaign creates an engaging experience. Enter Cow Appreciation Day every July. This year Chick-fil-A restaurants across the country celebrated the 10th anniversary of the chain-wide event honoring their beloved Cows. 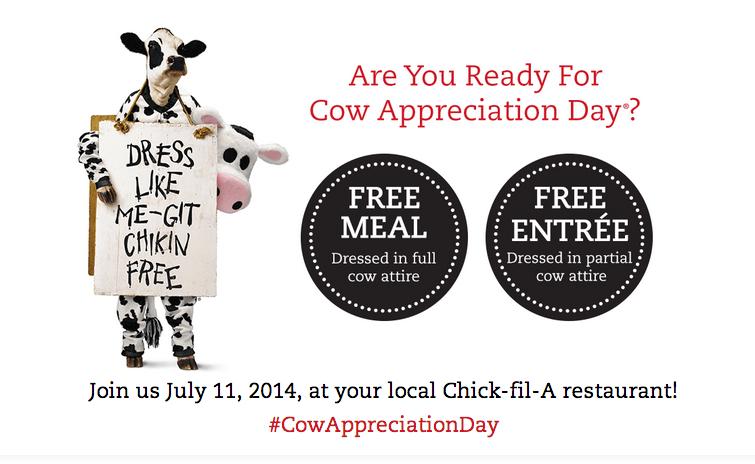 According to Chick-fil-A, more than 900,000 cow-dressed customers hoofed out to Chick-fil-A restaurants nationwide for Cow Appreciation Day last year. The chain now boasts a fully dedicated website for the event and expects to host more than one million cow-clad guests. They’ve provided incentives for fans. Dress partially as a cow and you receive a free entree. Dress head to toe and you receive an entire free combo meal.

Chick-fil-A has a nicknames for customers who dress up. They are called “raving fans.” Of the seven to 10 million people eating at its restaurant each week, this is a rabid subset, about 10 to 15 percent of its total audience. They typically visit Chick-fil-A four or more times each month.Chick-fil-A also captures stories of customers on their website. This story called “Year of the Cows” comes from mskripsky:

For the past six years, my friends and I have celebrated Cow Appreciation Day at our local Chick-fil-A. Although we’ve been getting older through the years, it has never stopped us from having a memorable night. We gather at my house, dress up like a cow, take a ton of silly pictures and head to Chick-fil-A.

Each year we have about 10 friends or so line up in a conga line and chant “moo moo moo moo moo” as we enter the restaurant. Of course every employee and customer just stares at us, but it’s nice to see everyone smile and some even join in. The best part is seeing the store managers face gleaming and saying that was the highlight of his night.

This year will be our last year together, as all of us have gotten married are going to med school or are moving away. However, we are still hoping our legacy of Cow Appreciation Day will carry on.

I love how Chick-fil-A celebrates it customers and encourages them to be creative. Need help to create your own costume? No problem, Chick-fil-A provides a starter kit of ideas and resources.

Fun events at Chick-fil-A are a staple for the brand. Daddy-Daughter Date Nights are an annual event. Not to leave Mom’s out, just last year the restaurant created a medieval-themed event called Mother-Son Date Knight.“One of Chick-fil-A’s goals is to promote community connections and enrich the lives of everyone we come in contact with,” says Erik Amick, a Chick-fil-A franchise operator. Even infants are given consideration. This is perhaps my favorite little extra at my localChick-fil-A in Cary, NC. It’s tiny cups of Cheerios for customers in training. 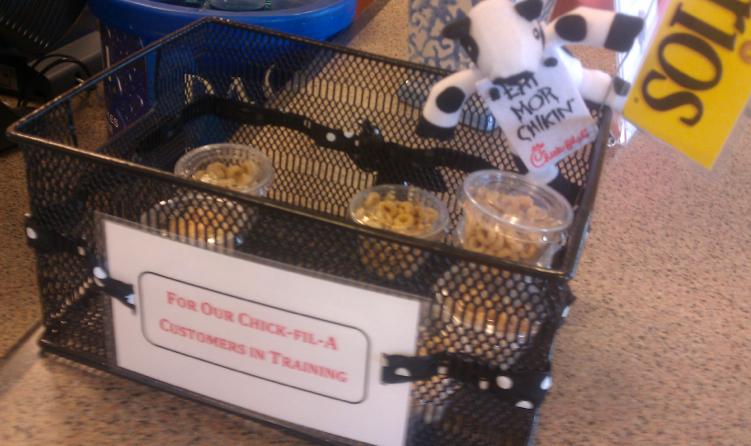 Does your brand create opportunities to connect with consumers? Are you creating a legacy experience like Cow Appreciation Day?

Today’s Lagniappe (a little something extra thrown in for good measure) – The Phelps family got into the act this year. Jenn did an awesome job on the costumes: