As you know, at the end of every year, I love to look back and forward to find out which trends have left their mark in the past months, and which ones are going to have a huge impact the coming year.

This first blog is dedicated to the trends that have surfaced in 2020. Now, we all know that the major trend of 2020 was health-related. In fact, I already serendipitously predicted this at the end of 2019, stating that “Every company is becoming a healthcare company”. Although I obviously never realized just how true this would actually, and tragically become. But as I have already reported so much about trend that on my blog, my clips and my podcast channel, I decided not to include that one here. Yes, it’s major, but much has already been written about that. It’s for the exact same reason that I will not include the working from home trend, either. With this article, I rather wanted to uncover some less obvious evolutions, in the hope that they will inspire you. Here goes: 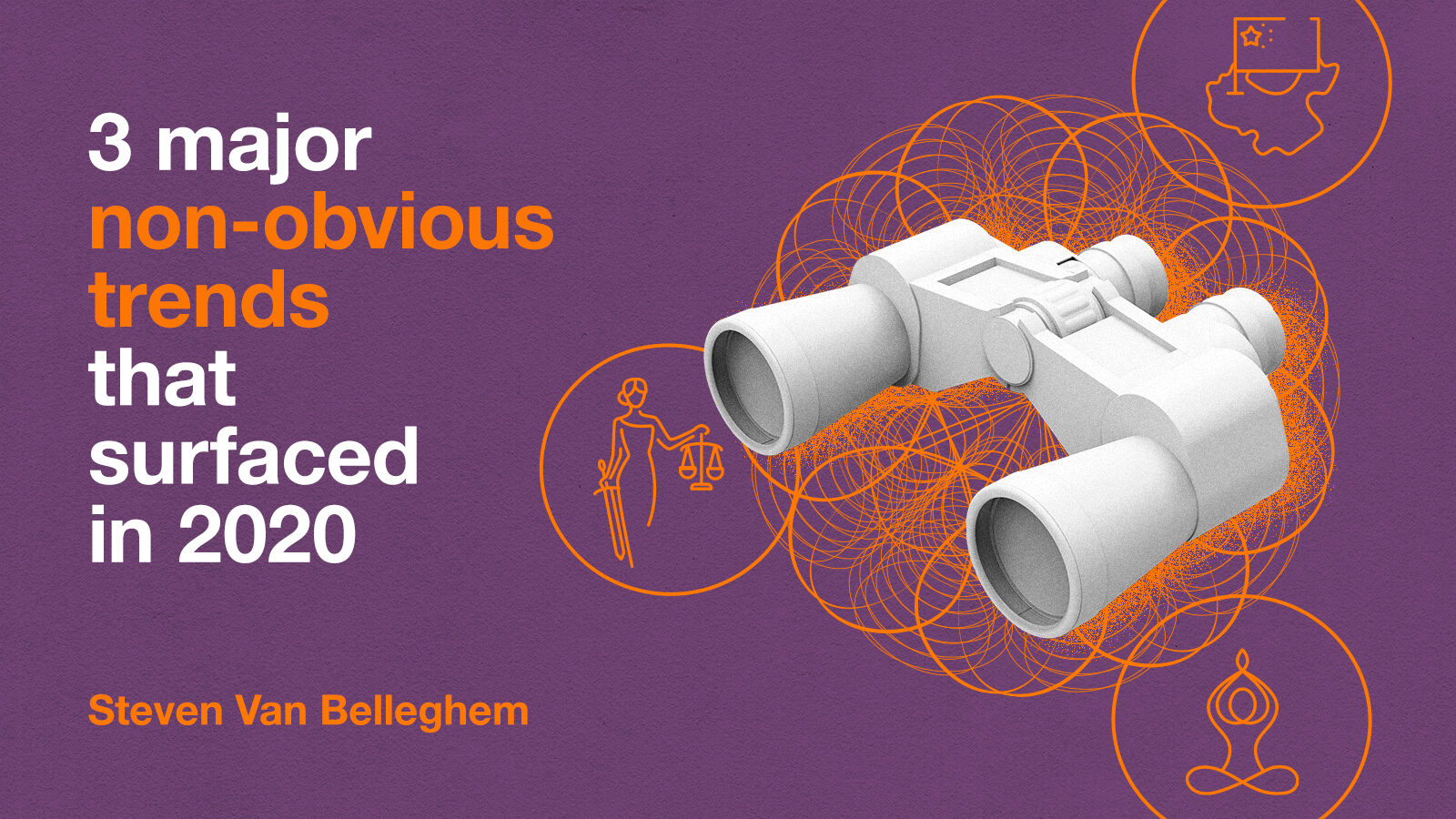 At the end of 2019, I wrote in my “State of the Year” blog that “The West is becoming the copycat”. Now, when it comes to following China, this year we’ve seen several commerce trends surfacing in the West that have quite literally been copy-pasted from Chinese companies like Alibaba and Tencent: social commerce, influencer commerce and live streaming. I call this China-inspired trend C-commerce. If there is one thing that companies have learned these past months, it’s the importance of integration and the use of digital channels, to ensure a smooth and frictionless offering. As we are spending an increased amount of time on social media, for instance, it’s only natural that this channel should become the one where we could also shop for clothes or books, order tickets, buy food and many other things. And at the same time, as our lives have mostly been confined to our homes, it’s natural that retailers in the West, too, are increasingly livestreaming their offering. In the Chinese market, this type of streaming commerce is already worth about $ 5 billion. AliBaba launched it for the first time in 2017 on Singles Day, with a fashion show called “See now, buy now”, where consumers could buy live creations from as many as 80 brands such as Adidas or Gap. China’s perfect blend of online and offline and its heavy use of influencer marketing is also entering the European market. A beautiful example is that of clothing retailer C&A and its TikTok- shop window, a première in Belgium: huge phone-like screens in the window display several influencers quickly changing outfits to show their favourite looks of the season. Consumers, too, can participate and record similar videos in the fitting rooms, getting a crack at getting selected for display in the shop windows as well.

MediaMarkt, for instance, introduced Live Shopping in Belgium: live broadcast video sessions in which consumer products are presented and tested. Walmart, then, launched the “digital toy box” Wonder Lab as a part of its digitally-focused holiday 2020 campaigning, where kids can virtually unbox and play with toys. The site is designed to give kids a way to safely test out toys amid the pandemic and at the same time serves as an entertaining distraction. Clever marketing combined with a “Partner in Life” (offering kids distraction and parents some quiet time during the lockdown) strategy. Walmart seems to be very serious about this China-inspiration, as it is still considering to invest in the US version of TikTok together with Oracle. That’s a clever move that will allow it to become one of the first retail movers in the West to dabble in social commerce – where users can buy products directly on social channels – and also increase advertising space. Facebook, too, is looking in the direction of social commerce with payment services – launched via pincode, fingerprint or, soon, facial recognition – available through Whatsapp in Brazil, in a partnership with MasterCard and Visa. Youtube is also investigating the possibilities here, as it has been preparing to add general shopping functionality to its videos, asking creators to tag and track products featured in their videos, which will be linked to analytics and shopping tools from Google.

The past year has pushed the Information Age in a new direction. More specifically, I believe that entertainment and social platforms have played a crucial part in keeping people mentally sane during the pandemic. (So, ok, I will be talking about health, after all, but mental health and not physical and COVID-related health.) They are our doors towards the outside world, keeping us connected with others, helping us grow and even making sure that we keep having fun. I believe that the companies in this segment – Netflix, Disney+, Twitch, Instagram, Facebook, Zoom, Microsoft Teams, Youtube, etc. – will have a growing and diversifying influence upon our social fabric, helping people stay happy, sane and in flux. Some very distinct evolutions, diversifications and investments this year have been showing us that they too have perfectly understood this. For me, the concept of “essential industries” will start to shift in a direction beyond physical health, towards mental health and mental development and the above players will play a huge role in that.

We see for instance the growth and diversification of Instagram’s influence through its evolution from a purely social and visual channel, to one that is steadily becoming an important source of news for many of its users: where only 4% used to regard it as their main source of news, this has grown to 11% in 2020. Facebook, then, has been turning back to its roots, targeting university students with a separate community and newsfeeds. Youtube organized the 10-day global “We Are One” filmfestival, co-curated by over 21 film festivals from across the world, to help fight COVID-19, support the movie industry and help people stay entertained.

Other pure entertainment players, then, are moving into the segment of education. British state broadcaster BBC offers youngsters a broad assortment of lessons with its free online study support resource platform Bitesize. Netflix, has a broad array of educational shows and documentaries for teachers  and offers a Chrome extension – Language Learning with Netflix – that allows to study languages with films and series. Google then, launched the “Google Career Certificates”: a collection of courses designed to help participants get qualifications in high-paying, high-growth job fields without attending university. All of this may really be just a start. I’m very curious about what new experiments will surface next? Youtube opening a psychoanalyst channel? A Facebook Doctor functionality? Instagram or TikTok giving mental health notifications? Who knows?

I believe that we will see major shifts, convergences and industry-hopping in these segments in the coming months. I also believe that mental sanity and emotion control is going to open up a huge billion dollar market in the coming years. We’ve seen trickles of this in 2020 – for instance with Microsoft that is planning to add mental health monitoring in its Teams applications, helping companies better deal with the mental health issues of their employees – and I believe this will become the norm.

This might be one of my favorite trends of 2020, as it has a direct link with my very first work of fiction ‘Eternal’ (available in Dutch to order here): the ‘war’ on ethics, in the midst of a lot of social turmoil about inequality, bias and racism.

There were actually 2 dynamics here: first of all, we saw a real concern from a lot of tech companies on fighting bias, racism and fake news in response to the public’s need for more ethical best practices. That’s the ‘light’ part of the equation. IBM, for instance, no longer allows the police to use its facial recognition software for racial profiling, making sure to never again unintentionally facilitate racism. Amazon, too, announced a one-year moratorium on police use of its facial-recognition technology, yielding to pressure from police-reform advocates and civil rights groups. Microsoft President Brad Smith announced that his company has not been selling its technology to law enforcement, until there is a national law.

In the battle against fake news, Twitter added a fact-check label to a tweet about mail-in voting of a – consequently very angry – Donald Trump. After which it added a warning filter to other tweets for violating its rules against promoting violence. It also is testing a feature that aims to discourage users from sending a reply using language that could be “offensive or hurtful”: when a user hits “send” on a reply that includes “language that could be harmful,” the Twitter app for iOS will show a popup message, offering the opportunity to revise the tweet and remove the language or post it anyway. Both Facebook and Twitter have been taking down QAnon – a very bleak far-right conspiracy theory – pages and accounts to fight disinformation.

Tech companies have not only been self-regulating to become more ethical. Governments and other parties have joined this project as well. In October, US Congress unveiled their nearly 450-page antitrust report finding Amazon, Apple, Facebook and Google each hold monopoly power and, in some cases, should have parts of their businesses effectively broken up. On the other hand, several companies, like Epic Games (developer of the video game Fortnite), Spotify, Facebook and Microsoft have raised concerns about Apple’s unfair practices in its app store.

So there’s the tech giants battling informational and social injustice from the governmental and public side. And the governments battling power injustice from the tech side. And then there are those – and this is the second dynamic, where it gets really dark – pretending to care for ethics and the rights of the public and using it as an excuse for their own hidden agenda. And when I say ‘those’, I mean the likes of president Trump. When he was targeting companies like TikTok and Huawei on the grounds of national security and identity theft, he was just pushing the US-Sino trade war to a new height. And let’s not forget his personal vendetta against TikTok since a group of its users trolled the Trump campaign into expecting a Tulsa rally crowd that never came. Or his anger at the “Get the facts about mail-in ballots” Twitter label resulting in an executive order calling for a rewrite of Section 230 of the Communications Decency Act, which provides a shield to online publishers from liability for content generated by users.

So, even though the ‘fake ethics’ trends from less bona fide players is terrifying, it’s above all fantastic to see how governments, users and tech companies are all trying to keep each other in check and ethical.