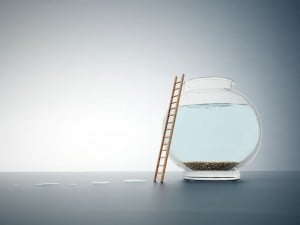 Looking back on 2015, I am trying to find the one thing that surprised me in the research and work we did for customers during the year. There were many learnings, but the one single thing we identified, where the disconnection with customers was significant and the resulting experiences were poor, was fear.

Not the kind of fear that results in a child screaming “there is a monster under the bed”, but a silent, paralysing fear that manifests in ways other than deliberately identifying it and expressing it as fear.

Some of the manifestations included:

Staff who do their work on autopilot without feeling or thinking too much about it
Staff who have stopped trying to make a difference; they are compliant merely to earn a living
Leaders sticking to autocratic and critical parent leadership styles, remaining in denial about the sustainability of the way they are doing business
Leaders blaming many other factors rather than looking closely at how they lead and inspire people
Disempowerment that results in customers being told “These are our rules”
Staff who have lost pride in their work and merely do what they are told
Staff who pay no attention to detail and have lost the ability to look at things as if they are seeing them for the first time
Staff illustrating no problem-solving abilities as a result of this paralysing fear. No risk taking or stepping out of the comfort of tried and tested answers.

In the face of fear, emotional connection and the willingness to creatively solve customer problems just disappear.

Elizabeth Gilbert says fear is necessary, evolutionary vital, but it is not a very smart emotion. When fear goes unrecognised and unacknowledged, bad things happen. Especially in service, where customer connection is vital, experiences suffer as a result of this contagious fear.

Fear is the number one enemy of great Customer Experiences!

But there is good news.

So you ask, what is the antidote to fear? First, it really makes sense to identify what the fear is about, and unfortunately it is not as easy as asking your people, “What do you fear most?” Most of the time, the question in itself causes paralysis.

Let’s look at the human needs as identified by Tony Robbins:

Certainty
Variety
Connection and love
Significance
Growth
Contributing beyond oneself.

I believe that when these human needs are not fulfilled, it will result in fear that might manifest in the ways described above. This then leads me to conclude that there will always be fear and that we will always need to have some strategy to combat fear. I smile just thinking about raising this at the next board meeting of many of my clients, saying “Hey, I have a break-through that will lead your organisation to grow, differentiate itself and become a market leader. You need to have a strategy to combat fear in your organisation, and not only that, but a strategy that transforms fear into courage.” I see you smiling too, but the critics and the pessimists will come around, maybe just before their organisations go out of business ̶ but maybe not.

So let me share with you how I suggest you combat fear, and then you can decide if you want to incorporate it into your strategy and next board discussion.

Listen to fear and start setting the volume
Fear does not have an on or off switch. It is always on, but it has a volume dial and it is up to each of us to control the volume of the voice that warns and sometimes paralyses us. However, fear does not like us using the volume dial and there is something fearful just in touching it. You also don’t simply overcome fear or learn to adjust the volume once. It is really like music. You listen to different songs and you like to set the volume according to your mood. This is how you deal with fear, and I can tell you, fear has many lyrics.

Identify the needs that are unmet and start focusing on them.

Let me give you some examples:

One of my clients has a staff corps that have been severely deprived of personal and professional development as a result of leadership just not paying attention to people’s growth. Consequently they are not confident about their own skills and fearful of being retrenched as a result of skills not meeting the business requirements. This environment needed a focus on certainty, variety and growth. By focusing on grow and teaching people new skills, you initially induce fear and uncertainty. Typically people will ask themselves the following: “Will I be able to do this?”, “Am I lacking in skills? Is that why they are sending me for training/coaching?”, “What if I fail?”. So it is essential that you position the growth appropriately and teach people how to overcome fear in smaller dosages. Growth also enforces a sense of significance.

Through learning and coaching you can teach people to overcome fear in small steps; just have the courage to take the next step and then you turn the fear dial to the volume you are able to handle.

Develop an internal dialogue with fear
Remember, the lizard brain does not rationalise fear before it induces a fear reaction. It just does so instinctively.

Often, when I have had to deal with angry clients, I have felt fear. Now, for those of you who are in denial about ever feeling fear, let me describe what fear feels like. You have sweaty palms, feel slightly dizzy and have a heavy feeling in the pit of your stomach, you feel like sighing, your muscles tense up and you are great with legitimate excuses why you cannot deal with this issue at this point.

Having that internal dialogue often calms the lizard brain. My dialogue goes like this:

Why is the client angry? “We sold him a defective product.”
Is he really angry or is he just scared? “He is embarrassed because he gave it as a gift and the person who he gave it to will think badly of him.”
What did we do to make him feel fear? “We did not check the product when we gave it to him and we have not taken his previous calls. We have disrespected him.”
What can I do to solve his problem? “Refund him and replace the product with a fully working one. Show understanding of the fact that we have delayed solving the problem and caused the client to be angry.”
What is the worse that can happen? “He can shout and put down the phone, and then I phone again later.” The client will always speak to you the second time.
When we teach front-line staff and their leaders to have this internal dialogue, the monsters we have created in our mind disappear and we are much better able to manage our own and other people’s emotions to the extent where positive engagement takes place.

Fear is a tough subject to write about and an even tougher one to tackle in corporations as part of a growth strategy.

My wish for you in 2016 is that you will evaluate the role fear plays in your organisation and the limitations it puts on a real connection between your staff members and between them and your customers. I hope you will discover the impact of fear in your own professional and personal life. Start with small steps, find that volume dial and start the conversation with fear. Ask it to just step out of your way a little, and relieve the limiting impact it has on your career and your relationships.

This article is about Customer Experience and how fear limits real human connection, but it is also about acting on and managing fear in order to live a more connected life.

I will end with the speech that inspired the title of Brene Brown’s book, Daring Greatly. May you dare to manage fear in 2016!

THE MAN IN THE ARENA

Excerpt from the speech Citizenship in a Republic delivered at the Sorbonne in Paris, France, on 23 April 1910.

“It is not the critic who counts; not the man who points out how the strong man stumbles, or where the doer of deeds could have done them better. The credit belongs to the man who is actually in the arena, whose face is marred by dust and sweat and blood; who strives valiantly; who errs, who comes short again and again, because there is no effort without error and shortcoming; but who does actually strive to do the deeds; who knows great enthusiasms, the great devotions; who spends himself in a worthy cause; who at the best knows in the end the triumph of high achievement, and who at the worst, if he fails, at least fails while daring greatly, so that his place shall never be with those cold and timid souls who neither know victory nor defeat.”