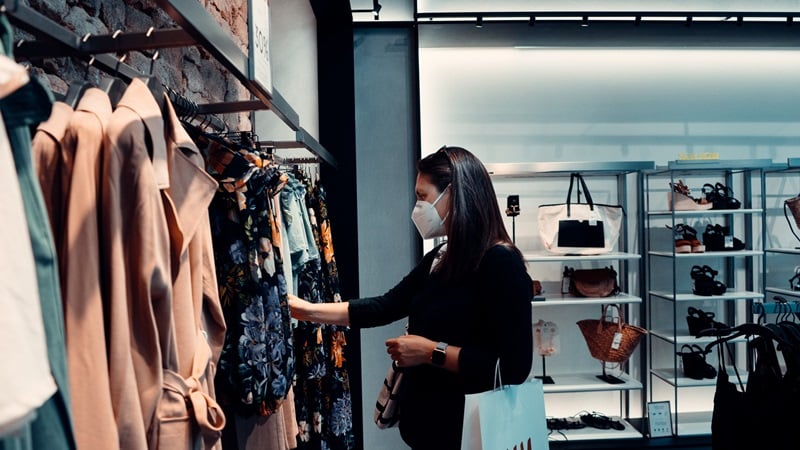 One thing that can surely be said about 2020 is that it has been a year of change. The pandemic left no sphere uninfluenced: how we work, how we have fun, how we interact with our loved ones – all of it has experienced a dramatic change due to the COVID-19 pandemic.

The holiday season won’t be an exception. Needless to say, celebrations in 2020 will look nothing like it did in 2019 and that encompasses all areas: starting from family gatherings and finished with gift-giving.

While online shopping has been growing in geometric progression in the last decade, the Covid-19 pandemic is expected to give it a larger boost than anyone could anticipate before all of us were sent to our homes for an indefinite period.

Yet, make no mistake – in-store shopping is still a huge thriving business, especially when it comes to holiday seasons. According to research, in-store holiday shopping is expected to see around a 30% decline in the 2020 season compared to 2021, as only 60% of consumers are planning to visit stores this holiday season (in 2019, over 87% shopped for holiday season in-store at least once).

Meanwhile, online shopping is supposed to see a boost – while the number of people shopping online isn’t expected to see dramatic growth, those who used to combine in-store shopping with online-shopping are expected to stick to the latter.

2. Safety seems to be the biggest motivator

It seems that the biggest concern the consumers have is that the pandemic isn’t being taken seriously by a large swath of people. Around 70% of respondents have mentioned that having to be too close with other people in closed quarters and wanting to avoid coming in contact with those who refuse to adhere to safety standards.

It’s been found that the biggest influencer on the consumers’ decision to go in-store shopping versus staying at home has been ads that highlight the importance of staying safe during the shopping experience. Ads like that have the biggest chance of convincing the potential client to visit your store!

The second most effective type of ads has been – unsurprisingly – the ones offering some kind of a gift. Free stuff is as strong a motivator as ever before. Maybe now even stronger than ever.

4.  Consumers are thinking about tightening their belts while shopping

It’s no secret that the pandemic has greatly influenced the purchasing power of the majority of the population. While most people are still planning to celebrate the holidays, Corona be damned, they’ve had to make adjustments according to the current reality: they will still be spending money, but they will not be spending as much as they initially assumed. According to research, on average consumers have budgeted around 100$ less for this holiday season compared to 2019 one.

Black Friday and Cyber Monday seem to be an exception many are willing to make though. It seems while the Corona effect has made the consumers ever more sensitive towards financial matters – it has not influenced their love for good deals.

Many have said they are planning to do the bulk of their holiday shopping on Black Friday and Cyber Monday. And they aren’t against spending more than they’d planned if they manage to

6. Many are planning to start shopping earlier

Consumers have also mentioned that while Black Friday and Cyber Monday are “priority dates”, they don’t plan to leave the shopping to the last minute.

This holiday season is likely to see some people making their purchases earlier or over a prolonged amount of time to better distribute resources and find the best deals available.

7. No big gatherings and family celebrations

Since a large amount of customers is prioritizing their health this season and are planning to stick to the self-isolation recommendations, the number of large gatherings is expected to decrease dramatically. Which in turn is expected to influence purchasing priorities – first and foremost, this concerns food and drinks, but gift-giving as well.

8. Deals and partnerships (with credit card companies) seem to be more of motivation this season

This season is seeing a bit of an increase among those, who are going to pay attention to the deals and partnerships their credit card companies offer – and who plan to utilize them to the fullest.

While cashback and gifts have ever been a powerful motivator for credit card users, this season they seem to be more diligent about it.

As mentioned above – free stuff is a powerful motivator. So are the discounts.

9. Supporting small business seems to be in trend

One of the biggest trends of the 2020 holiday season is the fervent support for small businesses. Unsurprisingly, this trend is heavily influenced by millennials, whose negative opinion of big businesses seem to be growing stronger year to year.

More people have mentioned that they intend to make purchases from small businesses and support minority-owned businesses than shopping at big and well-known brands’ stores (10% to 8% to 7% of potential consumers).

Since a lot of these small stores nowadays offer online deliveries, it wouldn’t be surprising if more people who have yet to make their decisions about holiday shopping, swerved towards supporting them in some way.

10. No Traveling (either for fun or, yes, shopping)

While it may come as no surprise, but most people will be trying to avoid traveling for this holiday season. And that includes not just across states for family gatherings, solo gateways, or fun events (most of which have been shut down anyway, due to the pandemic), but also across towns or even districts for shopping.

A substantial amount of those who do still plan to do in-store shopping this season, are planning to do so locally, without having to travel to a specific destination for specific purchases.

How a Customer Experience Professional Deals with Angry Customers

Best Practices in Implementing a Customer Data Platform for Retailers

The Future of Work Will Remain Flexible, but Keeping Employees Properly Connected is Key