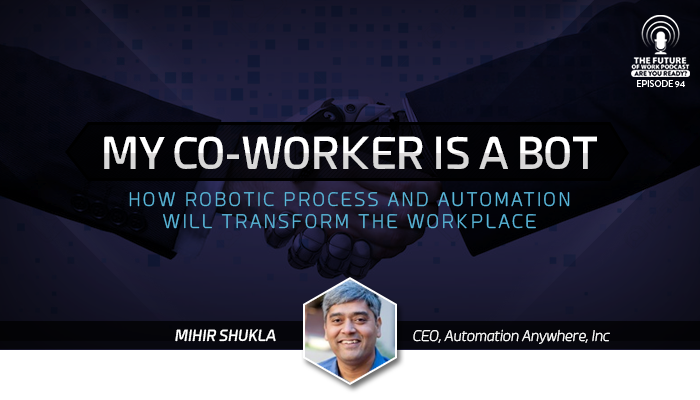 What is in this episode and what you should care:

Mihir Shukla is the CEO of Automation Anywhere, an enterprise software company. They are redefining how work gets done by introducing the idea of a digital workforce platform and digital workers that work alongside human employees. This combination is designed to help the human employee accomplish more than they ever could alone. Automation Anywhere has 300 hundred employees in 10 offices worldwide. Mihir’s goal is to become one the world’s largest employer without having any employees. How will they accomplish this? Projections show in the next four years, Automation Anywhere will reach 3 Million software bots worldwide which are producing at the capacity of 3 Million people. While they are a software company, the production levels are so high that they are the world’s largest employer in the digital age.

Software bots are digital workers. They can complete mundane tasks, and also tackle more complicated problems as well. Many employers want their workers to complete today’s problems and tomorrow’s challenges. However, we still have yesterday’s job to do as well. Processing invoices, verifying documents, generating reports, data entry, and other tasks still need to be completed. The workforce has been spread very far and work/life balance is not yet where it should be. Introducing mundane and complex tasks to the digital workforce allows the human employees to think, create, discover, and innovate. The man and machine partnership isn’t new, and has allowed the world to advance in countless ways. This concept has now trickled down to our offices, and the outcome can be nothing short of spectacular.

Many people cannot tell the difference between if a bot or a human completed a task. Automation Anywhere provides learning bots that learn from human behavior. There are many industries that use bots, and people interact with them on a daily basis without ever knowing. Airline processes, car production, even a pen sitting on your desk could have been created using a software bot. The addition to these bots have allowed workers to have less stress while doing their jobs, provide better service and even reclaim work/life balance in some cases. The bots have allowed human workers to be less of a robot themselves at work and reclaim their humanity while preforming their jobs.

What you will learn in this episode:

Link From The Episode:

The post The CEO of Automation Anywhere on How Robotic Process and Automation will Transform the Workplace appeared first on .

The State of Trust in Business

Internet of Things (IoT) in Banking: Examples of IoT Solutions In Finance