I spent quite a bit of time debating with myself how to classify CaliberMind. But instead of presenting my conclusion and defending it, I’ll just tell you what CaliberMind does. We’ll circle back to classification at the end. 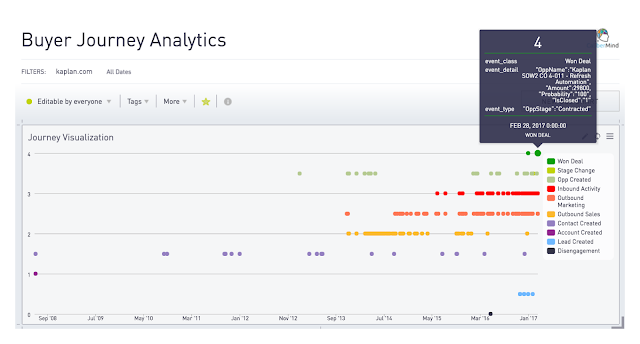 Report on journeys. CaliberMind system builds an account-level journey visualization that shows different types of events (outbound contacts, inbound contacts, account created, opportunity created, deal won, etc.) on parallel time lines. It imports opportunity stages or account statuses from the source systems rather than creating its own journey stages. Attribution reports show the timing of different types of contacts relative to the date of the final sale, aggregated across multiple accounts. The system doesn’t explicitly report the impact of different contacts but it does consider their effects when recommending which messages to send next.

Create personas. Users can define a list of personas and then assign them profile attributes such as job titles or company sizes. More interesting, they can also submit texts related to each persona. These might be job descriptions, advertising copy, blog posts, video transcripts, email messages, or anything else written in English. (Other languages will be added in the future.) The system uses natural language processing to analyze these and build a profile of what they have in common. This can later be used to determine how closely other texts match each persona. The system can also classify new contacts by persona, based on their profile attributes and associated texts such as content consumed or emails written. The assignments can be adjusted over time as new information becomes available.

Match content to individuals. CaliberMind also uses the texts associated with each contact to build a personal profile. Because the language processor can understand things like level of interest, buyer role, and stage in the purchasing process, it can identify new and generate alerts about important events. The system can also pick up references to other individuals and infer their own roles and interests.

Push results to other systems. CaliberMind draws on its individual-level profiles to push personality insights, engagement tips, and content recommendations to sales people. These can be loaded into the CRM database or displayed in a window on the CRM desktop. CRM users can also see the account-level journey reports and revenue summaries including forecasts. Marketing automation systems could get the same details but usually take more general information, such as persona codes used in segmentation. User-created rules can pick records meeting specified criteria and send them to different marketing automation campaigns. A Salesforce app is pending approval on the App Exchange and Salesforce single sign-on is scheduled for later this year.

Expose detailed data. CaliberMind’s own interface lets users examine the data loaded into the system. Individual-level reports can display details down to the level of single emails or Web visits. These reports are used by marketing, enablement and sales operations teams, not sales people.

Given all these facts, how should we classify CaliberMind? Its data unification and access features clearly qualify it as a Customer Data Platform. Its reporting, natural language processing, persona building, and recommendation features make it an analytical and machine learning system although it doesn’t do predictive lead scoring in the usual sense. Content recommendations and engagement tips to sales people make it a sales enablement system, which is an uncommon combination with a CDP. CaliberMind itself calls its system an orchestration engine. Orchestration typically involves predesigned marketing campaigns, which CaliberMind doesn’t have. But it can push segments to marketing automation lists that are associated with campaigns. More important, CaliberMind recommendations can be exposed to different channels simultaneously, which is a more dynamic and precise form of orchestration than predesigned campaigns. So let’s give it that label, too.

CaliberMind was released last summer and currently has eleven clients including a mix of mid-size and enterprise B2B companies. Pricing is based on number of contacts and data sources and starts at $2,000 per month.

When CX Crosses Paths with Personalization: 3 Imperatives for 2020

You’re Not Building A Website—It’s a Conversion Tool

Role Of RPA In Succeeding Your Business In 2020

How your Company Culture can Transform Customer Experience?